Most chips are actually a collection of chips created on top of a 12-inch silicon wafer and are processed in a chip factory in a batch. But the Cerebras Systems chip is a single chip interconnected on a single wafer. The interconnections are designed to keep it all functioning at high speeds so the trillion transistors all work together as one.

In this way, the Cerebras Wafer Scale Engine is the largest processor ever built, and it has been specifically designed to process artificial intelligence applications. The company is talking about the design this week at the Hot Chips conference at Stanford University in Palo Alto, California.

The chip comes from a team headed by Andrew Feldman, who previously founded the micro-server company SeaMicro, which he sold to Advanced Micro Devices for $334 million. Sean Lie, cofounder and chief hardware architect at Cerebras Systems, will provide an overview of the Cerebras Wafer Scale Engine at Hot Chips. The Los Altos, California company has 194 employees. 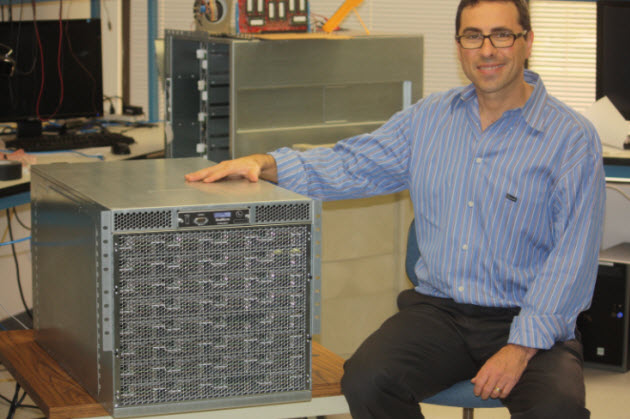 Above: Andrew Feldman with the original SeaMicro box.

Chip size is profoundly important in AI, as big chips process information more quickly, producing answers in less time. Reducing the time to insight, or “training time,” allows researchers to test more ideas, use more data, and solve new problems. Google, Facebook, OpenAI, Tencent, Baidu, and many others argue that the fundamental limitation of today’s AI is that it takes too long to train models. Reducing training time thus removes a major bottleneck to industrywide progress.

Of course, there’s a reason chip makers don’t typically build such large chips. On a single wafer, a few impurities typically occur during the manufacturing process. If one impurity can cause a failure in a chip, then a few impurities on a wafer would knock out a few chips. The actual manufacturing yield is just a percentage of the chips that actually work. If you have only one chip on a wafer, the chance it will have impurities is 100%, and the impurities would disable the chip. But Cerebras has designed its chip to be redundant, so one impurity won’t disable the whole chip.

“Designed from the ground up for AI work, the Cerebras WSE contains fundamental innovations that advance the state-of-the-art by solving decades-old technical challenges that limited chip size — such as cross-reticle connectivity, yield, power delivery, and packaging,” said Feldman, who cofounded Cerebras Systems and serves as CEO, in a statement. “Every architectural decision was made to optimize performance for AI work. The result is that the Cerebras WSE delivers, depending on workload, hundreds or thousands of times the performance of existing solutions at a tiny fraction of the power draw and space.”

“Cerebras has made a tremendous leap forward with its wafer-scale technology, implementing far more processing performance on a single piece of silicon than anyone thought possible,” said Linley Gwennap, principal analyst at the Linley Group, in a statement. “To accomplish this feat, the company has solved a set of vicious engineering challenges that have stymied the industry for decades, including implementing high-speed die-to-die communication, working around manufacturing defects, packaging such a large chip, and providing high-density power and cooling. By bringing together top engineers in a variety of disciplines, Cerebras created new technologies and delivered a product in just a few years, an impressive achievement.”

With 56.7 times more silicon area than the largest graphics processing unit, Cerebras WSE provides more cores to do calculations and more memory closer to the cores so the cores can operate efficiently. Because this vast array of cores and memory is on a single chip, all communication is kept on-silicon, which means its low-latency communication bandwidth is immense, so groups of cores can collaborate with maximum efficiency.

The 46,225 square millimeters of silicon in the Cerebras WSE house 400,000 AI-optimized, no-cache, no-overhead, compute cores and 18 gigabytes of local, distributed, superfast SRAM memory as the one and only level of the memory hierarchy. Memory bandwidth is 9 petabytes per second. The cores are linked together with a fine-grained, all-hardware, on-chip mesh-connected communication network that delivers an aggregate bandwidth of 100 petabits per second. More cores, more local memory, and a low-latency high-bandwidth fabric together create the optimal architecture for accelerating AI work.

“While AI is used in a general sense, no two data sets or AI tasks are the same. New AI workloads continue to emerge and the data sets continue to grow larger,” said Jim McGregor, principal analyst and founder at Tirias Research, in a statement. “As AI has evolved, so too have the silicon and platform solutions. The Cerebras WSE is an amazing engineering achievement in semiconductor and platform design that offers the compute, high-performance memory, and bandwidth of a supercomputer in a single wafer-scale solution.”

The Cerebras WSE’s record-breaking achievements would not have been possible without years of close collaboration with TSMC, the world’s largest semiconductor foundry, or contract manufacturer, and leader in advanced process technologies, the companies said. The WSE is manufactured by TSMC on its advanced 16nm process technology.

“We are very pleased with the result of our collaboration with Cerebras Systems in manufacturing the Cerebras Wafer Scale Engine, an industry milestone for wafer scale development,” said J.K. Wang, TSMC’s senior vice president of operations. “TSMC’s manufacturing excellence and rigorous attention to quality enable us to meet the stringent defect density requirements to support the unprecedented die size of Cerebras’ innovative design.” 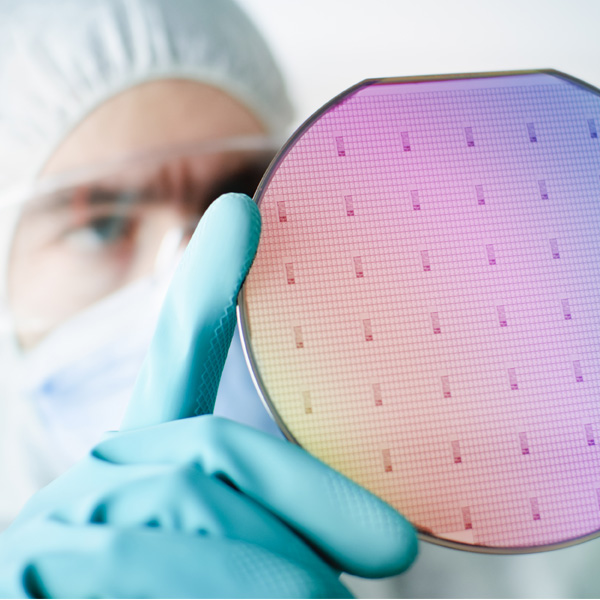 Above: An example of a silicon wafer, which is sliced into individual chips.

Because the Sparse Linear Algebra Cores are optimized for neural network compute primitives, they achieve industry-best utilization — often triple or quadruple that of a graphics processing unit. In addition, the WSE cores include Cerebras-invented sparsity harvesting technology to accelerate computational performance on sparse workloads (workloads that contain zeros) like deep learning.

Zeros are prevalent in deep learning calculations. Often, the majority of the elements in the vectors and matrices that are to be multiplied together are zero. And yet multiplying by zero is a waste of silicon, power, and time as no new information is made.

Because graphics processing units and tensor processing units are dense execution engines — engines designed to never encounter a zero — they multiply every element even when it is zero. When 50-98% of the data is zeros, as is often the case in deep learning, most of the multiplications are wasted. Imagine trying to run forward quickly when most of your steps don’t move you toward the finish line. As the Cerebras Sparse Linear Algebra Cores never multiply by zero, all zero data is filtered out and can be skipped in the hardware, allowing useful work to be done in its place.

Memory is a key component of every computer architecture. Memory closer to compute translates to faster calculation, lower latency, and better power efficiency for data movement. High-performance deep learning requires massive compute with frequent access to data. This requires close proximity between the compute cores and memory, which is not the case in graphics processing units where the vast majority of the memory is slow and far away (off-chip).

The Cerebras Wafer Scale Engine includes more cores, with more local memory, than any chip to date and has 18 Gigabytes of on-chip memory accessible by its core in one clock cycle. The collection of core-local memory aboard the WSE delivers an aggregate of 9 petabytes per second of memory bandwidth — 3,000 times more on-chip memory and 10,000 times more memory bandwidth than the leading graphics processing unit.

Swarm communication fabric, the interprocessor communication fabric used on the WSE, achieves breakthrough bandwidth and low latency at a fraction of the power draw of the traditional communication techniques. Swarm provides a low-latency, high-bandwidth, 2D mesh that links all 400,000 cores on the WSE with an aggregate 100 petabits per second of bandwidth. Swarm supports single-word active messages that can be handled by receiving cores without any software overhead.

Routing, reliable message delivery, and synchronization are handled in hardware. Messages automatically activate application handlers for every arriving message. Swarm provides a unique, optimized communication path for each neural network. Software configures the optimal communication path through the 400,000 cores to connect processors according to the structure of the particular user-defined neural network being run.

Typical messages traverse one hardware link with nanosecond latency. The aggregate bandwidth across a Cerebras WSE is 100 petabits per second. Communication software such as TCP/IP and MPI is not needed, so their performance penalties are avoided. The energy cost of communication in this architecture is well under 1 picojoule per bit, which is nearly two orders of magnitude lower than in graphics processing units. With a combination of massive bandwidth and exceptionally low latency, the Swarm communication fabric enables the Cerebras WSE to learn faster than any currently available solutions.