Smart calendar startup Clockwise today announced it has raised $18 million, with plans to grow its workforce and expand to other platforms, including Microsoft Office 365. The funding follows a six-month period during which signups grew 87%, according to a spokesperson, and coincides with the launch of a time management toolkit for remote workers called Clockwise for Teams.

The average employee is thought to waste up to 41% of work time on low-value tasks, and up to 53% of employees spend at least one hour every day dealing with distractions. Slack’s typical user sends 200 messages per day to colleagues, and the average worker spends around an hour of the workday reading news and 44 minutes interacting on social media.

A marquee feature of Clockwise’s calendar optimization platform is focus time, or a blocked-out chunk of two or more hours of uninterrupted individual work time. Clockwise automatically moves meetings to the least-interrupted time for all attendees, scheduling focus time on calendars so it’s protected.

According to Clockwise, focus time was informed by a study researchers conducted at the University of California, Irvine that found workers typically attend to a task for about three minutes before switching to something else. Another study showed the average employee only has 11 minutes between distributions, and a third found that office workers are interrupted about seven times an hour, or 56 times a day.

A growing body of research suggests this task-switching kills productivity because there’s a lag in returning to pre-interruption levels of efficiency, a phenomenon known as attention residue. One study pegged the amount of time it takes to refocus at 25 minutes, while another put it at 23 minutes. In either case, distractions are estimated to eat up as much as 40% of a person’s productive time.

Clockwise for Teams aims to minimize interruptions for pandemic-affected workers trapped at home. The company says from February to March it saw a 29% increase in team calendar syncs and a 24% increase in one-on-one meetings as managers tried to replicate in-office collaboration. Clockwise for Teams includes a team availability calendar that updates in real time and an analytics feature that shows every member’s focus and meeting times. It also automatically creates and protects a meeting-free day, angling to build in time to catch up on emails and projects.

Beyond penciling in focus time, both Clockwise Teams and the standard Clockwise reschedule conflicted meetings and reflect personal preferences in meeting times. Autopilot, Clockwise’s automation engine, optimizes meetings either on its own (once a day) or upon instruction, identifying those who tend to be scheduled at disruptive times and accounting for things like time zones and lunch. 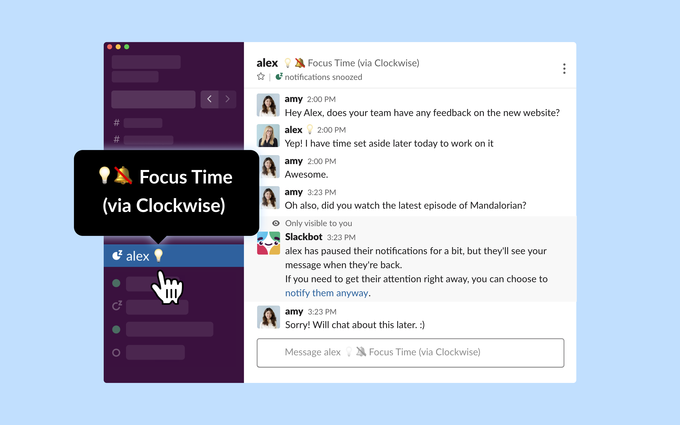 Clockwise doesn’t require installation (excepting a Chrome extension), and it works for both personal and enterprise G Suite accounts. It also integrates with Slack, syncing calendars to employee status — viewed as emojis — to indicate when coworkers are available.

Clockwise competes directly with Woven, which also taps AI to optimize workers’ calendars, as well as startups like ReclaimAI and SRI International-based Tempo. But Clockwise says it has seen adoption from teams at brands like Slack, Coursera, Lyft, Vimeo, Lattice, Spotify, and Twitter and has optimized over 200,000 calendars since 2019.