Open source conversational AI company Rasa has raised a $26 million round led by Andreessen Horowitz (a16z). According to a Rasa spokesperson, the funds will be used to further research, commercial and community software development, and developer education. As of 2019, an estimated 3.25 billion voice assistants were being used in devices around the world, and 72% of smart speaker owners use their devices as part of their daily routines.

Unfortunately for enterprises, many of those conversational assistants are “black box” affairs powered by proprietary, vendor-locked algorithms that can’t be tweaked, fine-tuned, or otherwise customized. That’s where San Francisco-based Rasa comes in.

Rasa offers three key products in its suite of conversational AI offerings. Rasa Open Source is a collection of software libraries targeting conversational AI, while Rasa X is a toolset designed to help developers improve and share AI assistants via websites, apps, smart devices, messaging platforms like Facebook Messenger and Slack, and custom channels. Rasa Enterprise is a premium product to orchestrate the development of contextual assistants at scale, whether in the cloud, on-premises, or against a third-party cloud provider. 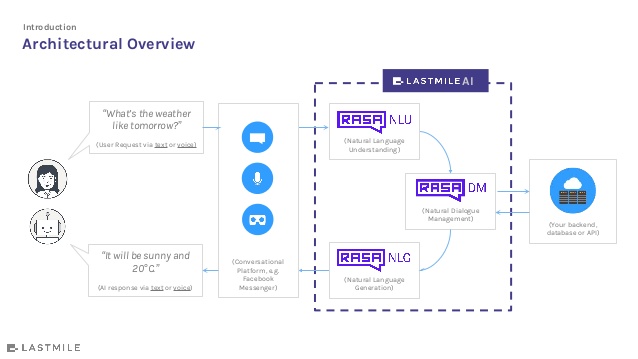 Using Rasa Open Source and Rasa X, developers can generate training data by talking to their assistants and providing feedback when errors are made. Developers are also able to filter, flag, and fix conversations to continually improve the experience in production and track, manage, roll out, or roll back the underlying models in real time. And they can take advantage of architectures like DIET that make it easier to build cutting-edge language models into chatbots.

Rasa Enterprise adds in analytics that surface metrics about how the assistant is being used and service agreements for implementation, migration, training, and project support. It also affords customers role-based development control with fine-grained, customizable permissions and multiple deployment environments for development, staging, and production with single sign-on for enhanced security. And it includes tools that can be used to ensure compliance with company security policies, HIPAA, GDPR, CCPA, and other regulations.

Rasa — whose open source project has been downloaded over 3 million times since launch and counts over 450 contributors — works with teams at Adobe, Deutsche Telekom, Lemonade, Airbus, Toyota, T-Mobile, BMW, and Orange. Utility company ENGIE says it used Rasa to streamline human resources processes, reducing the time it takes to recruit a candidate from six months to two. Swiss insurer Helvetica says its Rasa-powered solution achieved a policy conversion rate of over 30% via text message. A third client — European mobile bank N26 — claims to have automated handling of 20% of its customer service requests with Rasa.

In the past 14 months, the company says it has seen a 5 times uptick in software downloads, triple its community membership, and triple its annual recurring revenue. This growth comes amid fierce competition in the multibillion-dollar conversational AI market as the pandemic’s headwinds supercharge voice app usage. In November 2019, Sonos acquired open source and privacy-focused AI startup Snips. And according to a study by NPR and Edison Research, the percentage of voice-enabled device owners who use commands at least once a day rose between the beginning of 2020 and the start of April.

Andreessen Horowitz led this latest round with participation from its Cultural Leadership Fund, a strategic fund designed to bring Black cultural leaders to startups’ capitalization tables. As part of the round, Andreessen Horowitz’s Martin Casado will join Rasa’s board of directors. Existing investors Accel, 468 Capital, Basis Set Ventures, and Mango Capital also contributed, taking the company’s total raised to $40 million, following a $13 million series A round in April 2019.

“There is growing momentum in the areas of NLP research that power conversational AI,” said Rasa cofounder and CTO Alan Nichol, “and this funding allows us to build on that, developing the algorithms, infrastructure, and tooling to accelerate progress on the five levels of conversational AI.”