Online education giant Coursera has raised $103 million in a series E round of funding led by Seek Group, with participation from Future Fund and NEA.

A spokesperson confirmed to VentureBeat that the company is now valued at well over $1 billion, making Coursera the latest to join the unicorn brigade.

Founded in 2012, Coursera is one of a number of well-funded MOOCs — massive open online courses — to emerge. Coursera partners with universities and other educational institutions to deliver online courses to 40 million students, covering subjects like technology, business, science, and even autonomous cars.

Coursera also has specific product offerings for the corporate market, as well as for governments and nonprofits. 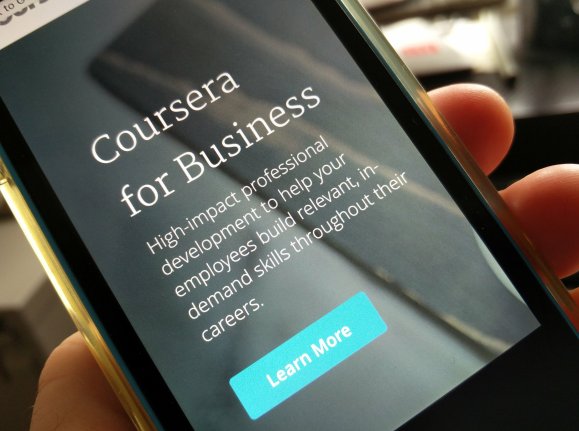 Above: Coursera for Business

Coursera had previously raised $210 million, including its $64 million series D two years ago. With its latest cash injection, it plans to grow its platform globally and further develop its offering in preparation for the “fourth industrial revolution” — often defined by developments across artificial intelligence (AI), robotics, quantum computing, and the internet of things (IoT), among other transformative technologies.

“The fourth industrial revolution, marked by advancements in automation and artificial intelligence, is dramatically reshaping our lives, businesses, and jobs,” noted Coursera CEO Jeff Maggioncalda. “Coursera is at the forefront of preparing individuals, companies, and governments to meet that challenge head-on and turn this disruption into opportunity. The additional funding gives us the resources and flexibility to further expand internationally and to accelerate the development of a learning platform that currently serves 40 million learners, 1,800 businesses, and over 150 top universities.”

Coursera was inspired by Koller and Ng’s experiences of developing online courses at Stanford in 2011. This was similar to another heavily funded MOOC, called Udacity, which was launched around the same time by Sebastian Thrun, the Stanford professor and computer scientist who set up Google’s “moonshot” program, Google X. In 2011, he somehow found the time to launch Udacity, which has gone on to raise $160 million.

The scalability of online courses — anyone can join lessons from anywhere in the world — and the much-discussed impending workforce crisis makes MOOCs appealing to investors. Moreover, while the global AI talent pool may be growing, demand still exceeds supply, according to a recent report from Element AI — people, including established computer scientists, will likely need to retrain to fill these roles.

It’s against this backdrop that online education platforms are expected to grow from a $4 billion industry today to a hefty $21 billion market by 2023.

“This investment reflects our commitment to online education, which is enabling the up-skilling and re-skilling of people and is aligned with our purpose of helping people live fulfilling working lives,” added Seek cofounder and CEO Andrew Bassat. “We have been watching Coursera for many years. They have a great team of people doing terrific work. We are pleased to come on board to partner with them in their next phase of growth.”