DJI, which was founded over a decade ago by Hong Kong University of Science and Technology enrollee Frank Wang,  is perhaps best known for drones like the Mavic Pro and Air, the Ronin S, the Matrice, and the Phantom 4. The Shenzhen, China-based company has an estimated 85% of the worldwide drone market, and while it prefers to keep shipment numbers close to the chest, DJI reportedly has more than $2 billion in sales across 100 countries and raised capital last year at a valuation of $15 billion.

While semiautonomous quadcopters remain DJI’s bread and butter, the company has dipped its toes into complementary segments, like gimbal-stabilized camcorders (Osmo) and virtual reality heads-up displays (Goggles). Now, in what appears to be a grab for an anticipated $1 billion market, DJI is launching its first-ever product built explicitly for education: the RoboMaster S1.

The RoboMaster S1 (or Step 1) is a ground-bound rover, unlike most members of the extended DJI family, and it features brushless motors that drive four Mecanum wheels (each with 12 rollers) attached to an omnidirectional chassis. A high-precision gimbal with an infrared Blaster launches nontoxic gel beads, and over 31 sensors help the S1 map and perceive the world. Sensors include six on its exterior casing and a first-person view (FPV) camera mounted on the top that livestreams footage to the companion RoboMaster app for smartphones. Under the hood, a system-on-chip and “industrial-grade” controller area network (CAN) bus cable handle processing and data transfer duties.

The S1 comes preloaded with interactive modes for play and competition. And for more sophisticated robotics enthusiasts who pick up an S1 when it goes on sale starting June 12, it fully supports programming languages such as Python and Scratch 3.0. Things like wheel torque and speed can be tuned and optimized by code alone, and made-from-scratch programs can be beamed wirelessly to the robot as custom skills.

Budding roboticists can tap preloaded computer vision and sound-detecting algorithms that recognize objects and respond in kind, or a wireless interconnectivity capability that allows the S1 to communicate with other units. Here’s what the S1 can do out of the box:

If trial-and-error isn’t a user’s style, DJI’s RoboMaster app offers Road to Mastery, a project-based course series intended to teach programming basics, and RoboAcademy, which comprises video tutorials and step-by-step guides. The company says new courses will be added to both catalogs “continually.”

“DJI is powered by passionate engineers with the continued desire to push the boundaries of technology,” said Wang, who serves as CEO. “Passion is vital, but so is the opportunity to learn and engage with technology at an early age.”

As for the aforementioned modes, all of which DJI says were inspired by its international RoboMaster Robotics Competition, there’s Target Practice and Target Race, where users are tasked with scanning preset markers as accurately as they can, and multiplayer battle modes, including Race and Free-for-All. In Race, users race their respective S1s to scan numbered markers in a right-to-left-sequence, and in Free-for-All mode they face off against each other using either gel beads or infrared beams. (DJI says the launcher’s rate and angle are automatically limited to ensure safety.) Both multiplayer modes have mystery defensive and offensive bonuses — Dizziness, Electromagnetic Interference, Extreme Speed, and Invincibility — to keep things interesting.

“We developed the RoboMaster S1 with the next generation of innovators in mind, making robotics and programming not just more accessible but also an entertaining and academic experience,” said Wang. 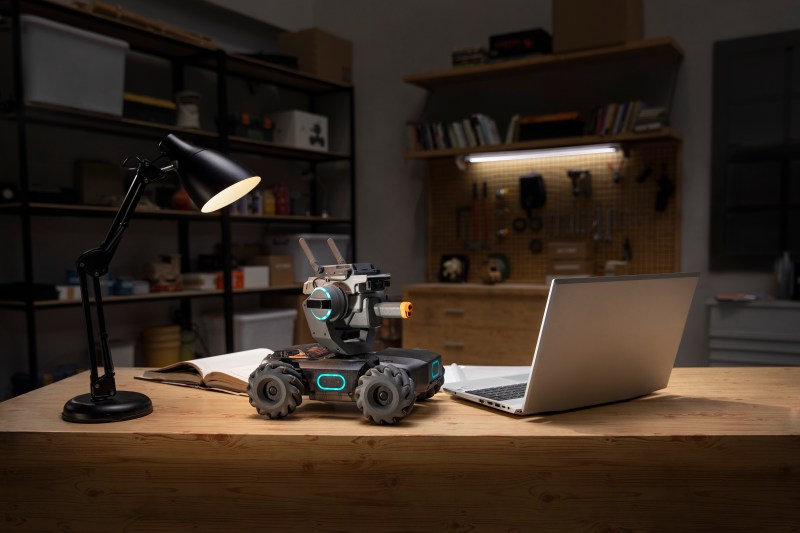 The RoboMaster S1 might seem like a considerable expense at $499 — before discounts for teachers and students (a kit with a dedicated controller, additional gel beads, an extra battery, and a gel bead container hits store shelves in July) — but it’s more or less in line with the competition. Sphero’s Bolt, a programmable app-enabled plastic ball that teaches coding, is available in a 15-pack starting at $1,950. Misty Robotics’ decidedly less beginner-friendly Misty II is expected to cost $2,399. And Lego Mindstorms EV3, which hasn’t been updated since 2013, has an MSRP of $349.

In that context, the S1 doesn’t seem like an unreasonable deal. Time will tell, of course, but assuming DJI commits to regularly upgrading the S1 with over-the-air enhancements, its lifespan could far exceed that of its airborne cousins.