Today the Denver, Colorado-based startup reemerged from its Skunkworks labs with Spark Bolt, an upgraded Sprk+ with a few new bells and whistles.

According to Adam Wilson, cofounder and chief architect, it’s something of a recommitment to education for Sphero. More than 20,000 schools have already incorporated the company’s products into their curriculums, he said.

“Over the past two years, we learned how to build a character,” Wilson told VentureBeat in a phone interview, “[and] there’s always been a programming aspect to our products. You don’t have to program if you don’t want to — we encourage you to play with the products — but there’s a deeper programming [component] to Bolt.”

Bolt boasts a UV-coated clear plastic shell that’s waterproof and “highly durable” and taps sensors — including a magnetometer, accelerometer, ambient light sensors, motor encoders, and gyroscope — to keep track of its speed, acceleration, and direction. A Bluetooth Smart chip pairs it to smartphones and tablets up to 100 feet away, allowing them to act as its controllers.

“We got a lot of feedback from educators,” Wilson said. “We put all of it together, along with what we thought would be the coolest thing to do.”

One recurring theme was battery life — teachers wanted a robot that would last all day, not just the length of two or three classes. So Sphero’s engineers stuffed Bolt with a power pack that lasts more than two hours on a charge, about double the battery life of Sprk+.

But Bolt’s highlight might be its display: an 8 x 8 multicolor LED matrix that animates in real time. It can be programmed to show pretty much anything, from games to cool designs that react to data from Bolt’s sensors. One preloaded demo — Snake — has users maneuver a line by tilting the Bolt in on its axes. 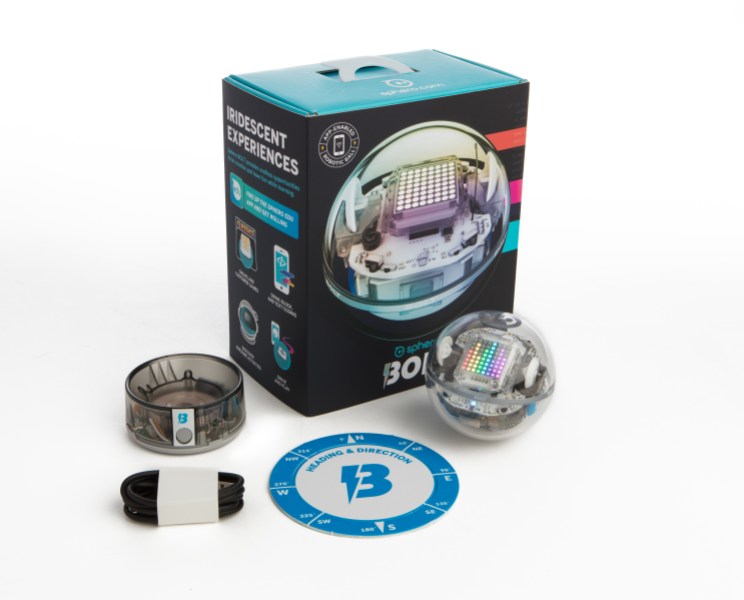 “It’s almost like a full-output display,” Wilson said. “It expands the amount of content you can make for Bolt … [like] colors and shapes and different display items.”

Another noteworthy improvement is a new infrared sensor that allows multiple Bolts to communicate with each other. It’s especially handy when used in tandem with the LED matrix, Wilson said — the Sphero team used it to program a real-life game of Pac-Man, for example, where one Bolt acts as a player character and four others stand in as ghosts.

Other hardware additions include an ambient light sensor that can read the brightness of a room and a magnetometer, which acts as a compass.

“[These sensors] let you build a real program with inputs and outputs … It’s a much deeper learning experience,” Wilson said.

Sphero’s app for education — Sphero Edu — has also been upgraded. On tablets, Macs, Chromebooks, and Windows machines with large displays, a toggle button lets users split the programming interface in two, with one side containing the Scratch visual programming language and the other its Java equivalent.

“Previously, you had to switch [between them] a lot,” Wilson said.

The Sphero Bolt costs $149 ($20 more than Sprk+) and comes with an inductive charging cradle, stickers, and a protractor with labeled cardinal directions. It’s also available in a 15-pack for educators that starts at $1,950. On the accessories front, there’s a new airline-compliant Power Pack carrying case that stores up to 15 units and comes loaded with maze tape and other peripherals.

As for what comes next for Sphero, Wilson declined to spill the beans but said that new branded toys aren’t in the immediate pipeline.

“We most likely won’t be doing [licensed] products [in the near future],” Wilson said, “[unless] the right thing comes around.”