The pandemic has opened a Pandora’s box of consumer concerns, with flights canceled, gyms closed, and monthly membership commitments to contend with. For DoNotPay, a company that has created dozens of bots to help consumers fight for their rights, the crisis has meant increased demand. “We were doing well before, but since the crisis began it has been one thing after another that has really grown our business,” explained DoNotPay founder and CEO Josh Browder.

Browder is the British-born entrepreneur behind a “robot lawyer” better known for helping consumers fight parking fines. Now based in San Francisco, Browder’s business has gone from strength to strength since he launched his first website back in 2015 to help Londoners appeal parking tickets. Relying on rules-based automation, Browder created an algorithm that uses historically successful appeals as a template to automatically generate fresh appeals for new applicants — taking the spadework out of fighting the system. Today, DoNotPay is a multi-purpose platform that sides with consumers who want to cancel memberships and subscriptions, fight corporations, sue robocallers, file for benefits, claim compensation, and more.

With the physical world grinding to a halt over the past few months, Browder told VentureBeat requests have grown 50% month-on-month and certain categories are going through the roof.

“People have been desperate to get refunds from airlines; gyms have been shutting down and people are wanting to cancel,” Browder said. “Certain dispute categories, such as canceling gym memberships, have gone up by almost 30 times.”

To capitalize on this growth, DoNotPay today announced it has raised $12 million — at an $80 million valuation — in a series A round of funding led by existing investor Coatue Management, the New York-based investment firm behind a number of notable startups, including Uber, Lyft, Box, and Snap. Participants in the round include Andreessen Horowitz, Peter Thiel’s Founders Fund, and Felicis Ventures, all existing investors, and Day One Ventures. This round takes DoNotPay’s total funding to more than $16 million.

According to Browder, one of the advantages of having Coatue and Andreessen Horowitz on board is that they are particularly good at helping startups recruit the right people — which is what DoNotPay will use the lion’s share of its fresh funding for. The company currently has eight employees, all but one an engineer, and is now looking to triple its headcount, still with a focus on technical talent.

“We’re hiring more engineers, and everyone is just going to be churning out new legal bots,” Browder said. “We see it very mathematically — one engineer can churn out X number of bots. We have a list of 50 new products that we want to build, we just want to keep churning them out.” 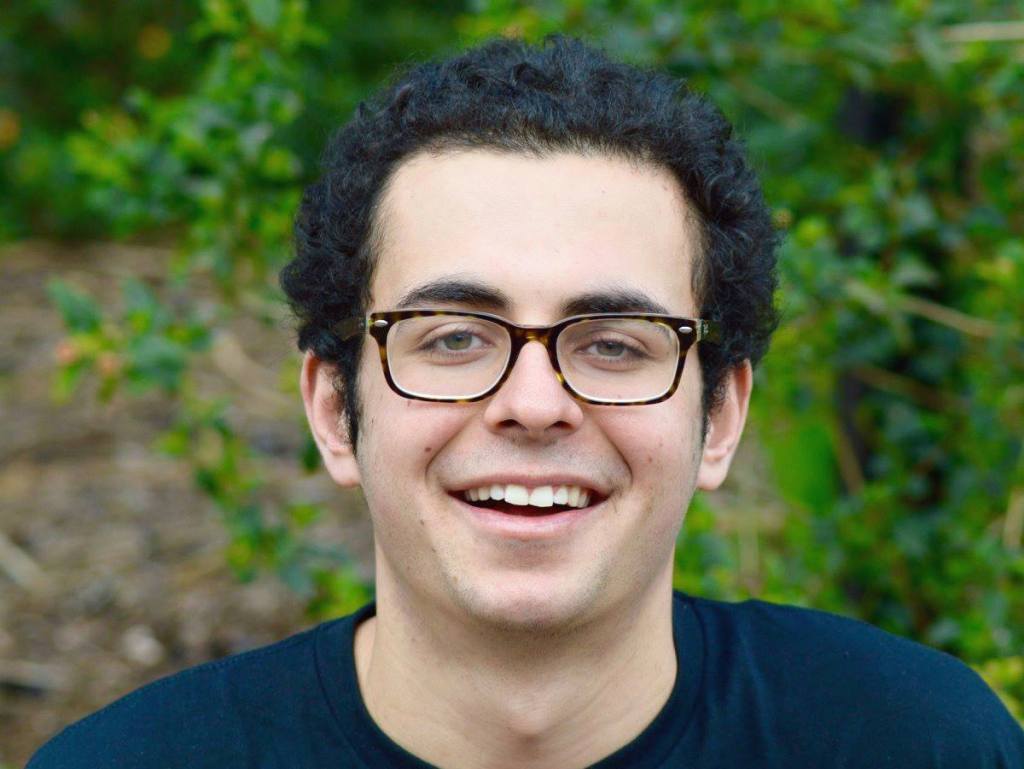 “Churning” out new products may sound a little blasé, but it says a lot about the scale of opportunity. Bureaucracy and corporate chicanery are rife across society, and Browder wants to tackle it all. “Large corporations have teams of lawyers, so we want to get the consumer someone to fight back, and for that we eventually have to do everything,” he said.

In the five years since launch, DoNotPay has brought to market more than 100 individual bots, which can be grouped into six categories:

While it is open to tackling just about any legal or bureaucratic process, the company operates within certain boundaries. First up, a problem has to be mostly solvable online, rather than requiring in-court presence — though as noted, it can help prepare a script for a user to read in a small-claims court. More importantly, it has to impact a large number of people to warrant building a robot representative.

“A problem has to affect more than 25 million people,” Browder said. “We want to do things that really impact everyone, and everyone has been delayed by a flight, everyone wants to cancel their gym membership — we only do the most mass-market problems. Beyond that, we can only do things that can be fully automated. So a robot lawyer is never going to help you get divorced, because you have to go into court and argue and robots can’t argue in court.”

While much of DoNotPay’s engine is essentially rules-based, the company does use some machine learning in the form of natural language processing (NLP), powered by IBM’s Watson. For example, DoNotPay has a Terms of Service (ToS) scanner people can use to spot undesirable clauses in the fine print. Users simply upload a ToS document to DoNotPay and a bot will peruse the text and flag anything that seems untoward, such as a forced arbitration clause that prevents a user from suing a company in court. 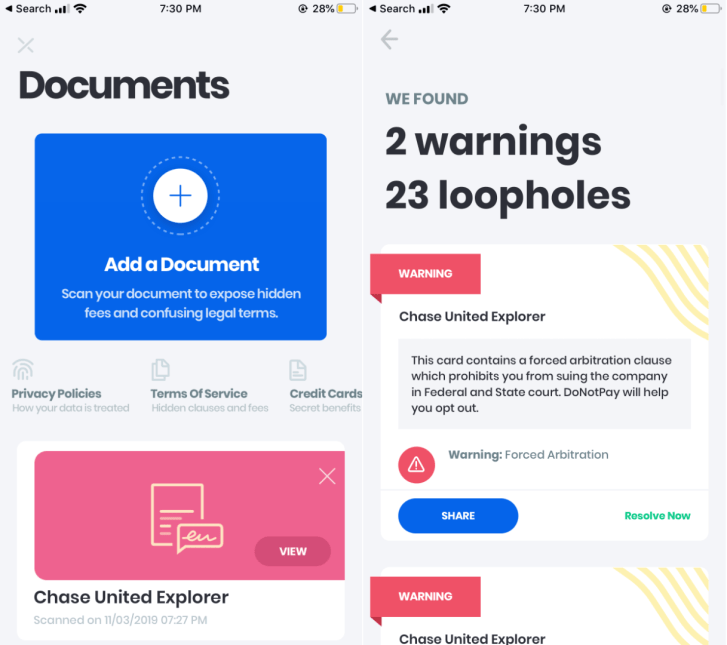 The parking dispute bot can also interpret explanations input by the user, such as “I did pay for parking,” when creating the legal defense. 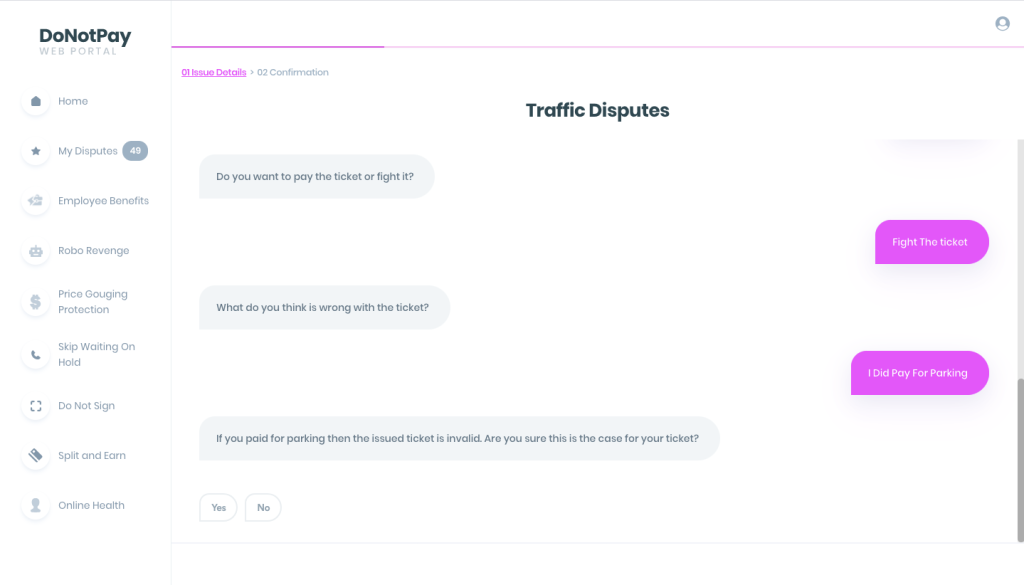 Browder says rules-based automation is a good match for the systems DoNotPay is trying to tackle.

“I like to think of the law as society’s operating system,” Browder said. “It is just a bunch of rules at the end of the day — [DoNotPay] goes down a decision tree to match you to a legal defense, takes down a few details, and then uses all of that to generate a document, which it then sends automatically to the government or these large companies.”

Apple popularized and trademarked the phrase “There’s an app for that” in the wake of the app store boom it helped create more than a decade ago. But mobile lawyer, small-print scrutinizer, and red-tape slicer is a fairly unique app category, one DoNotPay has advanced almost single-handedly over the past five years. This leadership — and its target market — are attractive to investors.

That’s the sentiment expressed by Niki Pezeshki, a partner at Felicis Ventures, which has invested in both of DoNotPay’s funding rounds. “DoNotPay is truly a mission-driven company that is committed to expanding legal rights for underserved communities,” he said. “People have apps to do almost anything, but consumer rights is one of the last few untapped opportunities.”

DoNotPay isn’t yet profitable, but it isn’t hemorrhaging vast amounts of cash as its Silicon Valley counterparts have often done in their early years. Browder said his company is now at the “break-even” point, funded entirely by a $3 a month user subscription. Browder plans to remain on this path, with a firm commitment to retaining users’ trust.

“We always plan to have a direct relationship with our customers and can commit to never selling data or ads,” he said. “We plan to be the Costco of consumer rights, making money only on our subscription.”

DoNotPay did manage to generate a minor bit of controversy a few months back when it launched a new Chrome extension that enabled people to share online subscriptions without divulging their password. Google pulled the extension just days after launch, apparently because DoNotPay had used screenshots from Disney to promote the extension. As COVID-19 began impacting people’s lives, DoNotPay was forced into other directions, such as building a bot that helps U.S. users file unemployment claims.

The company is also working on a broader Chrome extension that encapsulates its whole product, so it is going to wait until the product is ready before launching it again. The new Chrome extension sounds like a compelling proposition — Browder says it will work proactively for users in the background and will be able to automatically request compensation from an airline if the Wi-Fi on a flight doesn’t work, for example. The company’s latest cash injection will help facilitate this function, alongside a bunch of other new products designed to help consumers fight the system.

“Our next focus will be helping people clean their criminal records and lower their property tax bills,” Browder said.

For now, DoNotPay is limited to the U.S and U.K., but it’s currently being tested in Australia and Canada, with other markets potentially on its radar. “I think DoNotPay can work anywhere where there’s a rule of law,” Browder added.