Despite massive growth in no-code, only 18% of people are familiar with “no-code,” according to the Rise of the No-Code Economy report produced by Formstack, a no-code workplace productivity platform. 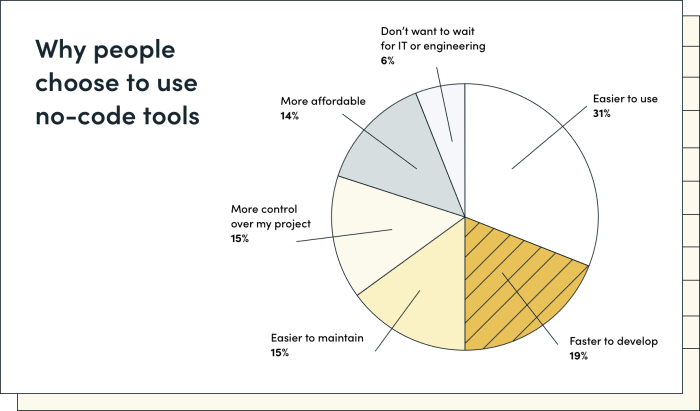 Above: People use no-code tools because they make it easier and faster to develop applications.

If you haven’t yet heard of no-code, you’re not alone. Despite the massive growth in no-code over the last year, 82% of people are unfamiliar with the term “no-code.” That’s according to the recent report produced by Formstack, a no-code workplace productivity platform. Yet, the survey also found that 66% of respondents have adopted no-code tools in the last year, and 41% in the last six months—suggesting developer shortages and the pandemic have driven growth across the industry.

No-code is a type of software development that allows anyone to create digital applications—from building mobile, voice, or ecommerce apps and websites to automating any number of tasks or processes—without writing a single line of code. It involves using tools with an intuitive, drag-and-drop interface to create a unique solution to a problem. Alternatively, low-code minimizes the amount of hand-coding needed, yet it still requires technical skills and some knowledge of code.

The report showed that no-code adoption and awareness is still relatively limited to the developer and tech community, as 81% of those who work in IT are familiar with the idea of no-code tools. But despite current adoption rates among those outside of IT, the report shows huge potential for non-technical employees to adopt no-code. Formstack’s survey found that 33% of respondents across industries expect to increase no-code usage over the next year, with 45% in computer & electronics manufacturing, 46% in banking and finance, and 71% in software.

In addition to growing adoption rates, many respondents believe their organizations and industries will begin hiring for no-code roles within the next year, signaling that the growing no-code economy will create demand in an entirely new industry segment.

The survey polled 1,000 workers across various industries, job levels, and company sizes to gather comprehensive data on the understanding, usage, and growth of no-code. External sources and data points are included throughout the report to further define and explain the no-code economy.