In October 2018, during a press event in New York City, Google took the wraps off the latest additions to its three-year-old Pixel smartphone lineup: Pixel 3 and Pixel 3 XL, successors to 2017’s Pixel 2 and Pixel 2 XL, respectively. Both boast dual front cameras and a Google-designed Pixel Visual Core image coprocessor, and that’s just for starters. But Google didn’t exactly go gangbusters.

During Google parent company Alphabet’s most recent quarterly earnings call, Google CEO Sundar Pichai revealed that sales had fallen short of projections. He cited competitive pressure in the premium market as one of the root causes, coinciding with an industry-wide decline in smartphone sales.

Perhaps that’s why today at its annual I/O developer conference, Google debuted two new midrange, affordable Pixel phones to complement its flagship offerings: the Pixel 3a and Pixel 3a XL. They pack slightly less powerful chips than their counterparts, but they’re nearly identical in most other respects. And more importantly, they’re priced much more attractively.

You’ll note that the Pixel 3a and Pixel 3a XL take after their predecessors in the design department. In fact, it’s difficult to tell them apart at a distance, and that’s no doubt intentional.

Size is the obvious differentiator between the Pixel 3a and Pixel 3a XL. The former measures 151.3 x 70.1 x 8.2 millimeters, weighs in at 147 grams, and spans 5.6 inches diagonally, while the latter tops out at 6 inches diagonally. They both sport OLED screens, albeit with slightly different resolutions — the Pixel 3a’s packs 2,220 x 1,080 (440 dots per inch) pixels compared with the Pixel 3a XL’s 2,160 x 1,080 (400 dots per inch) — and they have in common two-toned covers with scratch-resistant polycarbonate shielding.

This plastic — which stands in for the Pixel 3 and Pixel 3 XL’s glass — houses the handsets’ single Sony IMX 12.2-megapixel camera, the same found in the Pixel 3 and Pixel 3 XL. Alongside it is an LED flash and a custom-designed fingerprint sensor — Pixel Imprint — which Google says becomes faster and more accurate over time as it learns your fingertips’ unique grooves. 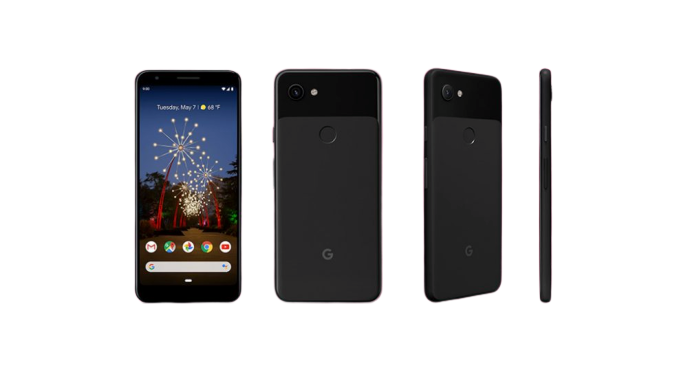 Above: The Pixel 3a in black.

On the front, near the top, a proximity sensor and ambient light sensor abut a single 8.1-megapixel front-facing camera. (Google opted to do away with the Pixel 3’s and Pixel 3 XL’s secondary shooter, likely to cut costs.) The camera is joined by earpieces that produce stereo sound in conjunction with a second front-firing speaker.

Rounding out the Pixel 3a’s and Pixel 3a XL’s accoutrements are a power button and volume rocker on the left-hand side, a USB Type-C port on the bottom, and circular cutouts around the phones’ frames for noise-canceling microphones.

The Pixel 3a and Pixel 3a XL inherit the Pixel 3’s and Pixel 3 XL’s rear camera, which is widely considered to be among the best on the market. It’s impressive in its own right, with a 1.14μm pixel sensor size, an f/1.8 aperture, a 76-degree field of view, autofocus with dual phase detection, a spectral sensor to aid in color accuracy, a flicker sensor to reduce banding in low light, and optical image stabilization. But software drives the camera’s most impressive features.

Take Top Shot, for instance. It captures a burst frame before and after the shutter button is tapped and uses on-device AI to pick the best frame, taking into account things like smiles, open eyes, and gazes.

Photobooth similarly taps machine learning to capture the “best” of scenes, like when people smile, stick out their tongues, make a face, wink, or kiss. Night Sight, meanwhile, boosts the brightness of ultra-dark images using — you guessed it — AI algorithms, which additionally restore color and sharpness. 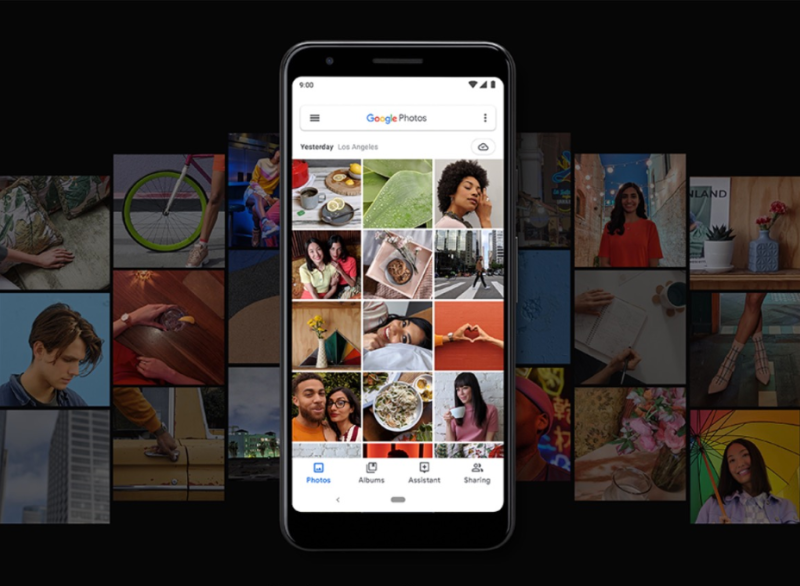 Super Res Zoom improves the quality of zoomed-in pics by combining multiple short exposures for increased sharpness. (Google says the results are roughly equivalent to photos taken using a 2 times optical zoom lens.) Motion Tracking Autofocus locks onto objects in-scene and adjusts the exposure and focus to maintain a baseline level of sharpness. And Motion Photos records a brief video in addition to the photo at shoot time.

Google’s outstanding HDR+ mode is present and accounted for — capturing a series of photographs at varying exposures and generating a composite image to ensure that details and highlights aren’t lost during post-processing. So, too, is portrait mode, which produces bokeh (selective blur) by generating a segmentation mask and depth map that’s used to differentiate the foreground from the background.

Also worth highlighting is Google Lens, which works in real time on the Pixel 3a and Pixel 3a XL. The growing list of things it can detect in-frame includes furniture, clothing, books, movies, music albums, video games, landmarks, points of interest, notable buildings, Wi-Fi network names and passwords, beverages, celebrities, home decor items, and more. Perhaps most useful of all, it can automatically extract phone numbers, dates, and addresses from business cards and add them to your contacts list. 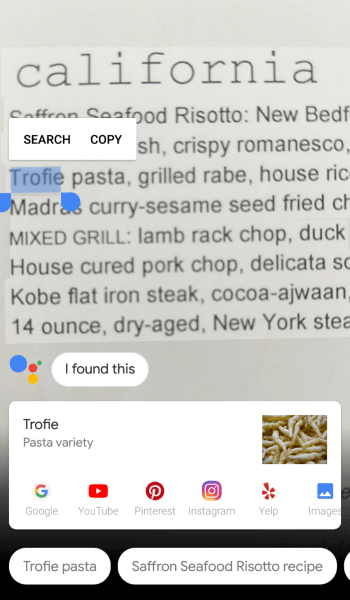 As for the Pixel 3a’s and Pixel 3a XL’s 8-megapixel, f/1.8 aperture, 1.12μm pixel size front-facing camera, it lacks the Pixel 3’s and Pixel 3 XL’s wide-angle selfie mode — an 84-degree field of view and the absent secondary ultra-wide camera is to blame, it would seem. But it has a face-retouching feature that lets you apply skin-smoothing filters like Natural and Soft, along with the same category-leading portrait mode.

The Pixel 3a and Pixel 3a XL might not pack top-of-the-line chipsets under the hood, but they’re still plenty capable.

Qualcomm’s 10-nanometer, 64-bit Snapdragon 670 features a two-core chip (the Kryo 360) clocked at 2GHz and paired with six low-power, energy-efficiency cores (based on ARM’s Cortex A75 and A55 designs) that clock up to 1.7GHz.

The graphics card on tap is the Adreno 616, which can drive displays exceeding 1080p. Together with the CPU and Hexagon DSP, the GPU comprises Qualcomm’s AI Engine, which accelerates machine learning workloads from frameworks like Facebook’s Caffe and Caffe2, Google’s TensorFlow and TensorFlow Lite, the Open Neural Network Exchange (ONNX), and Qualcomm’s own Neural Processing SDK and Hexagon Neural Network (NN).

As for the rest of the Snapdragon 670’s components, there’s Qualcomm’s X12 LTE modem, which delivers uplink speeds up to 150Mbps and downlink speeds of around 600Mbps, and the Spectra 250 image signal processor (ISP), which captures videos up to 4K at 30fps. 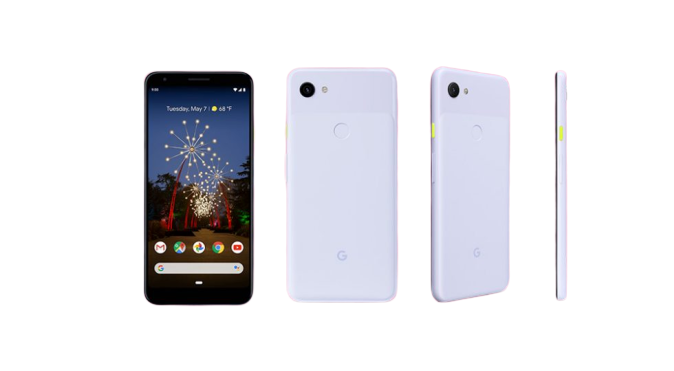 Above: The Pixel 3a in purple

Supplying power to those chips is a 3,000mAh battery in the Pixel 3a, which clocks in at about 100mAh over the Pixel 3’s power pack (2,915mAh). As for the Pixel 3a XL’s battery, it’s 3,700mAh — up from the Pixel 3 XL’s 3,520mAh — but that (along with the Pixel 3a’s battery) sadly isn’t compatible with wireless Qi charging accessories like Google’s Pixel Stand. Both support fast charging up to 18W via (USB-PD 2.0), which delivers an estimated 7 hours of use in as little as 15 minutes.

The Pixel 3a and Pixel 3a XL have 4GB of LPDDR4X RAM (the same capacity as the Pixel 3 and Pixel 3 XL) but they lack the Pixel Visual Core (PVC), a Google-designed coprocessor that can crunch trillions of operations per second while consuming less power than a traditional processor.

On the storage front, the Pixel 3a and Pixel 3a XL make do with 64GB. An 802.11 a/b/g/n/ac 2×2 MIMO chip supplies Wi-Fi connectivity, and a bevy of sensors — including an accelerometer, gyrometer, magnetometer, and barometer — orient the phones in three-dimensional space. There’s NFC onboard for contactless payment functionality (via Google Pay or the platform of your choice); Bluetooth 5.0 Low Energy for accessories pairing; and GPS and GLONASS for granular positioning. 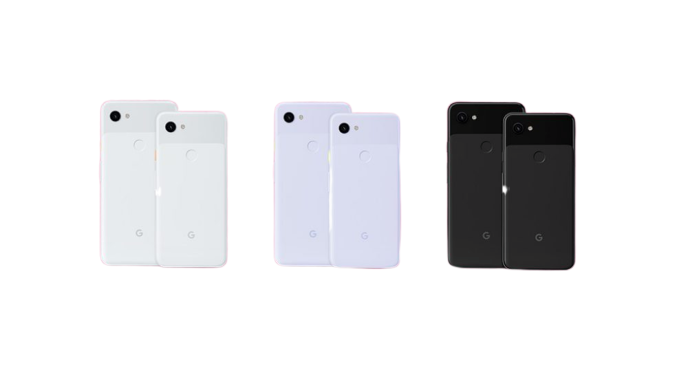 Also worth noting: The Pixel 3a and Pixel 3a XL have an eSIM (Embedded SIM). As with their predecessors, the phones can be provisioned to a network without the need to swap a physical SIM. Network profiles are downloaded automatically via Google’s eSIM Manager app on the Play Store.

The Pixel 3 and Pixel 3 XL ship running Android 9.0 Pie, the latest version of Google’s Android operating system. In addition to Google Assistant, Google’s intelligent assistant that can summon an Uber and control more smart home devices from hundreds of brands, the Pixel 3a and Pixel 3a XL ship with exclusive features that aren’t available on most other Android phones.

One is Call Screen, which transcribes phone calls in real time so that you can decide whether or not to pick up. A second is Google Duplex, Google’s AI chat agent that books restaurants via Google Assistant in 43 U.S. states. Yet another is Now Playing, which uses on-device machine learning to listen for “millions” of songs in the background and surface metadata on the phone’s lock screen when it finds a match. 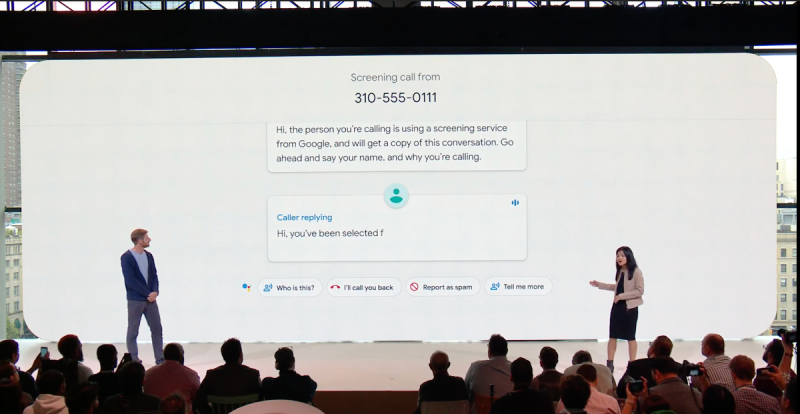 Plus, the Pixel 3a and Pixel 3a XL come with unlimited uncompressed photo and video storage in Google Photos. (Normally, free-tier users have to contend with a 15GB file cap across Photos, Gmail, and Google Drive.) Perhaps best of all, both handsets are guaranteed at least three years of software updates.

In the U.S., the Pixel 3a and Pixel 3a XL are available from Verizon, T-Mobile, and Sprint and are compatible with all major networks. Of course, you’ll be able to pick one up unlocked if you so choose through the Google Store, Best Buy, Amazon, and other major brick-and-mortar retailers, plus Google’s Project Fi.

Both go on sale this week in 13 markets (Australia, Canada, Germany, Italy, Spain, the U.S., India, Japan, Taiwan, France, Ireland, Singapore, and the U.K.) starting at $399 and $479 for the Pixel 3a and Pixel 3a XL, respectively. They come in three colors — Clearly White, Purple-ish, and Just Black — and ship with a Quick Switch Adapter (USB-A to USB-C) to transfer messages, contacts, and photos from old Android or iOS devices.