Nailing the right tone and tenor is of critical importance where writing’s concerned, whether the audiences of said writing are friends, coworkers, or hiring managers. The trouble is, without an extra pair of eyes, it’s rarely easy to know whether your work will have the intended effect.

Fortunately, Grammarly, a developer of cloud-hosted online grammar checking and plagiarism detection tools, has developed a tone detector the company claims can identify subtle contextual clues conveying a range of tempers. Essentially, it taps a battery of hard-coded rules and machine learning algorithms to spot signals in a piece contributing to its tone, including word choice, phrasing, punctuation, and even capitalization.

It’ll no doubt be of use to the 25% of respondents in a recent Grammarly survey who reported receiving feedback that their work email tone is too harsh. In that same study, 17% of young professionals under the age of 35 claimed they’d been told that their tone is too informal.

“Accurately identifying someone’s tone in writing is much harder than it is in conversation. For one thing, you have no facial expressions or body language to hint at a writer’s emotional state. For another, there’s usually no single attribute that is responsible for the tone of a message,” wrote Grammarly in a blog post. “In the future, you can expect Grammarly to not only help you identify the tone of your message but also offer specific suggestions for achieving the tone you want.”

To this end, tone detector, which is available in beta as part of Grammarly’s browser extension for Chrome ahead of a rollout on Safari and Firefox in the coming weeks, attempts to suss out the sentiment of any email, document, or blog post at least 120 characters in length. Recognized tones include “friendly,” “joyful,” “aggressive,” “annoyed,” and “excited,” among 35 others.

The new feature follows on the heels of a revamped interface that made it easier to keep tabs on consistent capitalization, spelling, acronyms, and more. Prior to that, Grammarly brought its AI-powered proofreading tools to Google Docs. 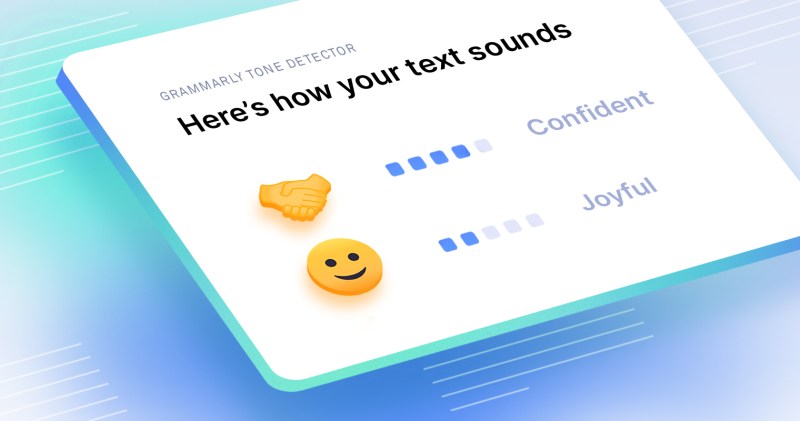 Grammarly — the brainchild of Kiev, Ukraine-based developers Alex Shevchenko, Max Lytvyn, and Dmytro Lider — was founded in 2009 shortly after the sale of Lytvyn and Shevchenko’s first startup, MyDropBox, to educational services company Blackboard. In May 2017, Grammarly raised $110 million from General Catalyst, IVP, and Spark Capital in its first venture round, and it has since grown to over 200 employees across offices in Kiev, San Francisco, and New York.

In addition to Google Docs, Office, and other platforms, Grammarly’s spell-checking tools are available on smartphones in Grammarly Keyboard, a keyboard replacement for iOS and Android that scans text messages, documents, and emails for errors in four English dialects: American, British, Canadian, and Australian.

Grammarly says its services are used by nearly 20 million people across all platforms. Its entry-level paid service, Grammarly Premium, costs $30 a month (or $140 a year), while its enterprise-oriented Grammarly Business tier is $15 per user per month. Both add style and vocabulary recommendations across all platforms.