The world is moving into cities. For the first time in history, the majority of humanity lives in cities, according to United Nations data. In the decades ahead, as more of the global population moves into cities, congestion could get worse, but advances in technology that can help make public transportation a more predictable or enjoyable experience can lower carbon emissions and have a positive impact on climate change.

Using a combination of time, distance traveled, and individual events as data sets, the AI makes it possible for Google to provide predictions without a need to rely on bus schedules provided by public transportation agencies.

Details of how Google Maps uses machine learning to forecast how many minutes away your bus is more accurately than bus schedules was spelled out today by Google research scientist Alex Fabrikant. 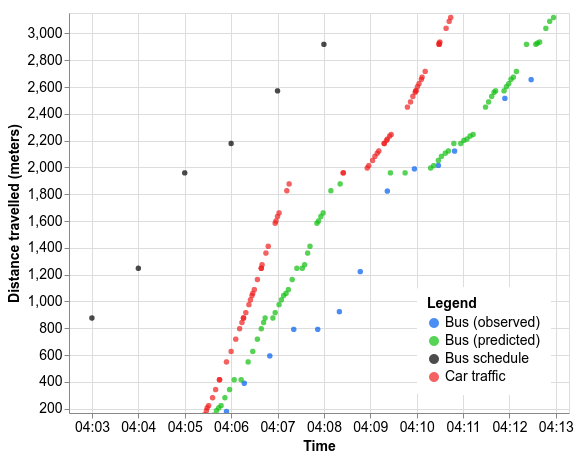 The model creation process begins by gathering bus location data from public transportation agencies for training data, then aligning that to car speeds on the route. The sequence model then accounts for each anticipated stop or reduction in speed, such as the time and distance a bus needs to slow down and pull over at a bus stop.

“Each unit predicts its duration independently, and the final output is the sum of the per-unit forecasts. Unlike many sequence models, our model does not need to learn to combine unit outputs, nor to pass state through the unit sequence,” Fabrikant said in a blog post.

Factors like location, day of the week, and time of day are also considered.

“To capture unique properties of specific streets, neighborhoods, and cities, we let the model learn a hierarchy of representations for areas of different size, with a timeline unit’s geography (the precise location of a road or a stop) represented in the model by the sum of the embeddings of its location at various scales,” Fabrikant said.

Google today also rolled out a feature to predict how crowded a bus or train will be using machine learning in 200 cities globally.

A number of features have been introduced in the past year to make life easier for travelers on public transportation, with the introduction of bus stop-by-bus stop directions last year and in recent months, on-screen augmented reality directions, as well as Google Assistant voice commands to tell you when the next bus is coming for New York City residents and Google Pay support for bus and train tickets.

A Wall Street Journal report published last week concluded that there are millions of fake listings on Google Maps, a fact Google acknowledged and said it is attempting to address. More than 3 million fake business profiles were removed from Google Maps in 2018, the company said in a blog post in the wake of the news.