IBM says it has made progress toward developing ways to estimate the severity of Parkinson’s symptoms by analyzing physical activity as motor impairment increases. In a paper published in the journal Nature Scientific Reports, scientists at IBM Research, Pfizer, the Spivack Center for Clinical and Translational Neuroscience, and Tufts created statistical representations of patients’ movement that could be evaluated using AI either in-clinic or from a more natural setting, such as a patient’s home. And at the 2020 Machine Learning for Healthcare Conference (MLHC), IBM and the Michael J. Fox Foundation intend to detail a disease progression model that pinpoints how far a person’s Parkinson’s has advanced.

The human motor system relies on a series of discrete movements, like arm swinging while walking, running, or jogging, to perform tasks. These movements and the transitions linking them create patterns of activity that can be measured and analyzed for signs of Parkinson’s, a disease that’s anticipated to affect nearly 1 million people in the U.S. this year alone. Physical measurements taken from Parkinson’s patients deviate from those found in non-patients, and growth in those deviations marks disease progression over time.

Leveraging this, in the Nature Scientific Reports study, the coauthors developed an unsupervised AI technique that generates measurements of movement quality. (Unsupervised learning is a type of machine learning that looks for previously undetected patterns in a data set with no pre-existing labels and a minimum of human supervision.) They transformed continuous signals from wearables into a sequence of “syllables” common across healthy subjects that became a part of a learned motor repertoire, with subsequences shared across different actions. The derived statistical distribution of transitions between syllables was a signature of healthy behavior; disorganized sequences of symbols were observed in Parkinsonian patients. 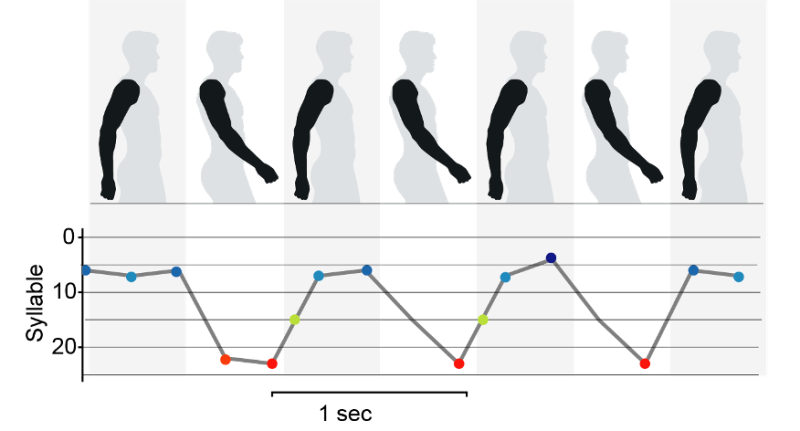 Above: Arm swinging during walking can be converted to a sequence of discrete movements recorded at the wrist.

The researchers’ technique enabled them to estimate the gait impairment and severity of Parkinson’s symptoms by capturing increasingly disorganized transitions between movements. Over the course of several experiments, it was applied to data in previous studies collected from people (1) diagnosed with Parkinson’s undergoing a standard neurological exam, (2) healthy participants undergoing the same procedure, and (3) people with Parkinson’s in unconstrained behavior at home.

The unsupervised approach proved highly efficient, requiring data from less than 10 minutes of activity on average to create stable estimates. Perhaps more importantly, the researchers assert that if it were deployed into production, it would allow 24/7 evaluation of a person’s neurological state and comparison of evaluations both in clinical settings and at home. That’s in contrast with existing Parkinson’s diagnostics like the Movement Disorder Society’s Unified Parkinson’s Disease Rating Scale, which typically are measured only a few times a year, are subjective in nature, and rely largely on patient self-reporting

“At a time when there is increasing interest in expanding telemedicine capabilities to enable patients especially vulnerable to COVID-19 to remain at home, our research demonstrates how a neurologist could accurately evaluate Parkinson’s patients remotely,” IBM research staff member Vittorio Caggiano and staff research engineer Avner Abrami wrote in a blog post describing the study. “The added benefit to such a scenario is that telemedicine checkups could be performed more frequently than is possible when patients are required to visit a doctor’s office.”

IBM’s Nature Scientific Reports paper was part of the company’s Bluesky Project with Pfizer, which launched in 2016 with the goal of developing a system to improve clinical trials conducted for Parkinson’s drugs in development. IBM’s role has been developing algorithms that enable systems to analyze data collected from study participants.

In a complementary study scheduled to be presented at MLHC, IBM and the Michael J. Fox Foundation researchers built a family of algorithms that take into account factors that can mask the outward appearance of a person’s Parkinson’s, such as medications that can alleviate tremors and improve control. IBM notes in a forthcoming blog post that because the underlying biology of Parkinson’s is not yet fully understood, it’s often difficult for physicians to understand how far the disease has advanced solely by judging outward symptoms.

The researchers’ approach builds on a probabilistic framework called a hidden Markov model and uses variational inference to learn personalized effects. After learning the model, insights can be derived from interpreting the model’s variables to learn more about the disease and from analyzing predictions for a particular cohort of patients.

Although the work was motivated by Parkinson’s disease, the researchers hope it might inspire similar exploration in other conditions such as diabetes, Alzheimer’s disease, and amyotrophic lateral sclerosis (ALS). In future work, they plan to focus on insights they’ve uncovered by applying models to data collected by the Parkinson’s Progression Markers Initiative, the Michael J Fox Foundation’s ongoing observational Parkinson’s study.

IBM and the Michael J. Fox Foundation first began collaborating on Parkinson’s research in 2019 with the goal of trying to better understand Parkinson’s and the route it can take in patients. The organizations have published studies about experiments with AI to analyze language comprehension changes that might distinguish Parkinsonian patients from healthy people, as well as efforts to build machine learning algorithms that can detect and analyze fluctuations in patient speech on a long-term basis. IBM also developed a fingernail sensor prototype designed to track, monitor, and diagnose movement and neurodegenerative disorders with the help of AI.

“Despite progress on many fronts in the management of chronic diseases, there are still many open questions in the field. A better understanding of chronic disease could enable improved patient care management, and faster, more efficient drug development as a result of better designed clinical trials,” IBM wrote in an upcoming blog post.