London-based Karakuri is a product of Founders Factory, an incubator that matches investors with startups and helps with product validation, market insights, distribution, and more.

Karakuri currently has two robots — one of which is the DK-One, pitched as a “high throughput” machine that can be customized and used for personalizing meals, managing portion control, and dispensing food on a mass scale. Millions of people follow some form of restricted diet, whether for reasons of ethics, health, or allergies — in fact, around 4% of adults have some form of food allergy. One of Karakuri’s aims is to help commercial kitchens automate the processes involved in preparing a meal — making the preparation faster while removing human error from the equation.

“Consumer eating habits in and out of the home are changing rapidly as demand increases for healthier options that match specific dietary requirements,” noted Karakuri CEO and cofounder Barney Wragg. “This growth in menu personalization is putting huge pressure on restaurants, cafes, and other food retailers. These providers have historically relied on identically mass-produced meals to maintain their profit margins. By using robotics and machine learning, Karakuri’s systems provide localized micro-manufacturing within an existing restaurant, retail, or commercial kitchen.”

According to Wragg, automation will also enable restaurants to minimize their food waste, packaging, and distribution costs, which collectively have a big impact on a company’s bottom line — not to mention the environment.

This is a trend we’ve seen elsewhere in the technology realm, with numerous startups raising big bucks to help companies cut waste. A couple of months back, VentureBeat wrote about another London-based startup, called Winnow, which is using computer vision and machine learning to help kitchens cut food waste. There are plenty of other examples of automation infiltrating the food services industry, including Mountain View-based Zume Pizza, which operates a kitchen in which robots are heavily involved in the entire pizza-making process.

Karakuri isn’t purely targeting commercial kitchens, though — its robots can be customized for any scenario that requires precise measurements of ingredients. The company will also start selling a lower-cost robot called Marley that is designed for smaller food production hubs and can be used for such “novel applications” as measuring out candy, making ice cream, or pouring cocktails. 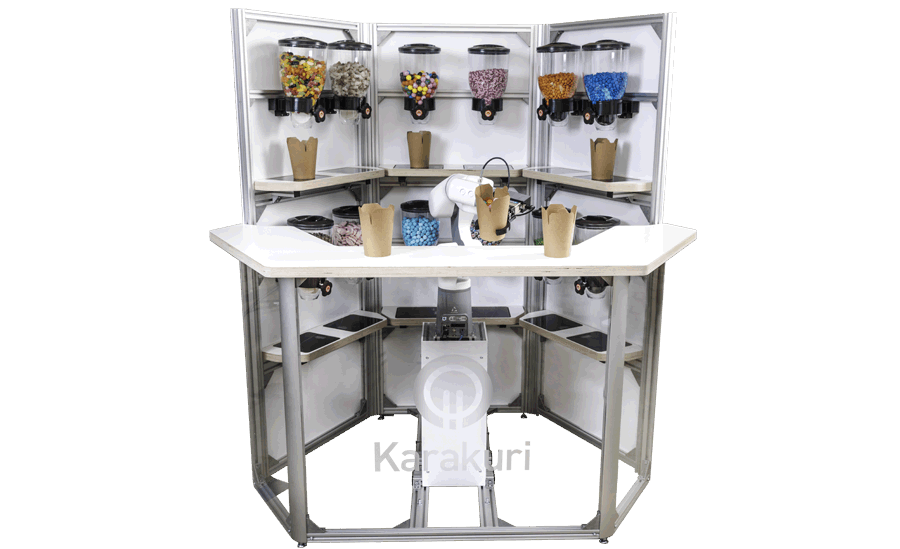 Karakuri’s seed funding is notable, as this is the first technology startup investment for Ocado, a publicly traded U.K. grocery giant built on robotics and automation. Ocado previously developed a picking and packing robot that uses computer vision to determine the best grasp for specific goods, while its customer fulfillment centers (CFS) use conveyors, automated cranes, “goods-to-person systems,” and robots to cart products ready for shipping.

“Our investment in Karakuri, potentially a game-changer in the preparation of food to go, gives us the opportunity to bring the best innovation to the benefit of our own customers, as well as our partners,” added Ocado CEO Tim Steiner.

Karakuri said it will use its fresh cash injection to develop its technology, including patents, and build its team as it looks to expand around the world. And now that Ocado is on board, the supermarket will be looking to leverage Karakuri’s robotics internally, particularly as part of its Ocado Zoom delivery service. Moreover, Ocado said it plans to put Karakuri’s robots in its own staff canteen later this year.