“Blockchain developer” is the top emerging job in the U.S. — according to data  published in LinkedIn’s 2018 U.S. Emerging Jobs report.

Blockchain has come a long way since Satoshi Nakamoto developed a cryptocurrency that allowed strangers to conduct financial transactions anonymously and without the need for intermediaries, such as banks. Bitcoin, as the cryptocurrency is known, has emerged from the shadows of the dark web to claim the attention of the global masses, perhaps most notably over the past year as its value has fallen from the giddy heights of nearly $20,000 last December to under $4,000 today.

It’s not surprising that “What is Bitcoin?” was one of the most commonly asked questions on Google this year.

Intentionally or not, Bitcoin served as a proof of concept for its underlying blockchain technology, and we’re now seeing all manner of use cases develop. Spotify is looking to use blockchain to match royalties with rightsholders by entrenching data such as timestamps and ownership within a media asset. Individuals may also be able to sell their digital games through a blockchain-powered app store, with the original publisher earning a cut of the money. The possibilities really are endless.

But to truly flourish, as the early internet and world wide web did, blockchain needs developers with the skills to build on its foundation and fulfill its potential. That could be why “blockchain developer” tops this year’s LinkedIn emerging jobs report.

Using data gleaned from the LinkedIn Economic Graph, which serves as a “digital representation of the global economy” by analyzing the skills and job openings from across 590 million members and 30 million companies, LinkedIn found that “blockchain developers” has grown 33-fold in the past four years. In this case, “emerging jobs” refers to the growth of specific job titles on LinkedIn profiles in the period between 2014 and 2018.

It’s worth noting here that “blockchain” didn’t appear anywhere in the top 20 emerging jobs in 2017, while “machine learning engineer” topped the list last year — it’s in second place this year. 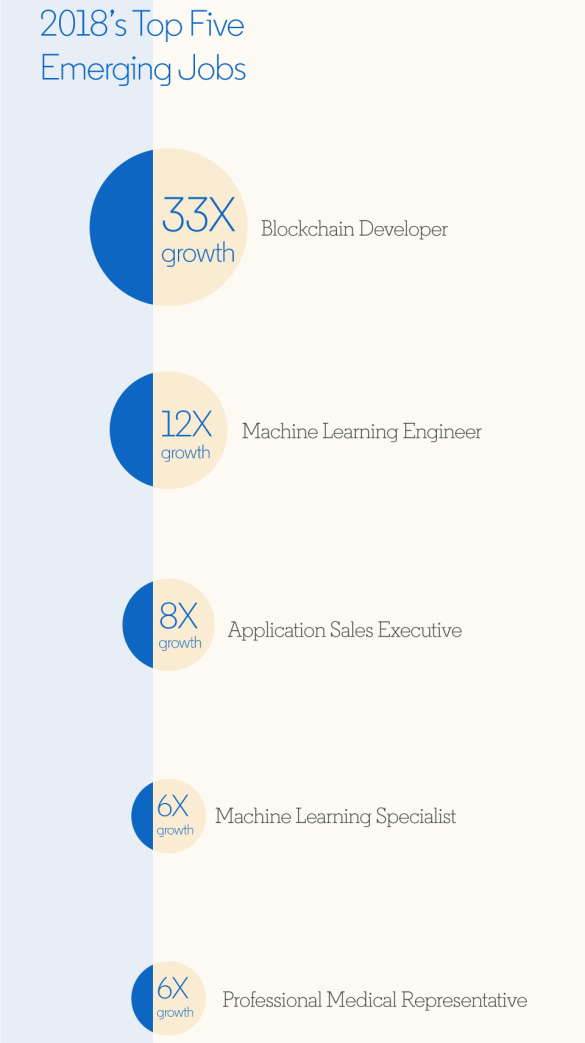 It’s clear that artificial intelligence (AI) technology is more than a fad, which is probably why machine learning featured prominently two years in a row — and this year we’re seeing it split into sub-categories, including “machine learning specialist” (#4) and “machine learning researcher” (#14).

Some might argue that blockchain is still not quite ready for prime time, but its transformative potential is widely accepted. It will be interesting to see if the blockchain developer trend continues into next year.

Meanwhile, if you are interested in pursuing a career as a blockchain developer, LinkedIn data suggests that IBM, ConsenSys, and Chainyard are big when it comes to hiring in the field, while San Francisco, New York City, and Atlanta are geographic hotspots. Udacity also launched a blockchain nanodegree program this year.