As pandemic-driven social distancing and self-isolation measures permeate society, safeguarding vulnerable people’s mental and physical well-being is more important than ever. The vast majority of elderly people would rather “age in place” in their own homes than move in with family or into a multi-residence retirement facility. This trend had already led to a surge in technologies aimed at enabling loved ones and caregivers to monitor seniors and engage with them remotely, but the COVID-19 crisis has lent an air of urgency to the endeavor.

A quick glance across this landscape shows fall-detection contraptions, targeted social networks, and more. Artificial intelligence (AI) in particular is gaining a firmer foothold, with AI-powered social companions and fancy wearables designed to track all manner of activity or changes in behavior.

Fledgling Israeli startup MyndYou is using AI to help care providers assess and monitor elderly patients from afar, with a platform centered on passive data collection, automated engagement, and remote intervention. This week, the company announced that it had raised $4 million in a series A round of funding and unveiled a new partnership with the Aging Life Care Association (ALCA), a U.S. membership-based organization for care professionals.

Though there are plenty of remote-monitoring tools aimed at the senior market already, MyndYou is hoping that a combination of simplicity and automated engagement will set it apart. For the future, the company is aiming to classify specific conditions by looking at all the data it gathers for each individual.

Elderly individuals with smartphones can download the MyndYou For You app, which uses sensors from the phone to passively monitor and analyze patterns in daily activities. These include speech (when the user is on a call), walking, and driving. Changes over time could indicate deteriorating physical or cognitive faculties, and these insights are sent directly to the individual’s care managers, who can then engage their client with targeted interventions. 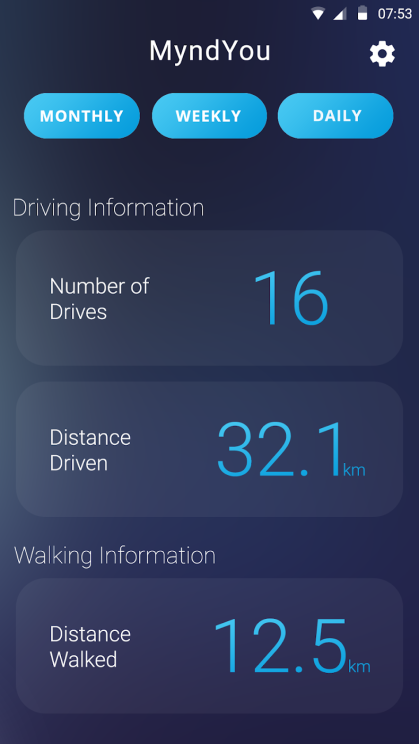 Studies have shown the impact of cognitive decline on driving abilities, with altered emergency stops, U-turns, speed, and lane changes potential signs that something isn’t right. MyndYou passively records GPS and accelerometer data from a user’s smartphone while they’re driving to analyze any shifting patterns.

In the future, MyndYou will also track clients’ sleep patterns, which will require additional sleep-tracking hardware that connects to the user’s phone. The company chose to omit sleep-tracking contraptions for now to streamline the user experience.

“Sleep is an important parameter, but we chose to postpone it as we wanted the initial solution to be as seamless and simple as possible and not to require any additional hardware devices [that] may concern seniors,” MyndYou cofounder and CEO Ruth Poliakine Baruchi told VentureBeat.

The general idea is that users install the app as early as possible, establishing a “baseline” with which to compare future anomalies. However, the app is really just one spoke in MyndYou’s remote-monitoring wheel, as smartphones have less penetration among the elderly. MyndYou has also built a voicebot and virtual care manager, called MyEleanor, that calls individuals and can serve as a “hotline” to asses risk and manage symptoms. The bot can proactively call to check in on clients or respond automatically to anomalies detected by the app, while care providers can use the MyndYou dashboard to call patients directly on any phone, including a landline. MyndYou has developed what it calls a “proprietary analytics engine” for monitoring changes in a person’s health by analyzing their voice only.

“Using the brain as a sensor gives us an advantage, as our models are not condition-specific and do not require a new model for each type of disease,” Poliakine Baruchi said. “Our engine is general, so the same engine is used to analyze a variety of activities. This allows us to build a fingerprint of each person’s complexity and correlate changes in specific activities with different health conditions.”

This is all about enabling early intervention — the sooner a condition is detected, the sooner it can be addressed. For now, MyndYou is focused on giving health care professionals general insights into their patients’ well-being, raising flags if it detects changes from an established baseline. But in the future, it may be able to deliver more granular insights based on specific conditions.

“As our data grows, we will have the ability to deliver condition-specific insights that further guide clinicians and staff — indicating not only that a change has occurred, but the nature and possible sources of the change,” Poliakine Baruchi said. She added that the company is already tagging the data it gathers into “categorized anomaly groups,” such as cardiopulmonary exacerbations, infections, fall risk, and so on.

The kind of feedback nurses, care managers, therapists, and medical assistants can receive ranges from an overview of anomalies that have been detected to their perceived severity and the dates and times they occurred. From the same dashboard, the care provider can also view a “walk analysis” of the patient. 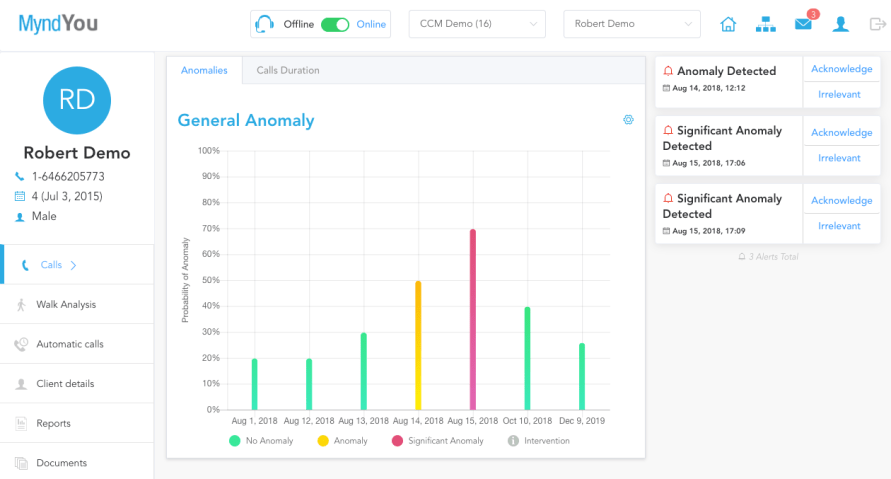 Above: Anomaly detections in the MyndYou dashboard

Carers also view details of all the automatic calls that have been placed, including auto-generated transcriptions of the conversations with MyEleanor. 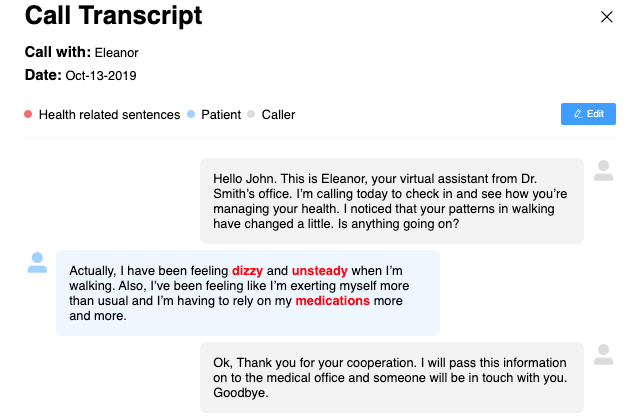 It’s worth noting that MyEleanor isn’t designed to replace human care providers. It’s more about helping scale engagement by making it regular and automated and drawing attention to anomalies that might be missed during a casual conversation.

“Through calls with MyEleanor, providers have the opportunity to introduce consistent and expanded engagement directly to their patients’ homes — all the patient needs is a landline — for screening, symptom management, chronic care management, and more,” Poliakine Baruchi said.

Founded in 2016, MyndYou operates on a software-as-a-service (SaaS) model, charging on a monthly per-user basis. In addition to the U.S. market, the company also operates in Japan after signing a deal last year with the Mizuho Information & Research Institute (MHIR) to develop a proof of concept.

MyndYou already has more than a dozen “accounts” using its technology, mainly physician practices and care managers supporting “high-risk” populations. However, the company also announced a pilot program this month in conjunction with IT services company Involta, which is testing the platform as a way to automatically track employee well-being. MyEleanor checks in with workers from time to time, keeping tabs on subtle changes in their voice.

So MyndYou does have broader aspirations, but for now the focus remains largely on the elderly. ALCA has said that managers will use the MyndYou platform to passively detect general health changes, though the timing of the tie-up hints at the current anxiety around elderly people’s risk of complications from COVID-19 — which is what ALCA members in New York are using the MyndYou platform to address.

COVID-19 screening could involve MyEleanor calling a client who reports shortness of breath, with a follow-up call the next day revealing that the symptoms have worsened. Even if the person doesn’t verbalize their shortness of breath, symptoms that affect the way someone speaks could trigger a voice anomaly alert. Armed with this data, a human care manager may call the client and ask them to contact their doctor. The next stage of the ALCA collaboration will see MyndYou’s smartphone app incorporated into the care management setup.

“The ability to screen and engage with the highest-risk individuals is very much needed these days to keep people physically safe from the outbreak, socially engaged, and supported,” Poliakine Baruchi said.