During a press conference in San Francisco today, scientists at Elon Musk’s Neuralink — a startup founded in 2017 with the goal of creating “ultra-high-bandwidth brain-machine interfaces” that connect humans with computers — gave a progress update. They claim the prototypes they’ve developed to date will help alleviate chronic medical conditions like Parkinson’s and epilepsy and could one day enable amputees to regain mobility and help physically disabled patients hear, speak, and see.

“Neuralink didn’t come out of nowhere — there’s a long history of academic research here,” said Neuralink president Max Hodak during the presentation. “We’re … building on the shoulders of giants.”

Neuralink demonstrated a device embedded within a laboratory rat’s brain that’s capable of extracting information from many neurons at once. Novelly, it uses flexible cellophane-like conductive wires inserted into soft tissue using a “sewing machine,” the work of founding Neuralink members from the University of California Tim Hanson and Philip Sabes, along with UC Berkeley professor Michel Maharbiz. Above: Neuralink’s prototypical system embedded in a rat’s brain.

An autonomous neurosurgical robot taps a computer vision system to guide a needle containing 5-micron-thick bundles of wires and insulation into the brain (avoiding blood vessels). And the wires — which measure a quarter of the diameter of a human hair (4 to 6 μm) — link to a series of electrodes at different locations and depths. At maximum capacity, the robot can insert six threads containing 192 electrodes per minute.

These electrodes relay detected neural pulses to a processor placed on the surface of the skull that’s able to read information from up to 1,536 channels, roughly 15 times better than current systems embedded in humans. It meets the baseline for scientific research and medical applications and is possibly superior to Belgian rival Imec’s Neuropixels technology, which can gather data from thousands of separate brains cells at once. 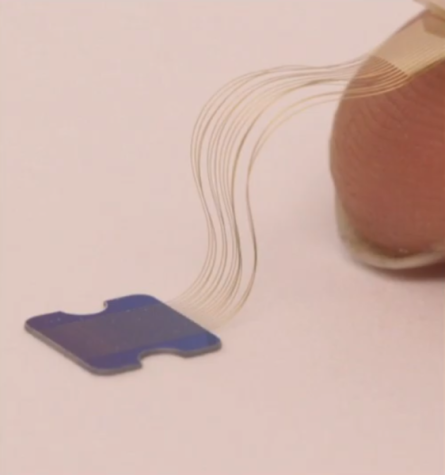 Above: The wires compared with the size of a finger for comparison.

An abstract in a Neuralink whitepaper published today notes that the system could include “as many as 3,072 electrodes per array distributed across 96 threads.” The coauthors of the paper also noted that Neuralink has performed at least 19 surgeries on animals and successfully placed wires about 87% of the time.

During the presentation, Musk hinted that Neuralink has worked with primates. “We definitely need to address the monkey in the room. This is a sensitive subject,” he said. “A monkey has been able to control a computer with its brain.”

High-resolution brain-machine interfaces, or BCI for short, are predictably complicated — they must be able to read neural activity to pick out which groups of neurons are performing which tasks. Implanted electrodes are well-suited to this, but historically, hardware limitations have caused them to come into contact with more than one region of the brain or produce interfering scar tissue.

That has changed with the advent of fine biocompatible electrodes, which limit scarring and can target cell clusters with precision. What hasn’t changed is a lack of understanding about certain neural processes.

Rarely is activity isolated in brain regions, such as the prefrontal lobe and hippocampus. Instead, it takes place across various brain regions, making it difficult to pin down. Then there’s the matter of translating neural electrical impulses into machine-readable information; researchers have yet to crack the brain’s encoding. Pulses from the visual center aren’t like those produced when formulating speech, and it’s sometimes difficult to identify signals’ origination points.

There’s been progress toward this end. In a recent study published in the journal Nature, scientists trained a machine learning algorithm on data recorded from previous experiments to determine how movements of the tongue, lips, jaw, and larynx created sound. They incorporated this into a decoder, which transformed brain signals into estimated movements of the vocal tract and fed them to a separate component that turned the movements into synthetic speech.

“Neural activity in the brain is random — it’s stochastic, which means … the neural representation at the level of the individual neuron is noisy. This is just one of the reasons why we need to record from lots of neurons in order to gain a high-fidelity readout,” said Sabes during the event. “What [we] want to do is give people the ability to tap into [neural representations] … both to repair broken brain circuits and to ultimately give us better access to connections to the world, to each other, and to ourselves.”

The challenges haven’t discouraged Neuralink, which has so far received $158 million in funding (including at least $100 million from Musk) and has 90 employees. It hopes to begin working with human subjects as early as the second quarter of next year in partnership with neurosurgeons at Stanford University. And while the company expects that inserting the electrodes will initially require drilling holes through the skull, it hopes to soon use a laser to pierce bone with a series of small holes. 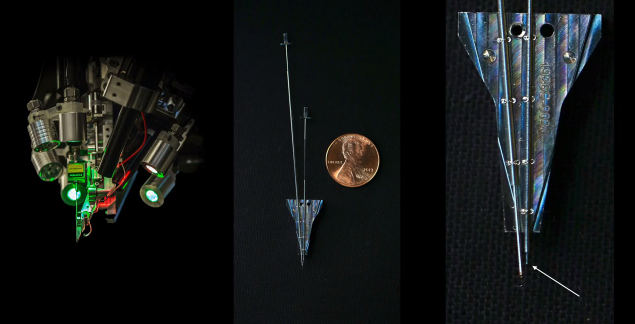 Above: The needle used to insert wires into the brain.

The first Neuralink devices designed for human trials — the N1, a cylinder that’s roughly 8 millimeters in diameter and 4 millimeters tall — contains the aforementioned chip, a thin film, and a hermetic substrate that can interface with up to 1,024 electrodes. Up to 10 can be placed in one brain hemisphere, but Neuralink expects that the first patients will get multiple sensors — four in the brain’s motor areas and one in a somatic sensory area.

The chip contains analog pixels, which amplify and filter neural signals before they’re converted into digital bits. (Neuralink claims the analog pixels are at least 5 times smaller than the known state of the art.) One analog pixel can capture the entire neural signals of 20,000 samples per second with 10 bits of resolution, resulting in 200Mbps of neural data for each of the 1,024 channels recorded.

Above: The N1 chip’s specifications.

Once the signals are amplified, they’re converted and digitized by on-chip analog-to-digital converters that directly characterize the shape of neuron pulses. According to Neuralink, it takes the N1 only 900 nanoseconds to compute incoming neural data.

The N1 will be connected via small wires under the scalp to an inductive coil behind the ear. This will pair wirelessly through the skin to a battery-powered Bluetooth device called the Link. Neuralink says the implants will be configurable through a smartphone app and that patients might be able to control buttons and perhaps redirect outputs from the phone to a keyboard or mouse on a computer. (One of Neuralink’s aspirational goals is to allow a tetraplegic to type at 40 words per minute, said Musk.)

Neuralink’s system faces competition from the Pentagon, which has financed research to develop robotic control systems that would enable brain control of prosthetic devices. Separately, researchers with backing from the Defense Advanced Research Projects Agency (DARPA) have managed to create interfaces allowing quadriplegics to manipulate robot arms with dexterity.

But Musk projects that Neuralink’s system will eventually be used to create what he describes as a “digital super-intelligent [cognitive] layer” that enables humans to “merge” with artificially intelligent software. “The constraint is … input and output speed. The thing that will ultimately constrain our abilit[ies] is bandwidth,” he said onstage.