Driverless delivery startup Nuro is wasting no time extending its reach in the autonomous last-mile delivery market, which is anticipated to be worth $91.5 billion by 2030 by some estimates. This morning, it formally unveiled the R2, its second-generation custom-build shuttle, which is the first of its kind to be granted an autonomous vehicle exemption by the U.S. Department of Transportation’s (DOT) National Highway Traffic Safety Administration (NHTSA). And it announced that the R2 will soon join Nuro’s fleet of self-driving Prius vehicles in Houston, Texas, making deliveries to consumers on public roads from partners including Domino’s, Walmart, and Kroger.

The R2, which was designed and assembled in the U.S. in partnership with Michigan-based Roush Enterprises, features a more durable body that’s able to handle a greater variety of roads, climates, and weather conditions than the outgoing R1. Its smooth and rounded cabin, which has contours where side mirrors would otherwise be placed, creates room for bicyclists and other “vulnerable” road users while improving lateral maneuverability. Furthermore, it has a “pedestrian-protecting” front end that’s unlike a traditional right windshield structure in that it absorbs energy and can collapse inward, thanks in part to redesigned doors that provide more headroom and clearer access to the compartments within.

Elsewhere, the R2 packs sensors that enable it to maintain a 360-degree view of the road at all times using a combination of thermal imaging cameras, RGB cameras, radars, long- and short-range lidar sensors, ultrasonics, and a larger exterior screen for unlocking and interacting with the vehicle’s various storage compartments. Speaking of those compartments, they’re 65% larger in terms of capacity (22.38 cubic feet), and they have temperature control to keep perishable goods, including groceries or meals, fresh. 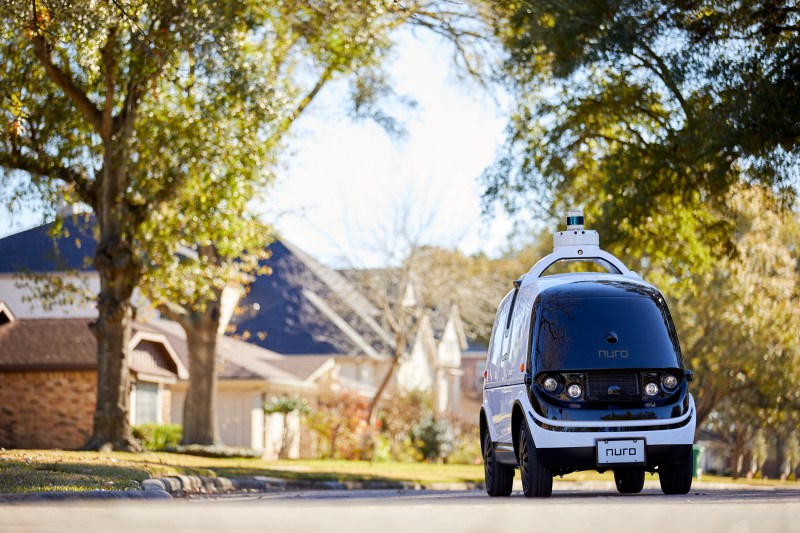 Under the hood, the R2 has a 31kWh battery, redundant braking and control systems, automotive lighting and signals, and a sound generator for pedestrian safety. That all contributes to its 1150kg (2.5 tons) weight, as do payloads, which can range up to 190kg (418 pounds).

The NHTSA exemption will support the R2’s deployment on public roads without certain equipment required for passenger vehicles, according to a DOT press release issued today. Nuro’s new vehicle qualified because of its low speed (25 miles per hour maximum) and because it’s designed solely to carry goods rather than human occupants. That said, Nuro will be permitted to produce and deploy no more than 5,000 R2 vehicles during the two-year exemption period, and it’ll have to report information about the R2’s operation (including the automated driving system) and conduct outreach in communities where it will deliver goods.

“Since this is a low-speed self-driving delivery vehicle, certain features that the Department traditionally required — such as mirrors and windshield for vehicles carrying drivers — no longer make sense,” said U.S. Secretary of Transportation Elaine L. Chao.

Nuro was cofounded in 2016 by Dave Ferguson and Jiajun Zhu, both veterans of the secretive Google self-driving car project that eventually spun out as Waymo. The Mountain View, California-based company has about 400 employees and 100 contract workers and has so far deployed over 75 delivery vehicles. In the coming months it plans to test 50 vehicles on roads in California, Arizona, and Texas, with safety drivers behind the wheel.

“We founded Nuro on the belief that we could reimagine, design, and develop an autonomous vehicle that would make the world a safer place. Our second-generation vehicle will advance our goal of transforming local commerce, and we are gratified that the [DOT], under Secretary Chao’s leadership, is promoting public safety and providing regulatory certainty for the self-driving industry. Today’s decision shows that ‘exemption’ can mean more safety,” said Nuro president Ferguson, who added that Nuro will support the DOT’s efforts to modernize their underlying driverless vehicle regulations. “Our world-class team solved countless novel problems to create this design, and, after extensive modeling, research, and testing, created a vehicle unlike any other on the road today.”