Four short months ago, French company Parrot took the wraps off Anafi, a fold-up, 4K-capable drone that starts at just $700. Parrot has diligently updated the little guy — most recently in August with improved streaming video quality and new photos features. Today, the company announced yet another firmware upgrade, alongside a new SKU — Anafi Extended, which bundles the drone with accessories and a shoulder bag.

First on the list of new features is enhanced HDR. According to Parrot, the enhanced video and photo shooting mode benefits from improved color tone and an adaptive dynamic range that makes adjustments in response to ambient lighting conditions. In dimly lit scenes, like sunsets, it enhances shadow detail, and in brighter lighting it boosts contrast while minimizing noise.

Other highlights are the five new panorama photo modes in FireFlight 6, Anafi’s companion smartphone app: Sphere, Little Planet, Tunnel, Vertical 180, and Horizontal 180. These are generated from roughly a dozen stitched-together photos that take about five minutes to capture in total. Little Planet compresses the scenery into a “floating globe,” and Tunnel mode positions the sky in the center of the image. Meanwhile, Sphere — a 360-degree panorama — works on VR headsets like the Oculus Rift and HTC Vive and supports Facebook’s 360 Photos feature.

Also new is an enhanced Dolly Zoom, an homage to Alfred Hitchcock’s cinematographic flourish. With the tap of a button, Anafi zooms in and locks focus on trees, landmarks, and other points of interest while distorting the background. 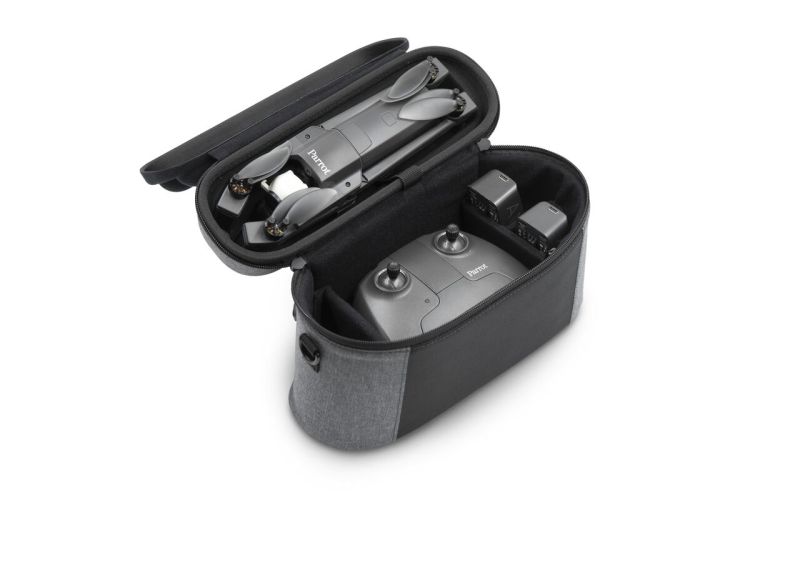 Above: The Parrot Anafi Extended bundle.

Anafi, for the uninitiated, weighs just 0.7 pounds and is 25 percent quieter than its predecessor, the Bebop 2, thanks to a carbon fiber frame filled with hollow glass microbeads. Its arms fold and unfurl in less than three seconds, and it doesn’t disappoint on the image quality front — the gimbal-mounted 21-megapixel Sony IMX230 sensor can shoot up to 30 frames per second in 4K at 100Mpbs, with lossless zoom of up to 1.4 times.

But Anafi has serious competition — namely DJI’s Mavic 2 Pro and Mavic 2 Zoom, which were unveiled in August. They’re less portable, but they have a higher top speed (44 miles per hour versus Anafi’s 33 miles per hour) and longer battery life (31 minutes versus 25 minutes), plus 10 optical avoidance sensors. They’re also more expensive: The Mavic 2 Pro and Zoom start at $1,249 and $1,449, respectively.

The segment’s large enough to fit all of them, it would seem, as the total consumer drone market is projected to be worth over $9 billion by 2024, with sales exceeding 15 million units.