Self-driving cars are coming to Indiana, courtesy Santa Clara, California-based PerceptIn. The startup today announced that it’s relocating its headquarters to the IoT Lab accelerator in Fishers, a suburb of Indianapolis, to launch an autonomous vehicles pilot program, creating 50 new jobs by 2022. As a part of the deal, the Indiana Economic Development Corporation will offer PerceptIn up to $3,553,500 in conditional tax credits.

PerceptIn plans to deploy self-driving vehicles — dubbed DragonFly Bus — in downtown Fisher by early 2020, which will transport passengers from 12:30 to 2:30 p.m. daily to and from restaurants and office complexes. The vehicles, which won’t exceed 20 miles per hour while in use, will be monitored by safety drivers or teleoperators and hold up to eight people. The routes might expand pending the results of the pilot program, according to PerceptIn.

“We’re extremely excited to relocate our headquarters to Indiana,” said CEO Shaoshan Liu. “Indiana’s commitment to growing and enhancing its technology sector, along with its business-friendly environment and collaborative industry partnerships, is why we chose to locate here. Additionally, we look forward to  deploying our autonomous microtransit services in Fishers, and increasing our presence throughout the state, setting an example for the rest of the nation on utilizing advanced technologies to improve public transportation systems.”

The vehicles in question will be built atop DragonFly Pod, the autonomous platform PerceptIn has been developing since early 2016. It’s closer to a golf cart than a car in size and shape, and that’s because it’s designed for “constrained environments” like college and corporate campuses. 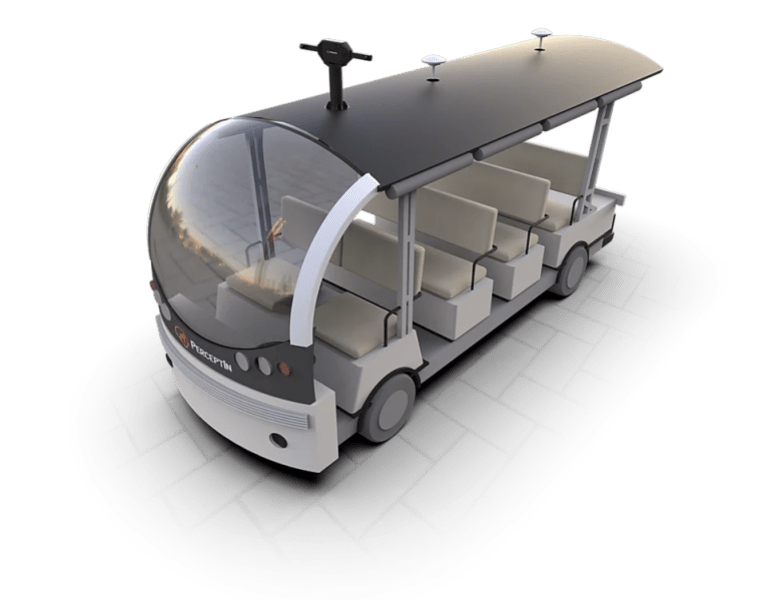 PerceptIn has been testing DragonFly Pods in an industrial park, where a prototypical fleet has driven more than 10,000 collective miles. Each Pod is powered by Nvidia’s Jetson platform and equipped with four high-definition RGB cameras, four sets of radars, and GPS, plus wheel odometry sensors that count the number of rotations completed by each wheel and ultrasound sensors that detect nearby obstacles.

With the odometry data alone, PerceptIn’s software platform can locate a Pod to within 20 centimeters. Add the cameras to the mix, and it can construct a panoramic point cloud at 30 frames per second that helps localize the Pod in three-dimensional space.

But the Pod’s secret sauce might be its modularity, which allows components to be swapped out on the fly. The Pod’s off-the-shelf chassis can be replaced with a cheap storage container, for instance, and its camera array could be upgraded with far-range lasers.

That gives the DragonFly Pod a leg up on other self-driving platforms, most of which can’t be customized. A typical autonomous car uses a combination of lidars and radars, in addition to GPS, cameras, inertial measurement units (IMUs), and onboard computers with powerful graphics cards and processors. The lidar alone can cost as much as $8,000, and most cars sport several of them; the average IMU runs $4,000.

A single entire DragonFly Pod costs $40,000 in total, by contrast.

PerceptIn emerged from stealth in March 2018, and it’s raised $11 million to date from Samsung Ventures and others. It claims to have “visual intelligence” hardware and software projects in the works for over 100 customers, including Huawei, ZTE, UC Irvine, Wayne State University, a partner in Detroit, and unnamed industrial parks in China.

PerceptIn is chasing after a lucrative market, to be sure. According to marketing firm ABI, as many as 8 million driverless cars will be added to the road in 2025, and Research and Markets anticipates that there will be some 20 million autonomous cars in operation in the U.S. by 2030.

It’s not putting all of its eggs in one basket, though: PerceptIn unveiled a visual perception system for trains in January. And in November, it launched a driverless mobile vending machine that displays video ads.