Despite high-profile accidents, unresolved regulatory ambiguities, and looming debates about liability, the autonomous vehicle market has made real progress in the past decade. You needn’t look further for evidence than Google spinoff Waymo, which announced in August that its self-driving cars have racked up 8 million real-world miles.

But cost remains the elephant in the room. While autonomous cars aren’t as expensive as they used to be, they’re not exactly competitive with midrange family sedans. (Think hundreds of thousands of dollars.)

Dr. Shaoshan Liu says it doesn’t have to be that way. The University of California Irving graduate and former Baidu engineer is the founder and CEO of PerceptIn, a robotics startup headquartered in Santa Clara, California that’s been developing an in-house self-driving car platform since 2016. PerceptIn today unveiled the DragonFly Pod, an autonomous vehicle priced at just $40,000 that’ll go on sale in November.

“We want to build autonomous vehicles that are affordable and reliable,” Liu said. “[Our] vision [has always been] to scale the benefits of robotization and autonomous driving to all … and not just to the privileged few.”

You won’t mistake DragonFly Pod for a self-driving car — it’s closer to a golf cart in size and shape. That’s because instead of traveling on highways and busy thoroughfares, it’s destined for college campuses, industrial parks, and other “constrained environments.”

PerceptIn’s been testing DragonFly Pods for the past two years in an industrial park, where the prototypical fleet has driven more than 10,000 collective miles. Each Pod — which maxes out at about 40 miles per hour — is powered by Nvidia’s Jetson platform and equipped with four high-definition RGB cameras, four sets of radars, and GPS, plus wheel odometry sensors that count the number of rotations completed by each wheel and ultrasound sensors that detect nearby obstacles.

With the odometry data alone, PerceptIn’s software platform can locate a Pod to within 20 centimeters. Add the cameras to the mix, and it’s able to construct a panoramic point cloud at 30 frames per second that helps localize the Pod in three-dimensional space.

Liu’s been awarded more than 150 U.S. and international patents on the tech to date.

The DragonFly Pod’s secret sauce, though, is its modularity, which allows customers to swap out components on the fly. If one of them, say, wanted a no-frills autonomous delivery car, they could ditch the Pod’s off-the-shelf chassis for a cheap storage container. If they wanted to increase the maximum speed of the Pods, on the other hand, they could replace the camera array with far-range lasers.

“People often say that building an autonomous vehicle is just as difficult and far-fetched as building a rocket, but we disagree,” Liu said. “[We’ve] simplified the whole process to make the building of autonomous vehicles not that much different from that of building with Legos.”

He claims this gives the DragonFly Pod a leg up on other self-driving platforms, most of which can’t be customized. A typical autonomous car uses a combination of lidars and radars, in addition to GPS, cameras, inertial measurement units, and onboard computers with powerful graphics cards and processors. The lidar alone can cost as much as $8,000, and most cars sport several of them. And the average IMU runs $4,000. 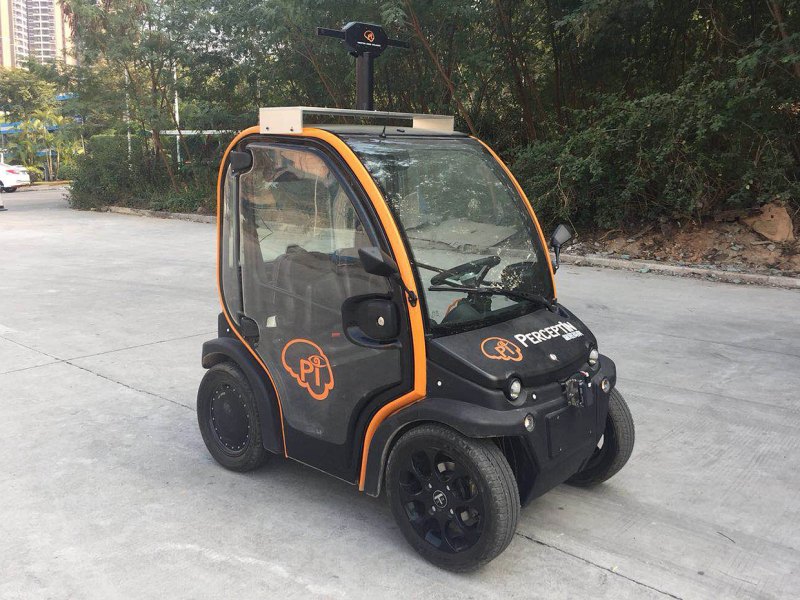 But savings will never come at the cost of safety, Liu was quick to note. Every DragonFly Pod will be remotely monitored by teleoperators who’ll be able to step in and take control in the event something goes wrong.

“We are … committed to the task of enabling people to create AVs and not just use them,” Liu said.

PerceptIn emerged from stealth in March, but it’s already raised a decent chunk of change: $11 million overall, including a $2 million seed round in 2016 and an $8 million Series A in 2017. Samsung Ventures, Samsung’s investment arm, was an early partner, and PerceptIn said it has “visual intelligence” hardware and software projects in the works for over 100 customers, including Huawei.