The Qamcom-Arbe deal is significant for technical decision makers because it reflects accelerating commercial interest in next-generation computer vision technologies, notably including ones that use wireless radio waves to supplement or replace human-perceptible visual data. It also demonstrates the increasing movement of solutions developed for the still-nascent autonomous car industry into other sectors with nearer-term potential applications.

As a vehicle travels through an environment, Arbe’s Phoenix system records its surroundings using dozens of millimeter wave antennas, creating volumetric 4D visualizations at a TV-like rate of 30 frames per second. Arbe notes that the spatial data is generated at an actual 2K resolution; that’s two to ten times higher than competing systems, a detail level that creates the equivalent of 3TB per second of data, yet enables hundreds of objects to be tracked simultaneously in distance, height, depth, and speed. Thanks to the Phoenix system’s highly detailed imagery, Arbe boasts “close to zero instances of phantom objects,” enabling vehicles and any human operators to confidently make decisions without false alarms. 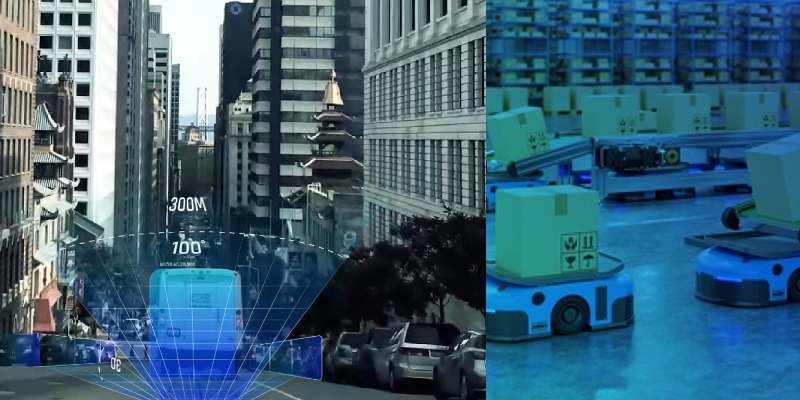 Because Phoenix relies on radio waves rather than visible light, it’s able to visualize open spaces accurately regardless of the weather, lighting, or dusty/debris-laden environments it’s operating in — a critical benefit to industrial vehicles that operate at night on roads, in mine caves, or in poorly lit agricultural fields. Moreover, it can classify, track, and avoid obstacles ranging from motorized vehicles to bicycles to people within a large field of view: Arbe boasts a 100-degree azimuth with 1-degree resolution, 30-degree elevation with 2-degree resolution, 300-meter long-range sensing with 7.5- to 60-centimeter resolution, and Doppler resolution of 0.1 meter per second.

“Arbe’s 4D Imaging Radar Solution has the potential to be the primary sensor candidate for the sensor suite of any autonomous and semi-autonomous applications and next generation perception platforms,” Qamcom CEO Johan Lassing said. The sensor system, he notes, provides visuals “close to the image that vision based sensors achieve that also has the properties of radar.”