According to the latest report by Tortoise Intelligence, worldwide investment into AI companies has increased by 115% since 2020, marking the largest year-on-year growth in AI investment for at least two decades. Total AI investment reached $77.5 billion in 2021, a substantial increase from the previous record set last year of $36 billion.

Overall, it’s clear from the report’s findings that COVID-19 has contributed to a surging global interest in AI from both governments and investors. A sudden need for digital collaborative spaces and remote working tools during the pandemic forced business leaders to understand the vital need for digitization, said Michael Chui, partner at the McKinsey Global Institute. This demand included further investments in AI and automation.

The U.S. remains a global leader in AI thanks to a world-beating commercial scene, a large talent pool, and stellar research initiatives. In second place is China, which supports the rollout of AI technologies with its robust infrastructure and ambitious government strategy, but falls behind when it comes to talent. The U.K. remains in third place due to its superb pool of home-grown researchers and a strong AI startup scene, but still has areas of weakness in its development and operating environment, including a costly visa regime. 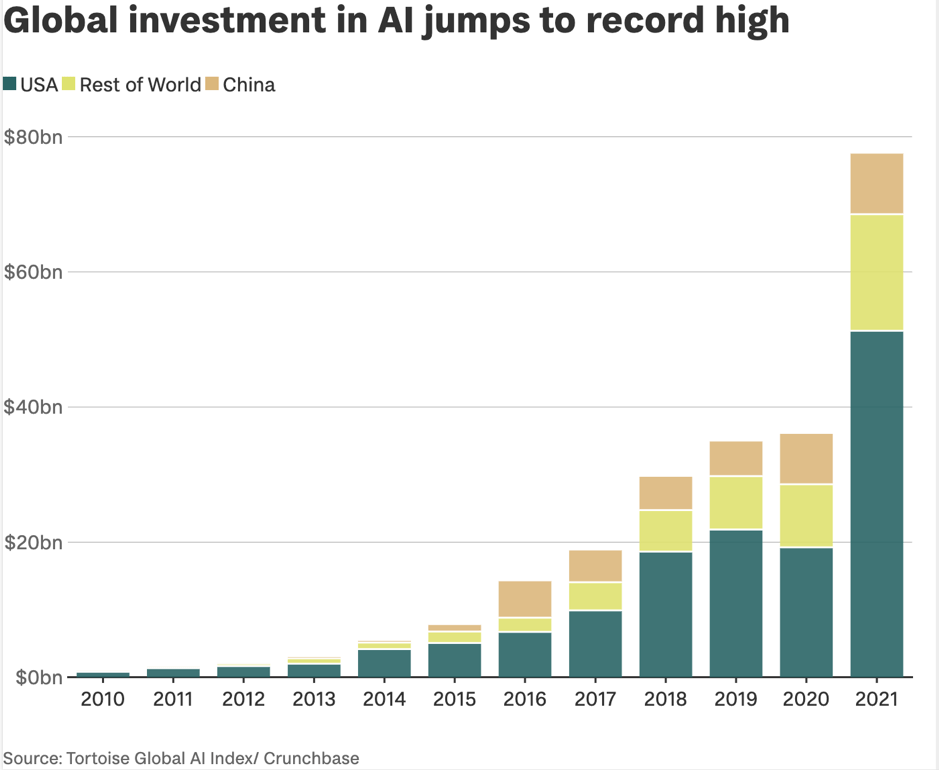 When it comes to funding per capita, however, Israel — which has knocked South Korea out of its 5th place spot — beats all other countries. Israel had $325,000 in funding invested in AI-focused companies for every million people. It also comes first in the world for the share of GDP going to R&D.

Governments appear to have reacted to the AI zeitgeist, too. Since Tortoise Intelligence’s last report, eight additional countries have officially released government strategies on AI: Slovenia, Turkey, Ireland, Egypt, Malaysia, Brazil, Vietnam, and Chile. It’s a clear acknowledgement of the increasing popularity of this technology.

The Tortoise Global AI Index ranks nations by AI preparedness. It analyzes metrics including investment into AI, the strength of a nation’s talent pool, the quality of its research, supercomputing capabilities, and the level of ambition and muscle behind its national government strategies.