(Reuters) — The Roomba robotic vacuum has been whizzing across floors for years, but its future may lie more in collecting data than dirt.

That data is of the spatial variety: the dimensions of a room as well as distances between sofas, tables, lamps and other home furnishings. To a tech industry eager to push “smart” homes controlled by a variety of Internet-enabled devices, that space is the next frontier.

Smart home lighting, thermostats and security cameras are already on the market, but Colin Angle, chief executive of Roomba maker iRobot Corp, says they are still dumb when it comes to understanding their physical environment. He thinks the mapping technology currently guiding top-end Roomba models could change that and is basing the company’s strategy on it.

“There’s an entire ecosystem of things and services that the smart home can deliver once you have a rich map of the home that the user has allowed to be shared,” said Angle.

That vision has its fans, from investors to the likes of Amazon.com Inc, Apple Inc and Alphabet who are all pushing artificially intelligent voice assistants as smart home interfaces. According to financial research firm IHS Markit, the market for smart home devices was worth $9.8 billion in 2016 and is projected to grow 60 percent this year.

Angle told Reuters that iRobot, which made Roomba compatible with Amazon’s Alexa voice assistant in March, could reach a deal to sell its maps to one or more of the Big Three in the next couple of years.

So far investors have cheered Angle’s plans, sending iRobot stock soaring to $102 in mid-June from $35 a year ago, giving it a market value of nearly $2.5 billion on 2016 revenue of $660 million.

But there are headwinds for iRobot’s approach, ranging from privacy concerns to a rising group of mostly cheaper competitors — such as the $300 Bissell SmartClean and the $270 Hoover Quest 600 — which are threatening to turn a once-futuristic product into a commoditized home appliance.

Low-cost Roomba rivals were the subject of a report by short-seller Ben Axler of Spruce Point Capital Management, which sent the stock down 20 percent to $84 at the end of June.

“I think they have a tremendous first-mover advantage,” said Mesdag, who thinks iRobot would be a great acquisition for one of the Big Three. “The competition is focused on making cleaning products, not a mapping robot.”

Founded in 1990, iRobot saw early success building bomb disposal robots for the U.S. Army before launching the world’s first “robovac” in 2002. The company sold off its military unit last year to focus on the consumer sector, and says the Roomba — which ranges in price from $375 to $899 — still has 88 percent of the U.S. robovac market. 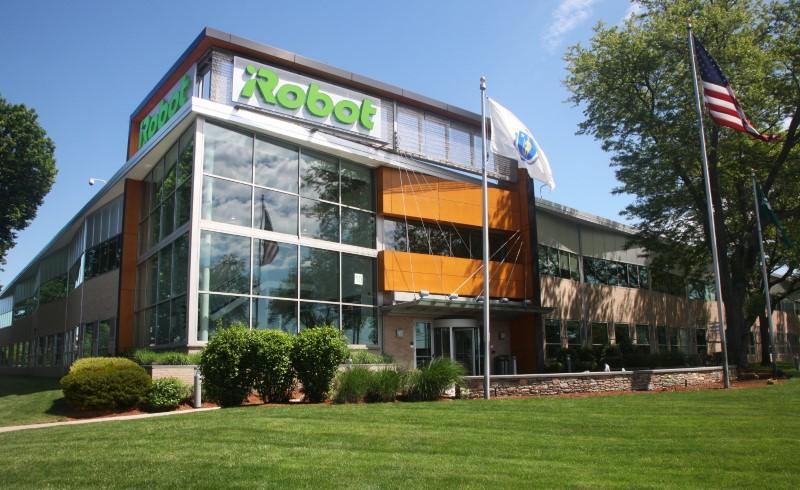 Above: iRobot headquarters is seen in Bedford, Massachusetts, U.S. in this recent photo released July 20, 2017.

All robovacs use short-range infrared or laser sensors to detect and avoid obstacles, but iRobot in 2015 added a camera, new sensors and software to its flagship 900-series Roomba that gave it the ability to build a map while keeping track of their own location within it.

So-called simultaneous localization and mapping (SLAM) technology right now enables Roomba, and other higher-end Robovacs made by Dyson and other rivals, to do things like stop vacuuming, head back to its dock to recharge and then return to the same spot to finish the job.

Guy Hoffman, a robotics professor at Cornell University, said detailed spatial mapping technology would be a “major breakthrough” for the smart home.

Right now, smart home devices operate “like a tourist in New York who never leaves the subway,” said Hoffman. “There is some information about the city, but the tourist is missing a lot of context for what’s happening outside of the stations.”

With regularly updated maps, Hoffman said, sound systems could match home acoustics, air conditioners could schedule airflow by room and smart lighting could adjust according to the position of windows and time of day.

Companies like Amazon, Google and Apple could also use the data to recommend home goods for customers to buy, said Hoffman.

One potential downside is that selling data about users’ homes raises clear privacy issues, said Ben Rose, an analyst who covers iRobot for Battle Road Research. Customers could find it “sort of a scary thing,” he said.

Angle said iRobot would not sell data without its customers’ permission, but he expressed confidence most would give their consent in order to access the smart home functions.

Another Roomba risk is that cheaper cleaning products are what consumers really want. In May, the New York Times’ Sweethome blog dethroned the $375 Roomba 690 as its most-recommended robovac in favor of the $220 Eufy RoboVac 11, saying the connectivity and other advanced features of the former would not justify the greater cost for most users.

One potential iRobot bulwark against these new competitors: a portfolio of 1,000 patents worldwide covering the very concept of a self-navigating household robot vacuum as well as basic technologies like object avoidance.

A handful of those patents are now being tested in a series of patent infringement lawsuits iRobot filed in April against Bissell, Stanley Black & Decker, Hoover Inc, Chinese outsourced manufacturers and other robovac makers. The litigation is the most significant in iRobot’s history.

A lawyer for Hoover declined to comment. Lawyers for Bissell and Black & Decker did not respond to requests for comment.

The patents are a “huge part of our competitive moat,” Angle said. “It is getting really hard not to step on our intellectual property.”