Starship Technologies, a robotics startup created by Skype’s cofounders, has launched a large-scale commercial autonomous delivery service aimed at corporate and academic campuses in Europe and the U.S.

Founded out of Estonia, Starship Technologies has initiated myriad autonomous delivery trials over the past few years, covering food and other small packages, in more than 100 cities. Though the robots are autonomous, they can also be monitored and controlled remotely by humans if the situation requires it. The company was created by Skype’s Ahti Heinla and Janus Friis in 2014, and it has raised around $17 million in venture capital funding.

The latest program could become one of the largest autonomous delivery services globally, with little armies of robots deployed across campus in a range of situations, including delivering food or transferring goods. The company said it plans to launch around 1,000 robots by the end of this year on a number of as-yet-undisclosed campuses. 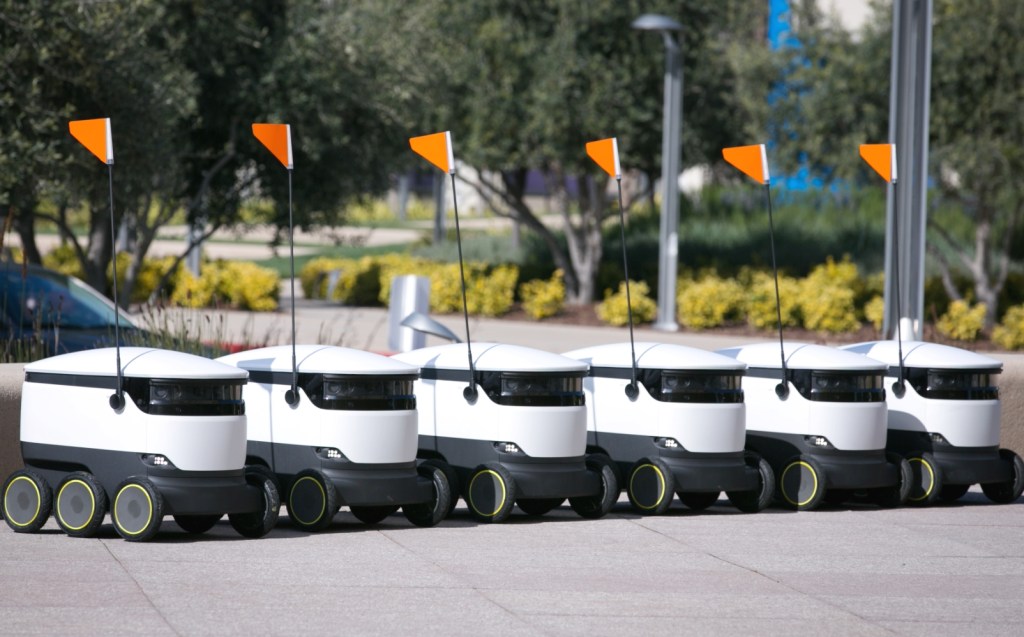 The launch is an extension of an existing pilot Starship has been running in conjunction with food service giant Compass Group on Intuit’s Mountain View premises. Indeed, workers there have been able to order food through Starship’s mobile app, which is handy, given that the campus covers around 4.3 acres — a long distance to traverse for a quick bite.

Some might worry that such a service gives workers one less reason to move from their desks, and that is certainly a potential outcome here: Why waste 30 minutes traveling to and from the canteen and waiting in line when your meal can be delivered more or less to your desk?

On the flip side, others will argue that this system gives workers more time to do enjoyable activities on their breaks. Plus, it may give employees who would otherwise be inclined to skip meals in order to finish their work an opportunity to actually eat something. Indeed, according to Intuit, one of the most popular delivery items so far has been breakfast sandwiches. “I normally miss breakfast because I’m in a rush on the way to work, but this service has allowed me to have breakfast again, by bringing it to me,” noted Intuit life cycle marketing manager Ha Ly.

Plus, the purpose of Starship’s robots isn’t exclusively food, meaning some campuses may use them purely for delivering supplies.

“The rollout of Starship’s campus offering represents a major milestone in the development of delivery robots,” said Starship CEO Ahti Heinla. “Today’s announcement signals the next step in Starship’s journey. By providing campuses with our platform, we are leading the deployment of autonomous delivery at scale worldwide.”

Other players in the burgeoning robotic last-mile delivery space include Marble, which recently raised a fresh $10 million in funding from big names such as Tencent. Nuro, which launched out of stealth back in January with $92 million in funding, is building road-faring machines more akin to cars.