Omer Molad thinks the job hiring process is broken. Luckily, he’s in a position to fix it.

Molad is the cofounder and CEO of Vervoe, an Australia-based startup that today announced the launch of an artificially intelligent platform that evaluates applicants’ on-the-job skills and automatically recommends top scorers to hiring managers. The goal, Molad told VentureBeat in an interview, is to make hiring about merit, not background, and to eliminate the need for résumé screening that can lead to biases in hiring.

“The traditional hiring process exists due to constraints that have plagued us for many years,” he said. “The laws of physics prevent companies from interviewing every candidate, so they pick and choose based on whose background stands out and gravitate toward people they like.”

The company is partly informed by Molad’s own experiences in the job market. “When I moved to Melbourne, I couldn’t get an interview,” he told me. “The recruiters cared about things like whether I had a certain degree, and how long I’d been in the country. I felt marginalized, and it was really frustrating.” 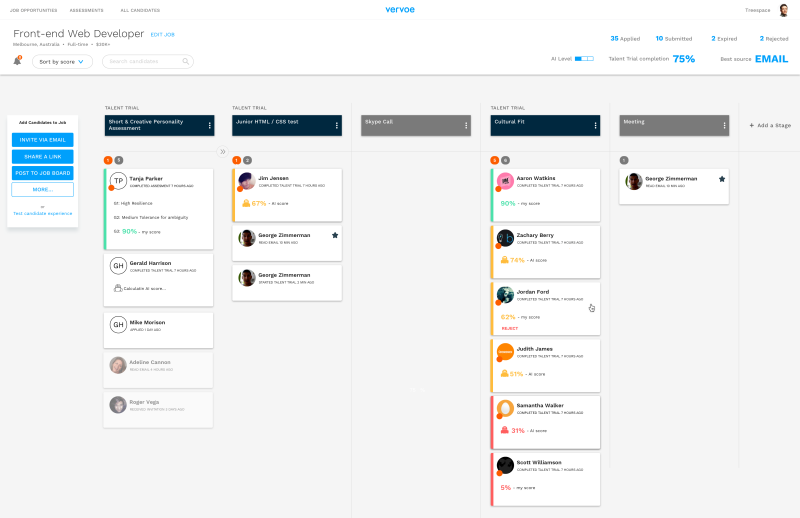 Vervoe’s funnel starts at the recruitment stage. When candidates apply for a listing on a job board or social media, they’re asked to complete an automated interview composed of employer-curated questions. (Vervoe offers a library of bespoke interview templates for roles across retail, food, banking, health, and other industries.) Recruiters grade their answers on a scale of one to ten, and advance a select few to the next step: an on-the-job simulation. That’s where AI comes in.

Here, would-be employees complete assessments — Talent Trials, in Vervoe’s parlance — that mirror the applied-for role’s day-to-day responsibilities. It’s a menagerie of skills tests, coding challenges, and personality quizzes, all of which recruiters can swap out and customize as needed. Some come from third parties or Vervoe’s trial builder, which lets recruiters create tests from scratch. And others are crafted by an in-house, New York-based biopsychology team.

“It’s really about making it as realistic as possible,” Molad said. “We focus on how [candidates] do the work and communicate.”

Throughout testing, Vervoe’s system records data points like how much time candidates spend on particular tasks and the speed at which they type. The stats aren’t all that significant in isolation, but taken together, they “correlate strongly” to employer actions — the platform is 83 percent accurate in predicting top performers across all job types, Molad said.

Those who pass assessments with flying colors move onto in-person or remote interviews; recruiters can request they upload work samples — including audio and video recordings — to Vervoe’s web platform.

The results speak for themselves. One of Vervoe’s clients — Home Maid Better, a cleaning company in Oklahoma — was able to automate 70 to 80 percent of the thousands of applicants who apply for positions every few weeks. Molad said other customers, including eBay, Tesla, Uber, Canadian fitness chain F45, HubSpot, and Freshdesk, have seen experienced similar gains in recruitment productivity.

“Every candidate is different, and so is every employer,” Vervoe cofounder and CTO David Weinberg said. “These new AI algorithms offer a totally unique, multilayered approach, allowing bespoke feedback about the candidates and preferences of each individual employer. The machine-learning prediction also improves each time … increasing the accuracy well beyond 83 percent. Employers are now able to evaluate 10,000 candidates in the same time it takes to evaluate one.”

For Molad, equally as important as the platform’s scalability is its impartiality. About 62 percent of assessments on the platform are completed by women, he said — a notable statistic, given that women make up just 5 percent of CEOs in the S&P 1500 index and 11.5 percent of the highest-paid executive jobs.

In the coming months, Vervoe plans to introduce a feature that will show employers which biases recruiters seem to be exhibiting based on their selection criteria.

Vervoe, which launched in August 2017, has been used by more than 4,000 employers in 75 countries. In May, it raised $3.5 million in a funding round led by Seek, former Etsy and Squarespace COO Jesse Hertzberg, and others; to date, it’s raised $4.5 million.