Investors have been putting billions of dollars into AI startups every year for several years now. But they’re focusing on the wrong type of play.

The large number of AI startups they’ve been funding are building vertical solutions, often from scratch, putting themselves in competition with technology giants — a battle they will lose most of the time.

Meanwhile, there is an increasingly obvious misalignment between what corporate customers expect from AI and what’s currently available in the market

Therefore, both AI investors and founders would be better off focusing on the opportunities around AI implementation, an area where customers struggle most.

Investment in U.S. AI startups has grown from less than $1.2 billion in 2013 to over $9 billion in 2018. Moreover, in 2018 we witnessed the start of the slowdown in the number of deals (466 deals in 2018 vs. 533 deals in 2017), coupled with the continued growth in overall investments (thanks to larger late-stage rounds), which suggests the industry is now approaching its maturity. 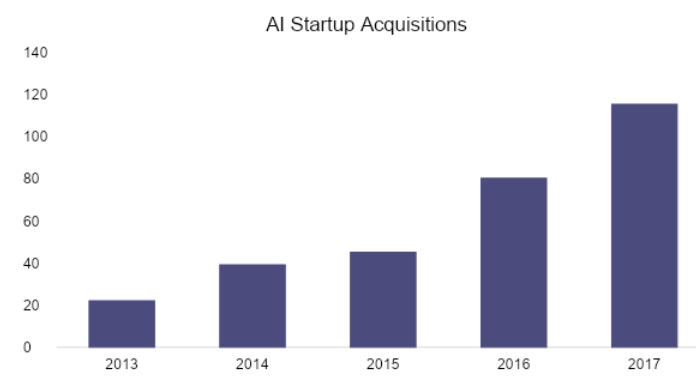 The number of M&A transactions has been growing fast as well, increasing more than five-fold from 2013 to 2018 (115 in 2018 vs. 22 in 2013). What’s interesting, however, is that despite a huge amount of investment pouring into the AI space, we are also seeing a relative lack of large exits. So far, there have only been two exits at a valuation higher than $1 billion (Roche Holding acquiring Flatiron Health for $1.9 billion in February 2018, and Ford buying Argo AI in 2017). We also haven’t seen a substantial number of public offerings among AI startups to date. 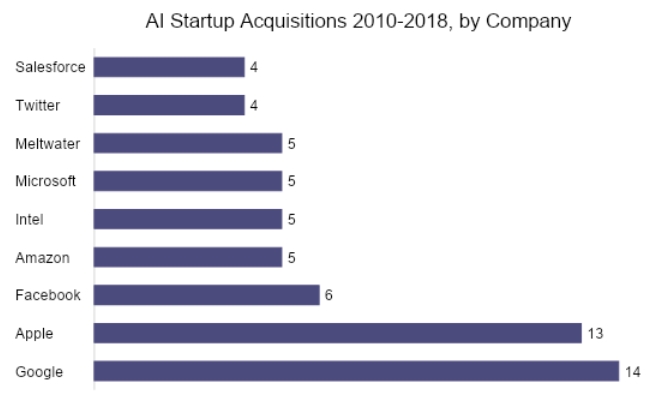 If we take a look at the list of the most prolific acquirers in the U.S., we see all the big tech firms we’ve come to associate with successful applications of AI. This is quite consistent with the lack of large acquisitions or IPOs so far: Most of the big tech firms are purchasing these startups at a fairly early stage and thus are buying them for their founding teams, or for the technology, rather than acquiring already established businesses.

On its own, this trend isn’t necessarily a problem — after all, AI talent remains scarce, and tech giants might be able to support the development of the most promising technologies over much longer time spans than most VC firms would be able to tolerate.

The trend does, however, raise questions about the maturity of AI ecosystem as a whole. It also poses a dilemma for investors, as acqui-hires often don’t provide a path to sustainably good returns for two reasons:

First, multiple analyses of VC returns done over the years have provided clear evidence that in order to deliver high returns, investors need to find companies capable of delivering home runs that will then compensate for the losses made on other investments. The valuations in most acqui-hire deals are far too low to deliver that big-dollar home run.

Second, an investment strategy focused on exiting through acqui-hires can be an exceedingly fickle one. Oftentimes, investors effectively pay for the founding team to build useful knowledge and skills only to then see them being then hired by big tech firms as soon as the startup starts failing or struggling to scale under the pressure from competition or the pace of technology advancements. Unless the acquirer wants the technology developed by the startup more than it wants to hire the team, it’s easier simply to poach key team members rather than spend money acquiring the entire company.

An alternative strategy pursued by a substantial number of startups and investors funding those has been to focus on building vertical solutions, often starting at a platform level and then proceeding all the way to the end product, in the hopes to build a robust product company capable of competing with the largest technology players.

While this approach is bold enough to potentially deliver the sought-after home runs, the amount of investment required to compete with big tech players is often just too large for most startups. The tech giants are often eyeing investment horizons that are much longer than anything available to startups. The giants can also often leverage their existing mature businesses (such as cloud computing) to extract additional value from their AI products, reducing the need to directly monetize those — a luxury most startups will never have.

Where the real opportunities lie

That’s not to say there isn’t a significant opportunity in the AI space for startups – on the contrary, the appetite for AI-infused products and services is rapidly increasing. Today, 42% of executives believe AI will be of critical importance within two years, according to Deloitte, and the number of mentions of AI on earnings calls has also skyrocketed in the last three years.

However, according to another report from PwC, only 4% of surveyed tech executives in 60 countries have successfully implemented AI, with many experiencing challenges in implementing AI within their organizations. Security issues, privacy concerns, lack of appropriate skills, and lack of understanding among employees about the technologies being adopted are commonly cited as key barriers to successful adoption. It’s also telling that, according to Gartner, when asked about the expectations around AI implementation, most CIOs today tend to emphasize cost optimization and efficiency improvements, with only 4% focusing on using AI to gain additional business/capture new customers (which typically is a more powerful lever to drive technology adoption). 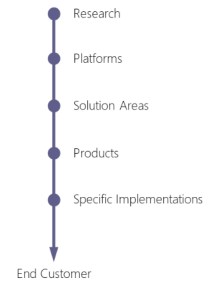 This creates a huge opportunity for both startups and investors. Instead of playing an unpredictable and dangerous game of competing with tech giants on their own turf, or hoping to build a piece of technology or product that would be attractive enough for the startup to be purchased in an acqui-hire, those willing to work to help customers implement existing AI products and to build specialized solutions on top of already highly capable platforms from big tech players would be solving a significant customer pain and would also find tech giants to be partners rather than competitors.

Identifying investment opportunities requires looking at the industry holistically. If you visualize the space as a series of “building blocks” (each defined as a specific niche in the ecosystem) that go all the way from initial research to selecting product platforms to implementation, the areas of opportunity become clear. Investors should evaluate the level of maturity of these blocks and any misalignment between customer expectations and the solutions being offered. 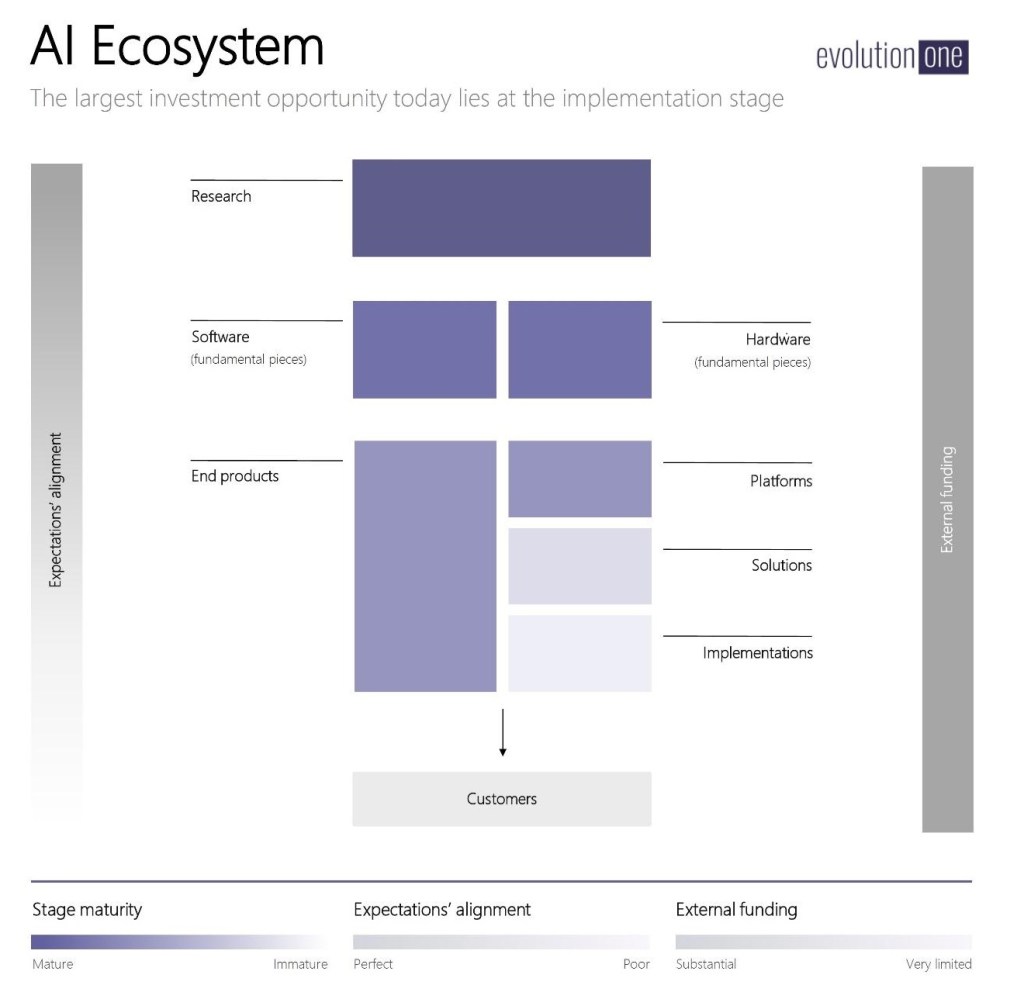 In the AI space today, there is plenty of funding available at all stages, but the feedback loop among the downstream players (specifically in the B2B segment) is malfunctioning. Investors that choose to focus on closing the gap between customers and products by funding companies working at the implementation stage stand a better chance of reaping consistently high returns compared to the rest of the market.

Alex Stern is a co-founder of Evolution One. He also does market intelligence for Cloud & AI at Microsoft. He previously worked in early-stage venture capital, focusing on ecosystem value creation and led venture operational development for multiple portfolio companies.

Eugene Sidorin is a co-founder of Evolution One. He is also responsible for competitive strategy development and investments in business and AI embedded applications space at Microsoft. He has extensive experience in the fields of algorithmic trading and software development as a serial entrepreneur.