Big data is big business. About 53 percent of companies in 2017 said they’ve adopted some form of data analytics, and the industry’s forecast to hit $103 billion by 2027 (up from $49 billion in 2018). But not all platforms are created equal, which is why, according to some reports, enterprises on average access just 1-3 percent of the data they collect.

“It’s an industry problem we see: Businesses are sitting on a mountain of data, doing analysis, and collecting hundreds of billions of data points across mobile, web, and other experiences, but most of that data is going unused,” John Bates, director of product management at Adobe Analytics, told VentureBeat in a phone interview. “They don’t have the human capital to analyze all the data that’s being collected.”

To that end, virtual analyst — which is powered by Adobe Sensei, Adobe’s in-house AI and machine learning framework — will surface insights and patterns that might otherwise slip through the cracks. “The goal is to understand what a user cares about,” Bates said.

“We’re empowering non-data scientists to leverage the power of algorithms in an easy-to-use, visual way,” he explained. “We’re helping you as a marketing analyst … uncover significant changes [and perform] analysis on data you’re most likely to be interested [in].” 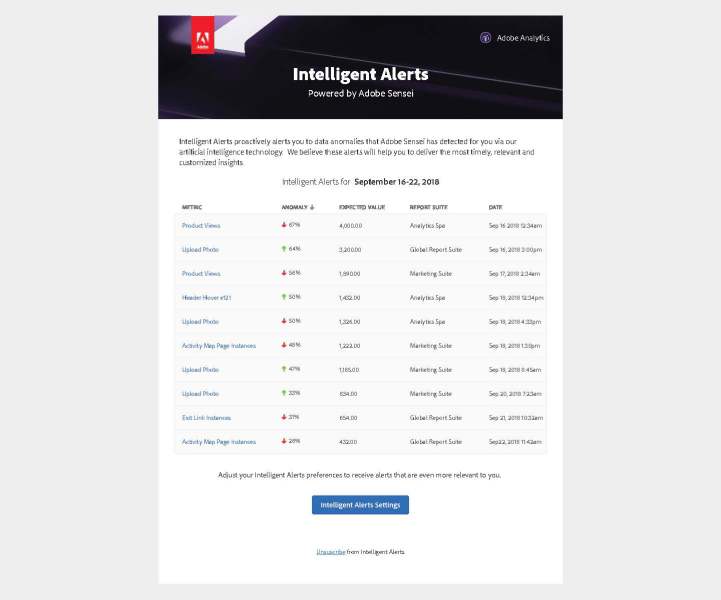 Above: Drilling down into insights delivered by virtual analyst.

Virtual analyst continually sifts through thousands of metrics and tens of millions of leading indicators in company databases, including (but not limited to) how often a customer makes purchases on a website and the frequency with which they switch between apps and the web. It also takes into account both real-time activity and seasonality — it’ll automatically benchmark a spike in sales during a client’s annual sales event against last year’s numbers, for example.

Over time, the virtual analyst will learn users’ preferences and consumption patterns (plus the preferences and consumption patterns of “similar people” within companies) to deliver “more intuitive” insights, Bates said. It’ll automatically de-duplicate recommendations to ensure users don’t get multiple alerts for related events, and its alerts will be at least partly informed by a Facebook-like “like” and “dislike” system that’ll let analysts indicate which insights are relevant to them.

In an early test, virtual analyst helped one of Adobe’s clients identify a competitor perpetrating copyright infringement, Bates said. An unnamed B2B consulting firm received an automated tip within Adobe Analytics that regions in China and Romania were contributing to a 300 percent increase in web traffic. After an audit, it discovered that the aforementioned competitor had built a crawler to scrape the firm’s whitepapers and pass them off as its own.

“That’s way outside the norm for what we typically see,” Bates said. “It’s a use case we could never have imagined.” 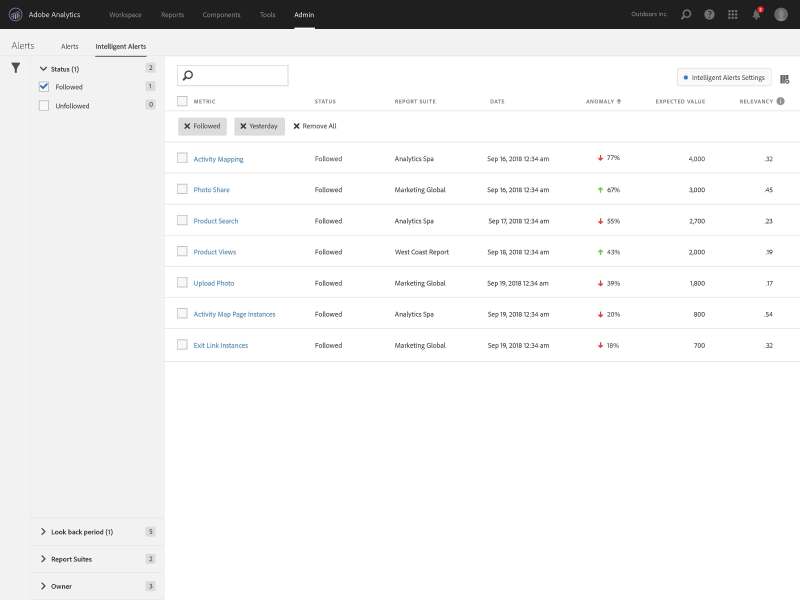 Adobe’s no stranger to automated monitoring and analytics solutions. Late 2015 saw the launch of Analysis Workspace, a cloud dashboard with automated systems (like anomaly detection) that help detect “statistically significant” movements within data. (Adobe claims its contribution analysis tool, which can analyze up to 500,000 unique values, completes in seconds workloads that would typically take a data scientist weeks.) Moreover, in 2016 it launched intelligent alerts within Adobe Analytics, which gave users the ability to manually define triggers.

But Bates said that unlike its previous products, virtual analyst is almost entirely hands-off from a configuration standpoint.

“Alerts are a wonderful way to bring things to individuals’ attention, but they fall short of intelligently focusing on answers to questions users should be asking,” Bates said. “We think virtual analyst resolves one of the key challenges that exist with AI agents: They’re only as smart as the questions you ask them. A major global brand in the early testing program told us the outputs were comparable to adding over 100 data scientists to their team.”

Virtual analyst follows on the heels of upgrades to Campaign, Adobe’s email management software, which added an AI-powered tool that predicts the best time to send a marketing email to a person. In February, Adobe imbued its content and asset management solution Experience Manager with AI smarts, including smart cropping, smart tags that predict and automatically add metadata, and PDF form extraction.