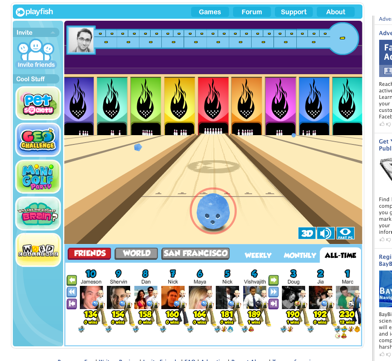 Adobe and Facebook are trying to make it easier for any web developer to build Flash-based games and other applications using Facebook data, by co-releasing a new Actionscript 3 client library. Flash is already used in a wide variety of online video and music players, as well as powering many interactive elements of online games on the web. Up until this point, though, developers have had to figure out how to integrate Flash with Facebook on their own.

So expect to see more features like throwing the bowling ball in Playfish‘s Facebook bowling game application, Bowling Buddies. Playfish and 11 more of the top 20 application developers on Facebook are already using Flash. The new library makes it easier for them — and smaller developers — to add interactive Flash elements together with Facebook social data.

It’s not just a matter of Flash showing up more on Facebook apps, though — many sites using Facebook Connect also use Flash. Facebook and Adobe plan to integrate Facebook features like status updates and note creation with the ActionScript application programming interface on Facebook applications and within Flash-based sites on the web.

The code is free, open source (just the library, not Flash itself) and available for download here.