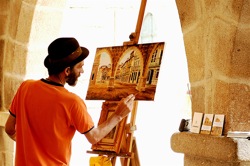 With two new products available in beta testing today — Flash Catalyst and Flash Builder 4 — Adobe is hoping to reinvent the way that websites and applications are built in the Flash format.

Flash sites (which may be most familiar to your average web surfer through the fancy sites that Hollywood studios put up to promote movies) are often the richest in multimedia and graphics, and they also tend to be carefully designed. However, Adobe Platform Product Manager Steven Heintz tells me that the process of designing a site (i.e., creating its look), and especially of communicating that design to the developer who actually builds that site, has some problems. Designers create a set of images, animations, and text instructions, and then a developer has to translate those materials into a real website.

With Flash Catalyst, however, designers can show a developer exactly what they have in mind, because they basically create the websites themselves. They create images in Adobe Photoshop or Adobe Illustrator, then import them into Catalyst, where they become standalone web pages. Then designers can use a fairly simple drag-and-drop interface to build in all the other interactions, like having different buttons light up when moused over, or specifying the transition between two different web pages. When they’re done, they have the equivalent of a basic web application.

After that, a developer can import the Flash file into Flash Builder 4, where they add more technical depth (if necessary), such as connecting the site to databases or other web services. But since they’re working from an already-functional Flash file, rather than a set of instructions, they can focus on the technical backend, rather than trying to interpret the design as well.

By the way, even though it’s numbered “4”, you may not have heard of Flash Builder before. That’s because it was previously called Flex Builer, but Heintz says that name has been causing some confusion about the relationship between Flash and Flex. Now Flash applications are all built using Flash tools (Flash Builder, Flash Catalyst, Flash Pro), and Flex only refers to the development framework. Okay, so that’s still a little confusing — but not as much as it used to be. 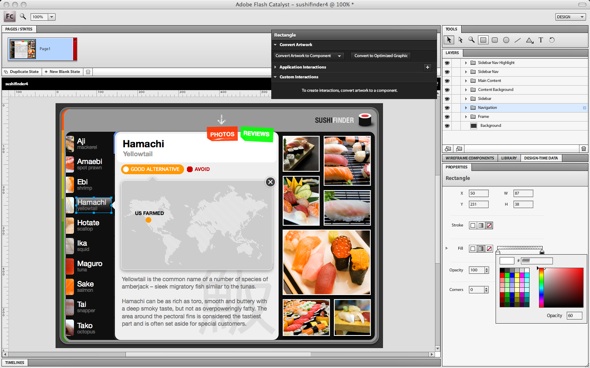