Airtable today announced a mammoth $100 million series C funding round led by Thrive Capital, Benchmark, and Coatue Management, with participation from strategic angels Delphine Arnault, Emily Weiss, Alexa von Tobel, Sarah Smith, and Dan Rose, in addition to existing investors CRV and Caffeinated Capital. It comes on the heels of a $52 million round in March, bringing Airtable’s total haul and valuation to $170 million and $1.1 billion, respectively.

It’s got the momentum to justify it. Airtable’s diverse clientele of 80,000-plus organizations includes Calvin Klein, Outdoor Voices, Insomniac Events, Airbnb, Penguin Random House, Condé Nast Entertainment, The City of Los Angeles, Carnival Cruise Line, WeWork, and half of the Fortune 1,000. And the startup’s on track to rake in ten times the amount of revenue it generated in 2017, which was up 500 percent from 2016.

“There’s a lot of intentionality around how we tried to build the company and business, [and having] an abundance of capital is always an important component in terms of ensuring that we’re strongly positioned for the long term,” Liu, who left Salesforce to head up Airtable as CEO, told VentureBeat in a phone interview. “We never want to have to make decisions because we’re pressured to do so … This round allows us to tackle our pretty ambitious roadmap.” 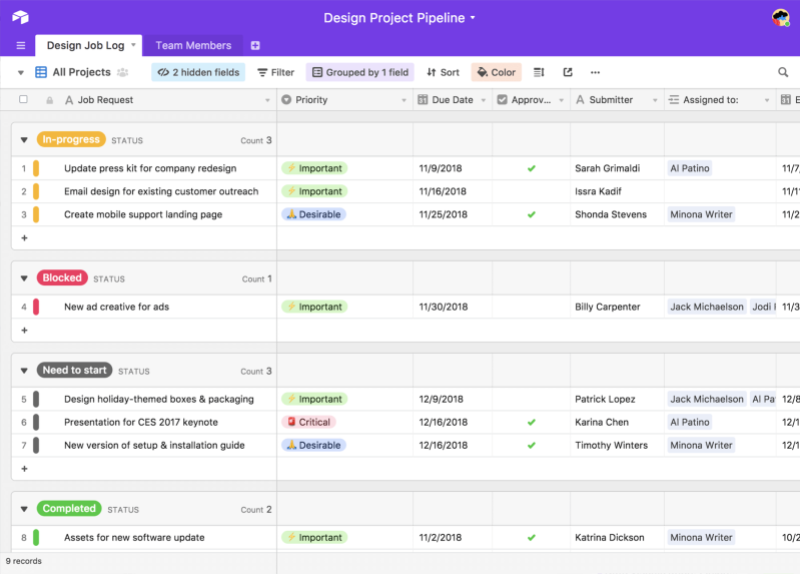 Above: The Airtable interface.

Specifically, the newly raised capital will go toward its internationalization and enterprise efforts. For the better part of “years,” engineers among the company’s 70-strong workforce have focused the bulk of their efforts on its software development kit (SDK), which Liu said sets the stage for an open ecosystem model. In the future, Airtable intends to allow any developer to build, distribute, and even sell applications within the platform.

“[Our platform] enables you to run code as an app developer,” he said. “It’s been a massive undertaking — spelling out UX guidelines, building administrative and granular permissions features, [and] introducing visibility into records … It’s the opposite of an overnight success.”

Airtable’s interface leans heavily on drag-and-drop and one-click gestures — it’s how users add fields and columns in a sheet, and increment or decrement rows. Values update instantly, and built-in sharing tools enable collaborators to work alongside one another in calendar, gallery, and kanban views.

To make onboarding even easier, Airtable comes with a selection of templates grouped into themes (like Event Planning, Real Estate, and Everyday Life), categories (Groups, Clubs, and Hobbies; Book Catalog), and use cases. But perhaps the best thing about Airtable is its wealth of integrations.

In 2015, after raising $3 million and $7.6 million in back-to-back funding rounds, Airtable launched its API, which laid the groundwork for its blocks development framework.

Blocks are a collection of roughly 30-40 “mini-apps” that extend Airtable’s functionality, Liu explained. A number of them are first-party, like the cloud vision block (which uses computer vision to detect objects in pictures automatically), 3D model explorer, color palette picker, countdown timer, CSV and XML importer, and mapping and geocoding blocks. Others, like the recently introduced block for Adobe XD, are third-party.

The unique thing about blocks is that they afford developers a lot of freedom over the user experience, Liu said. He compared them to iOS apps — simple operations that business owners can drop into a system to glean valuable insights.

“Blocks introduces workflows that were not previously possible — not only on the Airtable platform, but on any platform before,” Liu said. “Custom apps that would have, in the past, cost hundreds of thousands of dollars to create and taken months to build … [can] be made in a matter of days by the end users themselves.”

Airtable has plenty of competition from Zoho, Smartsheet, and startups like TablePlus and Retool — not to mention Google’s G Suite and Microsoft’s Office 365. But there’s enough money to go around in the no-code app development market, which is forecast to grow to $27.23 billion by 2022.

“The next frontier of cloud computing is abstracting away from hardware — from hardware servers’ operating complexity,” Liu said. “We’re unlocking the full value proposition of that next layer. For useful software applications within the enterprise, you don’t need to be monkeying around at the code level and building applications as new from scratch. Long-tail apps within the enterprise have a relational data model configured to the needs of a specific use case.”