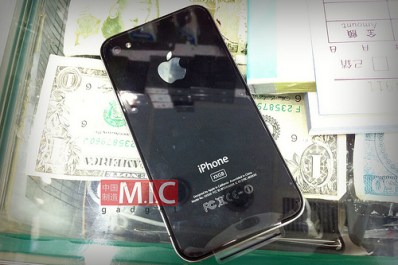 You have to pity Apple. People want to know about its new products so much that having ironclad security around its new prototypes is all but impossible.

Another iPhone 4 prototype has surfaced in China, apparently leaked from a Foxconn factory in Shenzhen. The blog MIC Gadget published photos and videos of the device today, verifying that the device has a 64-gigabyte flash storage capacity.

If it’s legitimate, it seems that Apple is doing what it can to differentiate its phones from the pack of Android followers. Selling a new iPhone 4 with twice the capacity of the former one with no change in price would be a nice bargain that could keep customers loyal.

The blog said that the phone is real and isn’t a hacked version. It has the label “XXGB” on its back. The leak is reminiscent of the lost iPhone 4 prototype that Gizmodo got its hands on nearly a year ago. The device is running iOS version 4.1 (Apple’s mobile operating system is about to get its 4.3 update). And the phone is not locked to a single SIM card.

Beyond the memory upgrade, there don’t seem to be many changes. A few small things: there are no plus or minus signs on the volume buttons. And there’s no silver ring around the camera lens. MIC Gadget said that the owner of the prototype said he got it from a source with a small quantity of the prototypes and they are “definitely leaked from Foxconn’s factory in Shenzhen.”

Foxconn has more than 1 million employees, mostly in factories on huge sprawling campuses in China. It won’t be easy for Apple and Foxconn security to track down the prototype thief. I happen to be watching the documentary Last Train Home about workers in China and I can understand why someone might want to steal a prototype phone in order to get ahead in life. A worker in China could make a year’s worth of salary or more by stealing a phone and selling it to the highest bidder. That’s a very depressing thought.

This prototype offers such a small update with added memory (compared to 16 or 32 gigabytes on current models) that it’s hard to figure why Apple has bothered making such small changes. After all, creating engineering prototypes isn’t a cheap endeavor.