China may be slowing iPhone sales worldwide, but Chinese people are driving Apple’s App Store business. In fact, China accounted for nearly 50 percent of all app downloads in 2018, pushing the global downloads count to reach a record 194 billion, according to research firm App Annie.

China, which is the world’s largest smartphone market, also accounted for nearly 40 percent of worldwide consumer spend in apps in 2018, App Annie said in its yearly “State of Mobile” report. (Note: Google Play Store is not available in China.) Global consumer spend in apps reached $101 billion last year, up 75 percent since 2016. And 74 percent of all money spent on apps last year came from games.

Despite a slowdown from the game license freeze in China, the world’s most populous nation was one of the biggest highlights in App Annie’s report. The yearly report, for which the firm sources data from Apple’s App Store, Google’s Play Store, and other Android stores, has become an industry standard and helps track movements in various markets. 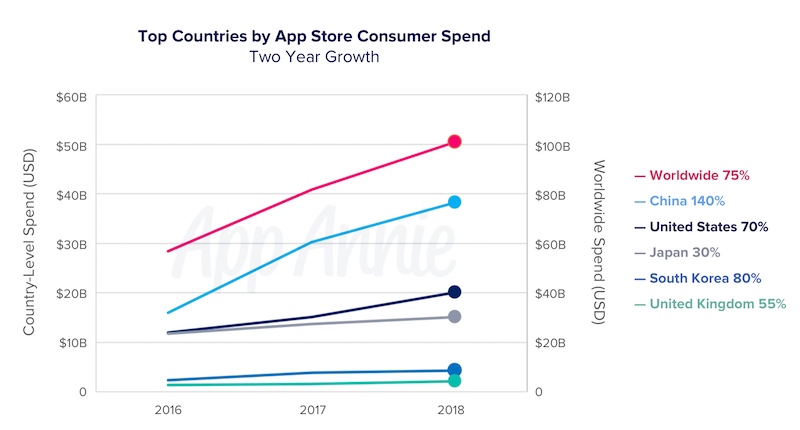 The battle between Silicon Valley companies and Chinese tech giants generated more than half of total consumer spend in the top 300 parent companies in 2018, the report said. The top company for global consumer spend was China’s Tencent, which owns stake in several startups, companies, and games — including last year’s sleeper hits PUBG and Fortnite. Overall consumer spend in games in China has reached between $25 billion and $30 billion, growing at 105 percent since 2016.

Globally, people spent 18 billion hours in shopping apps in 2018, up 45 percent since 2016. According to the report, November of last year was the biggest mobile shopping month in history. People in China browsed between 7 times and 11 times more sessions than those in India and the U.S. (If you remember, Alibaba’s Singles’ Day alone brought in $30.8 billion in 24 hours on November 11 last year.)

The report also outlined how people are interacting with their phones. Overall, users across the globe were glued to apps for three hours each day last year. In certain emerging markets, such as Indonesia and Thailand, people spent as many as four hours consuming various apps, the report said.

“Daily time spent on mobile is fueled in part by cumulative micro-moments — periodic sessions throughout the day where consumers check their emails, browser news articles, or check their banking,” the report said.

And the yearly reminder: Delete any apps that you do not use. In the U.S., Japan, South Korea, and Australia, people had over 100 apps installed on their phones. In comparison, an average user in China and India had between 50 and 60 apps on their handsets. Regardless of the market, people never actively use a large number of these apps, App Annie said.

India, which is the fastest-growing smartphone market, topped the chart in social and communication apps, food and drink apps, travel and navigation apps, and finance apps.

One success that stands out in the report is YouTube. The Google-owned video service was the top app globally — except in China — by time spent among video streaming services. (Also read: Netflix’s biggest competition isn’t sleep — It’s YouTube.) In China, where YouTube is banned, Tencent Video, iQiyi, and Youku topped the chart.

YouTube, which offers much of its service for free, is also beginning to get people to pay. In the U.S., Canada, and the U.K., it was only second to Netflix in consumer spend. Netflix remains the top app worldwide in consumer spend, across all categories. YouTube is seventh on that list.