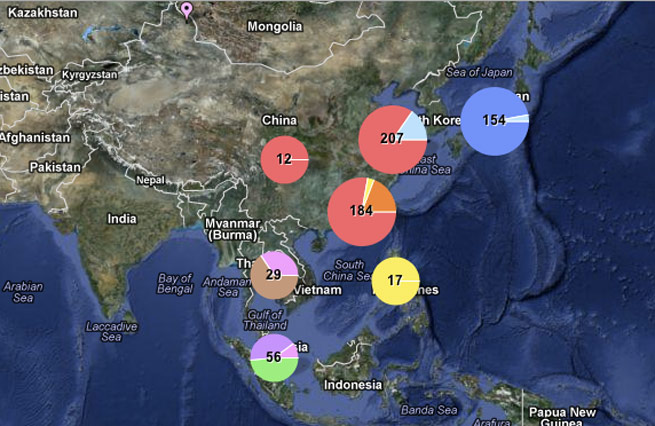 Last month, Apple released a list of its 748 suppliers. According to a new data visualization by ChinaFile, more than 600 of them are in Asia, and more than half of those are in China.

That’s not surprising: we know Apple sources a lot of product — in fact almost all of its products — from Asia, where the company has had significant challenges with suppliers maintaining legal and ethical labor standards, in spite of efforts by CEO Tim Cook and others to improve working conditions.

But it is interesting to see the breakdown. Here’s a partial list of the countries Apple sources product from:

A bit expensive for a stunt, perhaps.

That manufacturing appears to be for Apple’s desktop lineup of iMacs, a product category that makes up a tiny fraction of its overall $55 billion in sales last quarter. In contrast, iPhone, iPad, and iPod account for over three quarters of Apple’ revenue — 76 percent, in fact.

But it does represent a start. And one that American workers probably would appreciate.