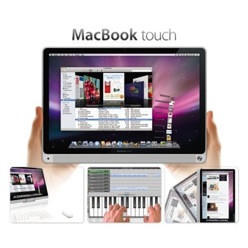 A lot of companies file patents for products they are never going to make. Apple is no exception. But given how many it has filed the past few years for advanced multi-touch technology and devices, it’d be very surprising if a multi-touch-enabled tablet device isn’t coming from the company at some point in the near future.

The latest patent filing, uncovered by AppleInsider, is one of the most in-depth yet, showing a maturity in the project that may or may not be a product that has been affectionately dubbed by the press the “MacBook Touch.”

The key to this device is that it appears to run a full version of Apple’s OS X operating system. Obviously, that presents problems as the interface was built for use with a keyboard and mouse. For example, it’s hard to imagine hitting the “close,” “minimize” and “maximize” buttons on a web browser since they are much smaller than human fingers. But Apple has solutions for this, zooming into area with small buttons when you touch them. This is likely similar to what it does with its keyboard on the iPhone.

Even sexier, patent images show this device having a full-size keyboard. And it also works like one. Thanks to multi-touch, you’d be able to hold down the shift key and hit a letter with another finger to capitalize it.

Though it’s not mentioned, to me the key to a successful full-sized multi-touch keyboard is tactile or haptic feedback. That is a small sensory feedback on your fingers so you are able to orient where you are on the keyboard. There has been talk about this technology coming to the iPhone, and it would likely help mute some of the complaints users have about the device not having a physical keyboard. Several companies such as Senseg and Immersion are working on this technology. In fact, it’s been rumored that Apple has licensed Immersion’s technology.

But the real beauty of having a full multi-touch screen as your input device is that you’re not limited to using something like a keyboard. Finger swipes, virtual scroll wheels and device rotations are all mentioned as ways to interact with the device. Imagine swiping a finger across the screen backward and forward to go through your iTunes albums, tapping to select the one you want just as you do on the iPhone. Imagine doing the same thing for documents and web pages.

Imagine full picture manipulation using your hands. A whole new level of gaming. Manipulating Google Earth with your hands. The possibilities are endless.

The mouse and keyboard have been standards for input on computers for decades, but when you think about it, it’s actually quite an odd way to interact with a machine with a graphical user interface. Why not just touch it?

I’ve long been excited about the prospects of multi-touch invading all aspects of computing. Apple is hardly the only one working in the field. Its arch-rival Microsoft is arguably ahead of it right now with its Surface computing tables. The company also unveiled back in May that multi-touch would be a part of the next Windows operating system.

Whether the MacBook Touch is a part of Apple’s plans for this year or next, I think all of these patents make it clear that multi-touch is a big part of their plans going forward. The iPhone was just the beginning.

[The image at the top is a mock-up of what a MacBook Touch could look like. Patent images via AppleInsider.]