Aqua Security today announced that it raised $135 million in series E funding at a post-money valuation exceeding $1 billion. The Boston- and Tel Aviv-based company plans to put the proceeds toward broadening its product portfolio and its geographic footprint.

Containers, the packages of code and dependencies that run across computing environments, are riding a worldwide wave in popularity. According to a recent study from Nemertes, 45% of enterprises used containers by the end of 2018 compared with 21% in 2017. Meanwhile, Grand View Research reports that by 2025, the industry might reach $8.2 billion.

CTO Amir Jerbi and CEO David Davidoff, who cofounded Aqua in 2015, aim to corner the cybersecurity portion of the container market. Aqua’s container-based app management platform runs on-premises or in the cloud and ensures that containers remain immutable, preventing changes versus their originating images.

Despite the increased risk ushered in by the pandemic-related uptick in remote work, containerized software security practices remain uneven in the enterprise, surveys show. According to a 2019 Veritis report, 34% of respondents had no container security strategy or were still in the planning stages. Most saw user-originated misconfi­gurations, exposed dashboards, and potentially compromised metadata as their biggest challenges.

Aqua aims to address this with a console from which multi-team, multi-customer environments can be managed either together or in isolation. The platform supports Active Directory and LDAP for permissions configuration and single sign-on and offers prebuilt integrations for third-party productivity and analytics tools. Vulnerability data, alerts, and audit events are logged in real time. And Aqua integrates with third-party secrets vaults, delivering encrypted tokens and private keys to containers at runtime and loading them in memory so they’re visible only to the containers that require them. 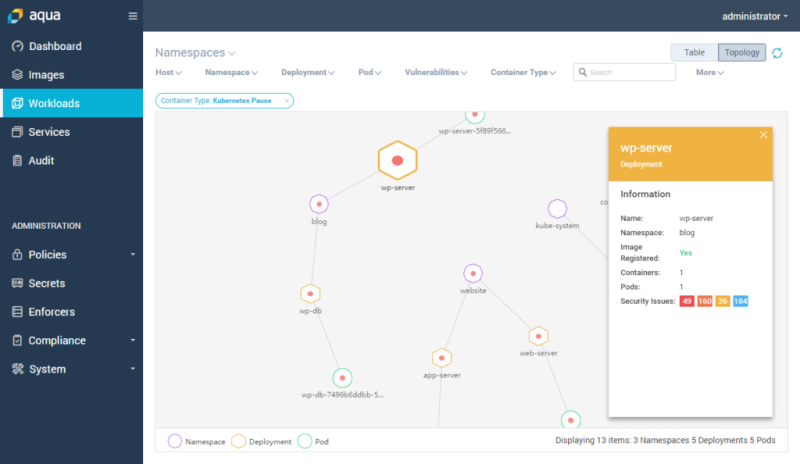 Aqua’s runtime protection service, which secures apps predeployment through a command-line interface that orchestrates automated validation testing, leveraging a stream of vendor advisories and other sources. It scans up to thousands of images nodes for vulnerabilities, embedded secrets, configuration and permission issues, and malware. It affords admins the ability to monitor and control container activity based on custom policies and machine-learned behavioral profiles and to block activities and processes or limit container networking based on app contexts auto-detected by Aqua’s firewall configuration utility.

Aqua’s competitors include Sysdig and Tigera, which recently raised $68.5 million and $30 million, respectively. There’s also Docker, the San Francisco startup behind the ubiquitous container toolkit of the same name. Among others are Twistlock, Capsule8, NeuVector, StackRox, Layered Insight, and Tenable.

But Aqua’s $265 million war chest sets it apart from many of the rest, as does its impressive customer momentum. In 2020, the company doubled the number of paying clients and claims it now protects several of the world’s largest container production environments. Aqua also says that as of March 2021, it has half a dozen customers with an annual recurring revenue of over $1 million.

New product launches are responsible in part for the growth. This past year, Aqua launched Aqua Wave, a software-as-a-service offering that works to secure apps as they’re built and the infrastructure they’re deployed on. The company also launched Aqua Enterprise, a version of Aqua’s enterprise offering that runs on top of its existing self-hosted version, with added capabilities for securing workloads at runtime.