Language-learning startup Babbel has raised $22 million to help expedite product development and expansion across the Americas.

Today’s announcement takes the company’s total known funding past the $30 million mark, including $10 million raised in 2013, though it did raise a “significant” undisclosed amount way back in 2008. The latest round was led by new investor Scottish Equity Partners (SEP), with contributions from existing investors including Reed Elsevier Ventures and Nokia Growth Partners (NGP). 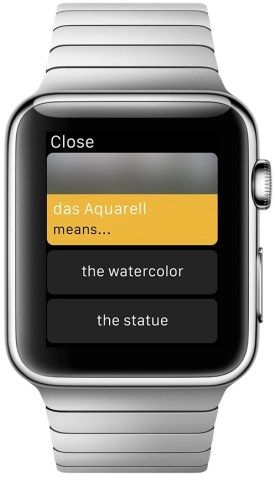 Above: Babbel for Apple Watch

Launched in 2007 by Germany-based Lesson Nine GmbH, Babbel has emerged as one of the leading brands in the online language-learning fraternity, with mobile apps and a website covering 14 tongues including English, Spanish, French, Italian, Turkish, Polish, and Russian. Babbel claims it now sees 120,000 downloads each day, and to help boost uptake it recently launched a version for Apple Watch.

Babbel offers a number of tools for language-learners, from beginner to advanced, including speech-recognition to aid pronunciation, vocabulary training, and listening and writing exercises. Subscriptions range from $13/month per language when paid monthly, down to $7/month when charged annually. The company claims it has been profitable since 2011, which is undoubtedly an appealing factor for would-be investors.

2015 has been a big year for Babbel, which opened its first office in the U.S. back in January. Today, the company claims 350 employees across its offices in Berlin and New York, and with $22 million more in the coffers, this should go some way toward growing its footprint in the U.S. and beyond.

“Babbel sets the standard for online language learning, and its strong international footprint is a reflection of that,” explains SEP partner Stuart Paterson, who also now joins Babbel’s board of directors. “We see significant growth potential in this market and are delighted to support the company as it executes its expansion in the Americas.”