For advertisers, ad-blocking software is an annoyance. For IT administrators, it might just be the key to reducing network congestion.

A recent study (.pdf) by Simon Fraser University in British Columbia has found that installing ad-blocking software reduces ordinary Web-browsing bandwidth usage by 25 percent. The reduction is even more dramatic for streaming video: blocking the ads cuts bandwidth by 40 percent.

The researchers behind the study used Adblock Plus, an ad-blocking extension that’s widely available for free. Significantly, Adblock Plus recently introduced a mass-install option for IT admins, letting them deploy the Chrome extension across all of the computers under their purview, without disturbing the people using those computers.

The Simon Fraser study had a fairly small, almost simplistic methodology: Six computers were set up on a single network, with three running Adblock Plus and three without it. Network analysis tools measured the bandwidth used by each computer as volunteer students browsed through a defined set of websites, spending 5-10 minutes on each one, simulating student research as well as ordinary browsing behavior.

When the tests were done, the researchers tallied the download totals for each set of computers and compared those with adblocking software against those without it.

Adblock Plus helped pay for the study, providing $8,500 to offset server and networking equipment costs. The research was self-published by the university. 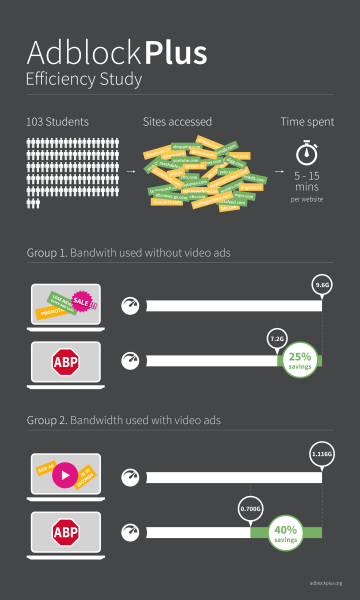 Above: A study by Simon Fraser University, supported by Adblock Plus, shows that Adblock Plus reduces network usage.