“Our rapid pace of change over the last 18 months reflects our industry as a whole: software development is increasingly complex, fragmented, and difficult to map. CircleCI is in the unique position to help engineering organizations write better software and deliver value faster,” said Rose. “Our product strategy combines an agnostic, build anything, anywhere roadmap with a deep focus on lifting business value delivery of software everywhere.”

CircleCI — which was cofounded in 2011 by Allen Rohner and Paul Biggar and which counts among its customers Facebook, Coinbase, Sony, Kickstarter, GoPro, Spotify, Segment, and Percolate — develops a tool set that integrates with Bitbucket and GitHub to create builds the minute code is committed. It automatically tests those builds in containers or virtual machine and notifies teams if issues arise, and it deploys passing builds to target environments such as Docker images or virtual Linux, Android, or macOS machines.

Dev teams can define and orchestrate how execution runs and take advantage of Docker support to build images from registries. Moreover, they’re able to specify required compute and memory resources and tap caching options to speed up builds with save and restore points.

CircleCI’s SSH support lets managers or dev team members run jobs in local environments, and its security tools — which include LDAP for user management, audit logging, and full-level virtual machine isolation — shields code from illicit tampering. On the analytics side of things, an interactive visual dashboard collates metrics in one place, including the number of failed builds and the slowest tests. 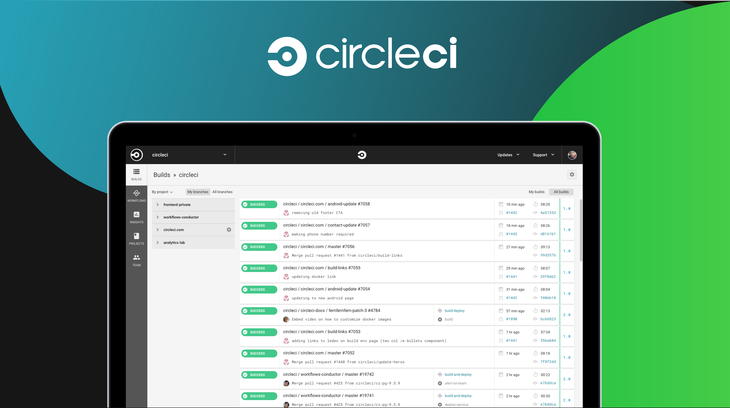 CircleCI’s platform can be installed on a private server, and the company offers a managed cloud service that includes instant access to feature releases and automatic upgrades. No matter where it’s installed, CircleCI supports any language that builds on Linux or macOS, including C++, Javascript, .NET, PHP, Python, and Ruby.

“Every company today relies on software to continuously improve its products and business in order to keep up with consumers’ evolving needs and expectations,” said CircleCI chief technical officer Rob Zuber. “We believe humans should never have to wait on machines. This new round of funding will better allow us to provide developers flexibility and control to power their workflows seamlessly.”

It’s been a banner few years for CircleCI, which recorded an increase in the number of monthly jobs on its platform from 7 million to more than 30 million. CircleCI recently expanded its technology partner program (CircleCI Orbs) to 800 integrations across 45 partners (including Azure, Fastlane, and Slack) ahead of the launch of its v2 API, and it opened its first international office in Tokyo along with hubs in Boston and Denver. (Orbs, which launched eight months ago, allows teams and devs to share preferred configurations by packaging commands, executors, and jobs into lines of code.)

In other news, CircleCI brought aboard 75 new employees in the first six months of 2019, with projections to have a total of 300 by 2020. And it added to its C-suite with the promotions of Chitra Balasubramanian to chief financial officer, Jane Kim to chief revenue officer, and Erich Ziegler to chief marketing officer.

CircleCI says it’s already running Windows jobs for customers in addition to Linux, Docker, and macOS, and says that it intends to support additional git providers in the future (such as GitLab). It’s also testing a new user interface and improving its onboarding process, and it says it plans to preview a new usage-based pricing model that’ll gives teams per-job control over resource classes.

“When evaluating companies for investment, one quality I look for is how quickly a company can deliver value to the market,” said Scale Venture Partners partner Andy Vitus. “Scale led CircleCI’s Series B in 2016, and since then I’ve seen the company prove how effectively it improves developer throughput and velocity. We believe CircleCI is the DevOps standard for companies looking to accelerate their delivery pipeline while increasing quality.”