Cloudflare has announced its first ever acquisition involving a company built on its own Cloudflare Workers platform. The web infrastructure and security giant, which is perhaps best known for its content delivery network (CDN) and distributed denial of service (DDoS) mitigation technologies, has snapped up Zaraz, a fledgling startup that promises to speed up website performance with a single line of code.

While these third-party tools are often vital to a company’s bottom line, they can significantly impact a website’s performance — the more scripts a company adds to its website codebase, the bigger the impact. And this is where Zaraz helps, by identifying all the third-party tools running under the hood (e.g., Mixpanel or Google Analytics) and then loading them on its own backend infrastructure (i.e., server-side). This negates the end-user’s browser from having to execute what could be dozens of scripts, thus slowing down their entire experience on that website. 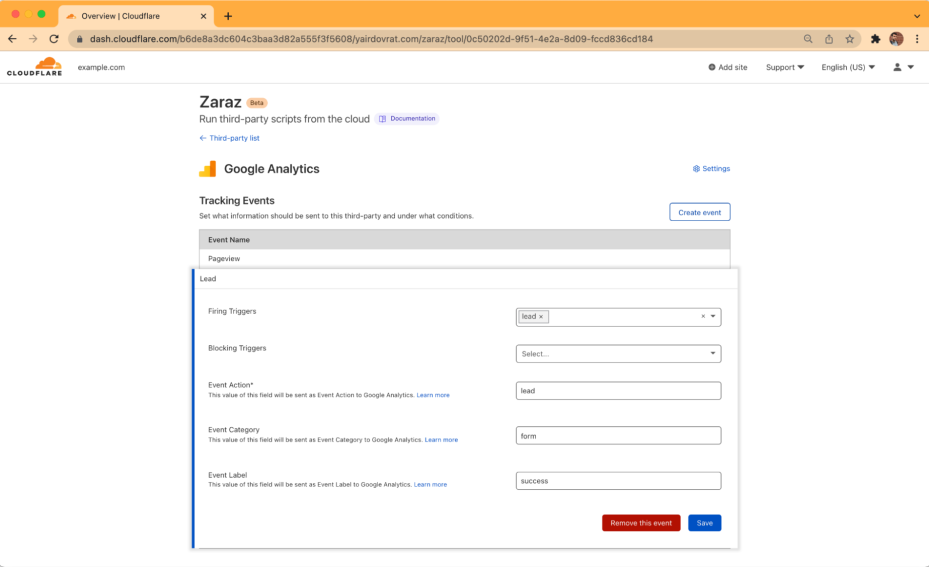 Post-acquisition, Zaraz will be folded into Cloudflare and offered as a standalone product called Cloudflare Zaraz — a free version will also be made available, initially in beta. “This means Cloudflare customers will be able to simply toggle on the solution on their dashboard, and it will immediately work on their website, no coding involved,” Zaraz cofounder and CEO Yair Dovrat told VentureBeat.

So while Zaraz was already pitched as an easy-to-deploy tool that only required a single line of code, now that it will be bundled into Cloudflare, users won’t have to alter any code whatsoever — customers just click the Zaraz icon in their dashboard to configure all their third-party integrations.

“If a website’s domain is managed by Cloudflare, we can include the Zaraz script directly in the page’s HTML automatically,” Dovrat added.” 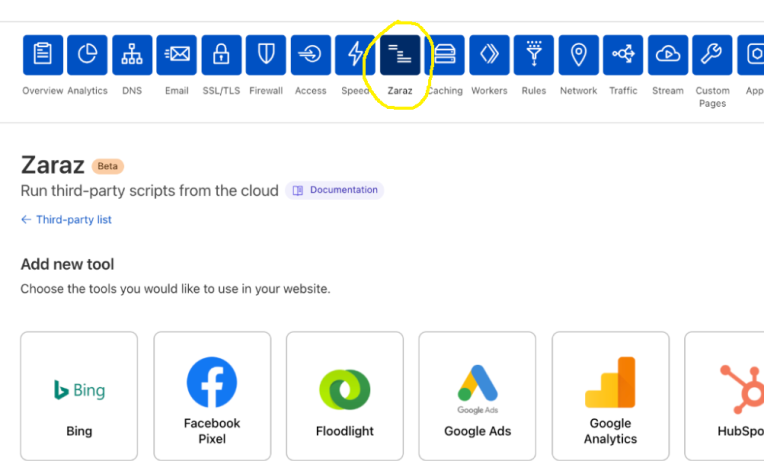 Above: The Zaraz icon in Cloudflare

While Cloudflare has acquired a handful of companies in its 12-year history, Zaraz is particularly notable given that it’s built on Cloudflare’s own developer platform.

Cloudflare launched its Workers serverless app platform back in 2018, enabling developers to deploy code and run their apps instantly in any region around the world using Cloudflare’s fleet of datacenters. Website traffic is automatically routed and load-balanced, with companies paying only for the resources they consume. This is a core selling point behind Zaraz — it not only enables websites to load third-party integrations in the cloud, but also uses Cloudflare’s global infrastructure to ensure millisecond latency wherever the web traffic hails from.

“We couldn’t have built Zaraz without the global scale, speed, and flexibility provided by Cloudflare Workers,” Dovrat said. “Using Workers meant that we were able to optimize Zaraz for performance and security, something traditional tag managers couldn’t do.”

Zaraz inhabits a space that includes tag-management tools such as Google’s Tag Manager, which marketers can use for free to manage and deploy marketing tags on websites or apps. However, most of the alternative solutions out there still evaluate and load the third-party tools in the browser. Zaraz, on the other hand, handles as much as is possible in the cloud, promising to make websites as much as 40% faster, while its serverless architecture means that it merely acts as a data pipeline — customers can save their data wherever they like, including on-premises (though this is limited to enterprise accounts).

Founded back in 2019, Zaraz emerged from stealth back in February after an extended beta period, with the Y Combinator (YC) graduate also nabbing $2 million in seed funding from YC, Twitch cofounder Kevin Lin, Pico Partners, and Stormbreaker VC.