For almost a year, Cloudkick has been offering tools that help web startups and developers manage their applications on cloud infrastructure like Amazon’s Elastic Compute Cloud. Now it’s finally ready to start making money from those services.

The San Francisco company’s existing features — including a dashboard with an overview of your cloud infrastructure, email alerts, and graphs that you help you visualize data like bandwidth requirements — will always be free, said co-founder and chief executive Alex Polvi. But Cloudkick wants to charge for features on top of the basic service, such as SMS alerts when your app has problems and a change-log tool where sysadmins can communicate with each other, which Polvi described as “Twitter for servers.”

“We’re calling [the core product] our developer plan,” Polvi said. “That way there’s a lower barrier to entry and we can help some folks out in managing their applications. Then if you’re a business actively using it and you can depend on our servers, you can pay for the commercial version.”

There are already “thousands” of developers and companies using Cloudkick services, including location-based mobile application Foursquare, simple-blogging service Posterous, and Urban Airship, which helps developers add iPhone features like push notification. Besides, its simplicity, Polvi also touts Cloudkick’s support for seven different cloud providers: Amazon, Rackspace, Linode, GoGrid, Slicehost, RimuHosting, and VPS.NET. Not only can you run your application on the provider of your choice, but you can also manage applications on multiple clouds through a single interface using Cloudkick.

The company is also working on an open source project called libcloud that helps developers build applications that run on multiple platforms. Cloudkick has even added a provider directory, allowing developers to compare the pricing and features from each cloud provider.

Pricing for Cloudkick ranges from $99 a month to $599 a month, with the option for bigger companies to go higher if they want custom services.

Cloudkick was incubated by Y Combinator and raised $750,000 from Avalon Ventures and Nueva Ventures in September. Competitors include RightScale. 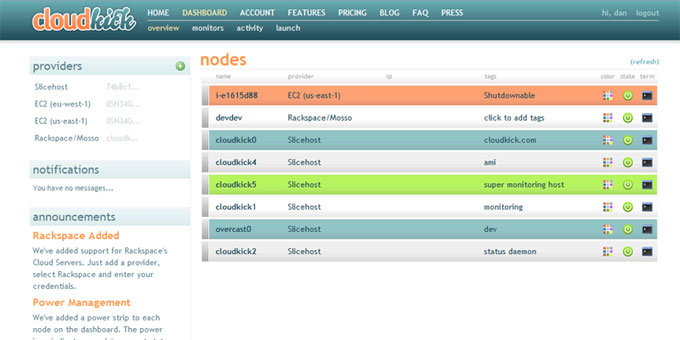