Imagine if your neighborhood grocery or convenience store offered one-hour, on-demand fulfillment — not through intermediaries like Postmates or Instacart, but entirely in-house — and made a profit on every order. As fantastical as the idea might seem, that’s the promise of CommonSense Robotics, an Israeli micro-fulfillment startup that today launched its first autonomous sorting and shipping center in downtown Tel Aviv.

“We started CommonSense Robotics because as consumers we wondered: Why can’t we get our online orders faster and cheaper than going to the store? We’re excited to see this groundbreaking technology finally serving real customers to allow for fast, inexpensive deliveries of high-quality products,” said Elram Goren, CEO and cofounder of CommonSense Robotics, adding, “It’s a true win-win for both retailers and consumers.”

CommonSense’s fulfillment center — which it claims is the world’s smallest — measures just 6,000 square feet in total. That’s a twelfth the size of Apple’s 5th Avenue store in New York City, Goren said, and substantially smaller than most hubs, some of which have floor plans exceeding 120,000 square feet. (For the sake of comparison, Amazon recently broke ground on a 2 million-square-foot fulfillment center in Birmingham, Alabama.)

The facility’s small footprint allowed it to squeeze into an underutilized real estate development previously considered too constrictive for warehouse infrastructure. But its size belies its efficiency, Goren said; thanks to a combination of robotic sorting systems and artificially intelligent (AI) software, it can prepare orders faster than the average team of human workers — typically in less than three minutes. 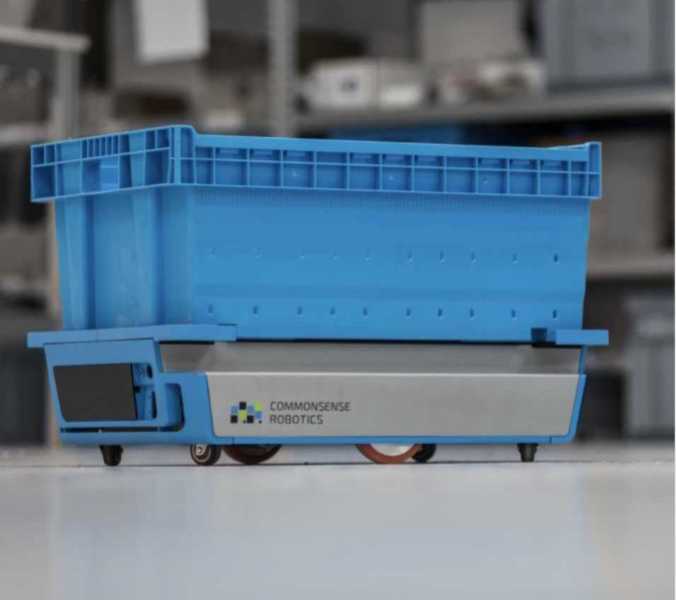 “A mid-sized grocer has 20,000 different SKUs, and some have upwards of 50,000,” he told VentureBeat in a phone interview. “When you’re dealing with a rural area without much density, those products move pretty easily. But it’s a completely different scenario in dense urban environments.”

CommonSense takes a hybrid approach to fulfillment. Robots within the center’s walls — overseen by AI that breaks orders down into tasks and autonomously delegates those tasks — bring items awaiting shipment in totes to teams of employees, who pack individual orders. Other robots move packaged orders to dispatch, where they’re loaded onto a scooter or van.

CommonSense owns and operates the Tel Aviv center and charges retailers a fee per order.

“I don’t see us as a robotics company. I see us as a software-driven company that uses robots to solve physical problems,” Goren said.

“Staying competitive in today’s market is anchored by delivering orders quickly and determining how to fulfill and deliver orders efficiently, which are always the most complex aspects of any ecommerce operation. With robotics, we will be able to fulfill and deliver orders in under one hour, all while saving costs on said fulfillment and delivery,” said Super-Pharm VP Yossi Cohen. “Before CommonSense Robotics, we offered our customers next-day home delivery. With this partnership, we are now able to offer our customers same-day delivery and will very soon be offering them one-hour delivery.”

CommonSense, which raised $20 million in a funding round led by Playground Global earlier this year, has its sights set on international expansion. It’s in talks with a number of large grocery retailers in the U.S. and U.K. and intends to launch “multiple sites” across the East Coast early next year, Goren said.

Of course, it’s far from the only firm bringing micro-fulfilment tech to retail.

Takeoff Technologies‘ platform, which works out of pharmacies, convenience stores, and quick-service restaurants, doubles as a pick-up station, complete with lockers for easy access. Commerce giant Walmart, meanwhile, partnered with Alert Innovation in August to deploy AlphaBot, an autonomous fulfillment system capable of picking and transporting the “vast majority” of grocery items.

That’s not to mention the more than half-dozen startups deploying robots in store aisles. California company InVia Robotics raised $20 million this summer to bring subscription-based robotics to ecommerce warehouses. In the U.K., supermarket chain Ocado recently took the wraps off of a picking and packing robot that can grasp fragile objects without breaking them. And French startup Exotec’s AI system — Skypod— taps robots capable of moving in three dimensions.

Suffice it to say, the competition is fierce.