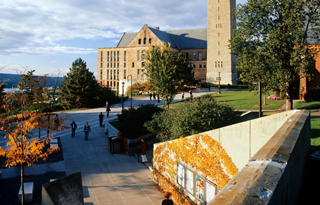 Cornell University is erecting a massive, important new science and engineering campus on New York’s Roosevelt Island, just half a bridge away from Manhattan in the middle of the East River.

The two million-square-foot campus will cost $2 billion to build, with around $100 million of capital coming from the city of New York. The full, permanent campus is expected to house as many as 2,500 students and almost 280 faculty, and won’t be completed for 30 years. However, classes will begin at another location off of Roosevelt Island in 2012, and the first phase of permanent construction on Roosevelt Island is scheduled to be completed by 2017.

“New York City’s goal of becoming the global leader in technological innovation is now within sight,” said New York City Mayor Michael Bloomberg in a release today. “By adding a new state-of-the-art institution to our landscape, we will educate tomorrow’s entrepreneurs and create the jobs of the future. This partnership has so much promise because we share the same goal: to make New York City home to the world’s most talented workforce.”

The campus is expected to bring tens of thousands of jobs to Roosevelt Island, which is only 0.23-square-miles in size.

The city’s Applied Sciences NYC initiative received bids from a range of institutions that wanted to build a world-class technology campus in New York City. Cornell partnered with Technion – Israel Institute of Technology to make its strong bid for the city’s partnership and funding.

Cornell and Technion were competing against Columbia University, Carnegie Mellon University, New York University and (until a few days ago) Stanford University. In winning the bid to build the campus, Cornell and Technion are now charged with reclaiming the East Coast’s long history of technological innovation, and keeping pace with the rapid growth seen in California’s Silicon Valley.

To encourage innovation and keep innovative companies in the NYC-area, the school will offer many resources for startups, including legal help, business competitions, an entrepreneur-in-residence program and pre-seed financing for research. To sweeten the pot, the school is creating a $150 million fund for startups that start at the school and stick around New York City for at least three years.

In today’s announcement, a Cornell rep says the Cornell and Technion bid was chosen “due to the large scale and vision of their proposal, the long and impressive track-record of both institutions in generating applied science breakthroughs and spinning out new businesses, the financing capacity of the consortium, the focus of the consortium on the collaboration between academia and the private sector and the overall capacity of the partnership to execute the project.”

In addition to the $100 million of city money, Cornell will be using a recently received $350 million gift from an anonymous donor to fund the new campus. Cornell and Technion have signed a 99-year lease for the Roosevelt Island campus site, at the end of which the consortium can purchase the land for $1.