Personal computer hardware is not a segment of the tech industry where you’d expect to encounter any innovation. That’s why cell phone startups are far more plentiful than PC startups. But a new Silicon Valley company has taught the old dog a new trick with a clever and inexpensive add-on technology.

Santa Clara, Calif.-based CrestaTech is announcing today that it has designed a way to enable PCs to become region-free broadcast televisions, navigation devices and other kinds of radios, all with a minimal amount of new hardware. You can use this technology to turn your laptop into a portable digital TV capable of receiving 31 different types of signals at little extra cost — and it can provide a bunch of other functions as well. It calls the solution the CrestaTV Universal Broadband Receiver and is showing it off this week at the International Consumer Electronics Show. 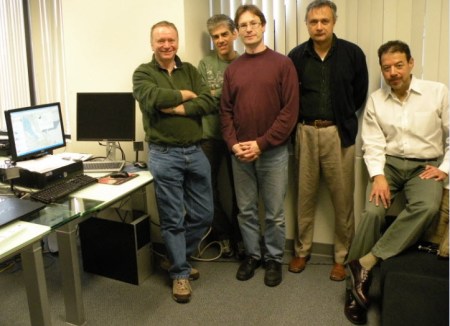 The company has designed a radio chip that can be attached to a computer via a USB (universal serial bus) drive. That radio chip brings the right signals into the computer. But CrestaTech’s software relies upon the computer’s own processor to transform the machine into a flexible radio receiver. The laptop can thus become a live broadcast TV receiver, an AM/FM radio, or a global positioning system (GPS) device. Among other things, the software will let Facebook and MySpace members chat live while they watch their favorite TV shows.

It can thus be used to give computers new multitasking capabilities without much added cost. Normally, it might cost anywhere from $50 to $200 to add new hardware to a machine that has as many capabilities as a CrestaTech-enabled computer. 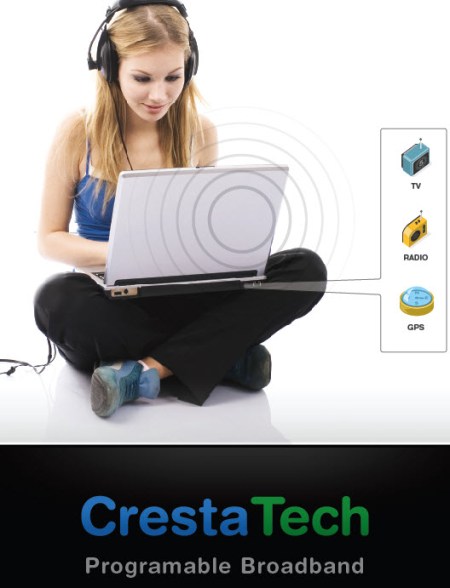 The company is the brainchild of George Haber (above, left), a serial entrepreneur who has had a string of chip startups. I’ve known Haber, a Romanian immigrant whose mother was an Auschwitz survivor, for more than a decade. He is one of Silicon Valley’s many rags-to-riches stories, having headed startups CompCore Multimedia, Gigapixel, Mobilygen, Interact, and (as chairman) LucidLogix Technologies.

Not all of these enterprises cashed in big. Gigapixel almost snared a deal to create graphics chips for the original Xbox, but Nvidia won the deal at the last second — and Gigapixel soon had to sell out to Nvidia. But there was no denying that Haber was always swinging for the fences.

Haber and his partner Mihai Murgulescu started CrestaTech company in 2005. They received $1.5 million in seed money from Sun Microsystems co-founder Andy Bechtolsheim in 2006 (Haber was employee No. 100 at Sun). In 2007, the company engineered a low-power satellite receiver chip for XM Satellite Radio and Marvell Technology Group. That technology is now allowing the satellite company to field a radio that can combine signals from both an XM Satellite Radio signal or a Sirius Satellite Radio signal. That’s an important innovation, since the two companies have now merged their satellite radio services as Sirius XM Radio.

Later, Haber’s team realized that there was great value in creating a programmable radio tuner. Earlier this year, CrestaTech received $5 million in funding from Sofinnova Venture Partners and Bechtolsheim. It has been working on the technology that Haber calls “universal broadband reception” — the ability to use a general-purpose PC processor to handle TV, radio and GPS signals simultaneously. It is similar in purpose, but not design, to the “software-defined radio” being used by Sandbridge Technologies to create inexpensive universal cell phones that can receive calls in any country.

“We believe there is no reason why the same hardware can’t function as both a TV or a PC,” Haber said. “Today, we make the living room TV into something you can take with you on the go in a computer that you are already carrying.”

The CrestaTech invention is an expression of what Haber unabashedly calls “Haber’s law”: if it can be done in software, it will. That is, over time, tasks that were once done with custom hardware can be done with software running on a general-purpose processor.

Consider video encoders as an example. In the 1990s, C-Cube Microsystems built video encoders consisting of 13 custom-designed video processing chips. Over time, as chips became more powerful, the same tasks could be done with software running on a computer’s microprocessor.

Haber used the same kind of trick years ago with the personal computer. His first startup, CompCore Multimedia, created software that enabled a computer to run movies based on the older MPEG-1 (motion picture experts group) video standard. Zoran eventually bought the startup and built a big business on CompCore’s technology, which initated the combination of the TV and the PC. Now Haber is executing on the next logical development in PC-TV convergence.

With CrestaTech’s low-cost solution running on a multi-core processor that is common in most computers today, the PC can become a lot smarter. A laptop with a USB drive could, for instance, become aware of its precise location through GPS signals. It could also tune into a TV signal, analog or digital, anywhere in the world. It could receive national digital TV signals or local stations, scanning the entire region in just three seconds compared to as many as 30 minutes for competing technologies.

Using the GPS signal, the computer could figure out quickly which stations are within range, allowing users to conveniently tune to stations by clicking on icons that appear on a Google Map application. Haber calls this model CrestaTV.

The radio chip will likely cost under $10, Haber said, and operate on half a watt of power. Technically speaking, the CTC-200 Universal Broadband Receiver solution consists of a tuner, demodulator, decoder, and bus technology that allows a PC to receive a signal and transform it into an image on the monitor. The radio chip will compete with products made by big chip makers NXP, Micronas and Conexant.

The company will release engineering samples of its product in the second quarter, and it expects its customers will see products on the market as early as late this year. The company is doing demonstrations of the technology — which I saw at its Santa Clara offices — at the Consumer Electronics Show this week. I saw a computer tuning into local TV stations and getting a GPS signal at the same time.

Over time, it plans on introducing new products that could be used in mobile internet devices, cell phones and other consumer electronics gadgets. The company has about 25 employees, with many of the engineers working in Haber’s country of origin, Romania, as well as Switzerland.

CrestaTech still has a lot of work to finish. And it remains to be seen if people really do want to watch TV on their PCs. Consumers have steadfastly avoided using PCs to replace their current TVs so far.

But with the added benefits that come with location awareness, Haber believes there will be a lot of new uses that result from CrestaTech’s advances. For example, the company has created an application that lets you create a custom channel with just the shows you like. You can then share it with friends via Facebook or MySpace and chat with friends while watching.