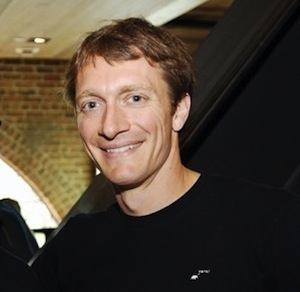 The technology industry needs to think long and hard about ethics, according to Googler Damon Horowitz.

Horowitz has co-founded several startups, and he’s currently a director of engineering at Google (which acquired his latest startup Aardvark). But he also has a Ph.D. in philosophy and apparently holds the title of “in-house philosopher” at the search giant. He spoke today at the TEDx Silicon Valley event at Stanford University, where he offered a slightly more nuanced view than Google’s famous mantra of “Don’t be evil” (which is often used to slam the company when it does something critics consider unethical).

To illustrate how ethics are getting short-shrift in the tech world, Horowitz asked attendees whether they prefer the iPhone or Android. (When the majority voted for the iPhone, he joked that they were “suckers” who just chose the prettier device.) Then he asked whether it was a good idea to take data from an audience member’s phone in order to provide various (and mostly beneficial) services, or whether he should be left alone, and the majority of audience voted to leave him alone. Finally, Horowitz wanted to know whether audience members would use the ideas proposed by John Stuart Mill or by Immanuel Kant to make that decision. Not surprisingly, barely anyone knew what he was talking about.

“That’s a terrifying result,” Horowitz said. “We have stronger opinions about our handheld devices than about the moral framework we should use to guide our decisions.”

The obvious response is that technology-makers aren’t supposed to think about the morality of their products — they just build stuff and let other people worry about the ethics. But Horowitz pointed to the Manhattan Project, where physicists developed the nuclear bomb, as an obvious example where technologists should have thought carefully about the moral dimensions of their work. To put it another way, he argued that technology makers should be thinking as much about their “moral operating system” as their mobile operating system.

Then Horowitz launched into a whirlwind tour of how different philosophers have tried to evaluate morality. At one point, he contrasted Mill, who argued that actions should be judged on the basis of whether they maximized pleasure and minimized pain, with Kant, who argued that there are actions that are intrinsically wrong, regardless of their results.

The point wasn’t to deliver everything you need to know about ethics in 15 minutes. Instead, Horowitz said he wanted to show that philosophers have been wrestling with these questions for thousands of years.

But that kind of ethical thinking is what we require of “every sane person,” he added. Horowitz quoted writer Hannah Arendt, who, in writing about Nazi Adolf Eichmann, argued that most of the evil in the world comes not from bad intentions, but rather from “not thinking.”

To encourage attendees to start thinking more about the morality of their decisions, he asked for 30 seconds of silence where everyone remembered the last decision where they tried to do the right thing. Then he asked everyone to try to articulate how they decided what was right and wrong.

“That’s the first step towards taking responsibility towards what we should do with all of our power,” Horowitz said, later adding, “We have so much power today. It is up to us to figure out what to do.”