Website-building platform Duda has raised $25 million in an equity round of funding from Susquehanna Growth Equity (SGE).

Founded in 2009, Palo Alto-based Duda targets agencies, hosting companies, publishers, freelancers, and anyone that offers web design services to small businesses. The company strives to set itself apart from others in the space by combining several services in a centralized platform and incorporating site-building and collaboration tools. 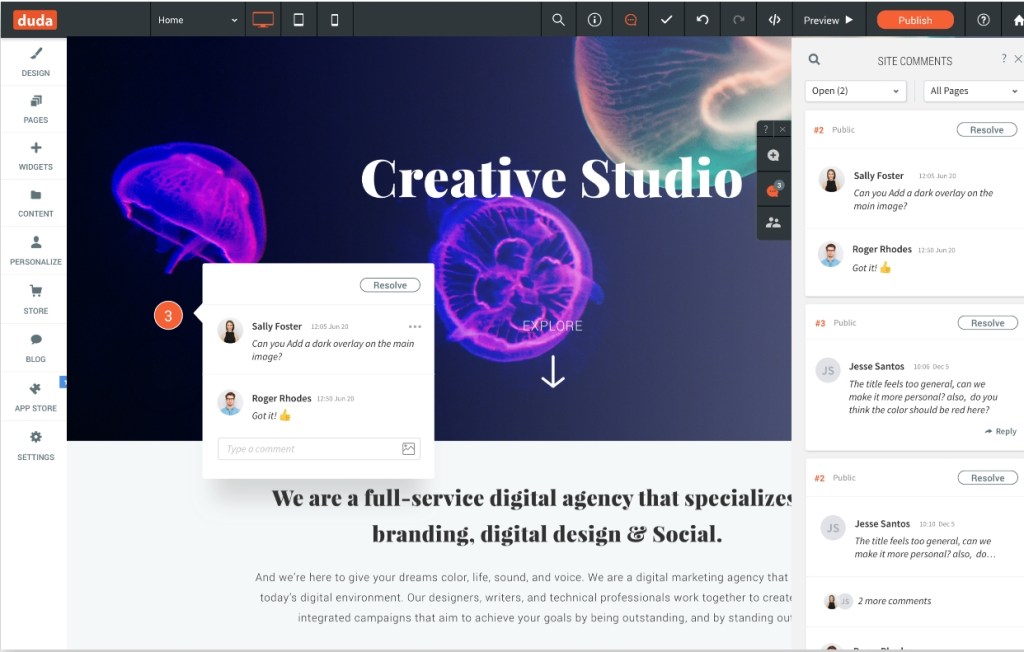 Users are also able to create their own library or templates and sections that customers can reuse on similar projects or offer as part of their design service to their own clients. They can also build and integrate their own widgets.

Additionally, Duda licenses its core technology as a white label service via an API, meaning that third-party software-as-a-service (SaaS) companies can offer their own-brand version of Duda’s design tools. This could be particularly useful for web hosts who may want to branch out into web design services without having to create their own website builder from scratch.

“We are very familiar with the frustration many web professionals experience daily due to the lack of suitable web design platforms,” noted Duda cofounder and CEO Itai Sadan. “Our team has developed a product that integrates all of the components needed for professional-grade web design to effectively serve digital agencies and SaaS platforms and allow them to scale their business.”

In terms of pricing, Duda’s plans start at $14 per month for a basic hosted website, while $22 and $74 plans usher in additional features, such as expanded customer support channels, client management tools, widget builders, and more.

The global website builder market was pegged at $6.5 billion in 2018, according to Zion Market Research, a figure it estimates will rise to more than $13 billion within a decade. As more freelancers, small businesses, and agencies go online, demand will only grow — which is why tools that make the process easier are proving so popular among investors and businesses alike.

Last week, for example, WordPress.com parent Automattic raised $300 million from Salesforce at a $3 billion valuation. Others in the space include Squarespace, which has raised nearly $300 million from investors, and Wix, which has gone from strength to strength on the Nasdaq since its 2013 IPO — its shares hit an all-time high of $155 last month, significantly over its $16.50 IPO price. Weebly, meanwhile, had raised around $40 million before it was acquired by Jack Dorsey’s Square last year.

Duda, for its part, claims that more than 6,000 customers have developed over half a million websites through its platform. The startup had previously raised around $21 million, and with another $25 million in the bank it aims to “accelerate” its sales and marketing push and grow its R&D team, which is based in Israel.

“We have seen tremendous growth in the past year, and this investment will really help us expand the business and boost development to continuously meet our customers’ specialized needs,” added Duda cofounder and CEO Amir Glatt.