Epix is launching its premium movie channel this weekend in a bid to go toe-to-toe with HBO. As we noted in an earlier story, the company hopes to outdo HBO with better shows as well as a modern digital viewing experience enabled by the Internet.

Epix is a joint venture of Viacom, Paramount Pictures, Lionsgate and MGM. The channel will premiere on Verizon’s FiOS TV service, a pay-TV service that’s delivered over Verizon’s super-fast fiber optic broadband network. There are a couple of million FiOS subscribers across the nation, but more are being added every day as Verizon rolls out the service neighborhood by neighborhood. 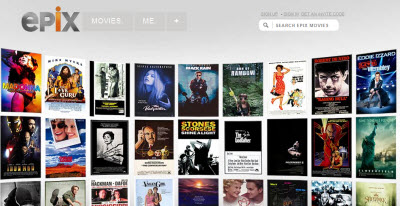 The primary appeal of FiOS is fast broadband speeds. But the Epix channel is another. Even if you aren’t a member, you can try it out for 30 days or get a three-day pass by following the instructions below. Emil Rensing, chief digital officer at Epix, said in an interview that right now only FiOS subscribers can get access to shows on Epix’s web site, EpixHD.com.

The primary benefit of doing that is they can see their favorite shows from any place they can access the web. Viewers can watch those videos on the web at 720p high-definition resolution. The site currently has about 150 movies available in an on-demand mode. By next year, Rensing said there will be more than 3,000 movies, including lots of new releases from the participating studios. That will be available as part of a service called Megaplex for Epix subscribers.

Epix is trying to round up exclusives to make viewers favor it over other pay TV channels. It also offers extras such as interviews with stars and behind-the-scenes documentaries. It’s a lot like the bonus disc you can get with DVD movies. The site also lets you watch a show with up to five friends. As host of this virtual party, you stay in control over the video playback.

You can expect to see a lot of advertising from Epix, Rensing said, as the company places ads on social media and fan sites as well as in traditional media.

The opening weekend line-up includes Madonna Sticky & Sweet: Live from Buenos Aires, Marvel’s blockbuster film Iron Man, and the exclusive comedy special Eddie Izzard: Live From Wembley. It will also have the pay TV premieres of The Curious Case of Benjamin Button, Madea Goes to Jail, Pink Panther 2, Indiana Jones and the Kingdom of the Crystal Skull, Cloverfield and The Duchess among many others.

EpixHD.com will let viewers preview the channel and site on a first-come, first-served basis on weekends during the month of November. Rensing said that in the long run, Epix will have access to more than 15,000 movies from the different studios’ movie libraries.

To get a three-day pass for this weekend, go to http://www.epixhd.com/invite/. Also, Epix will give 30-day VIP get codes via Direct Message to the first 200 VentureBeat readers who follow @epixHD on Twitter at http://twitter.com/EpixHD and tweet “@epixhd Experience Epix #venturebeat”