Facebook today launched Groups for Android and iOS, offering new functionality for a feature that is very closely tied to the social network. You can download the new dedicated app now directly from Google Play and Apple’s App Store.

The Groups app offers a lot more than the basic functionality for discussing, planning, and collaborating most users are accustomed to on the Facebook desktop site and within the Facebook mobile app. Groups for Android and iOS lets you move between your various groups, join new groups, manage notifications, and discover more content. 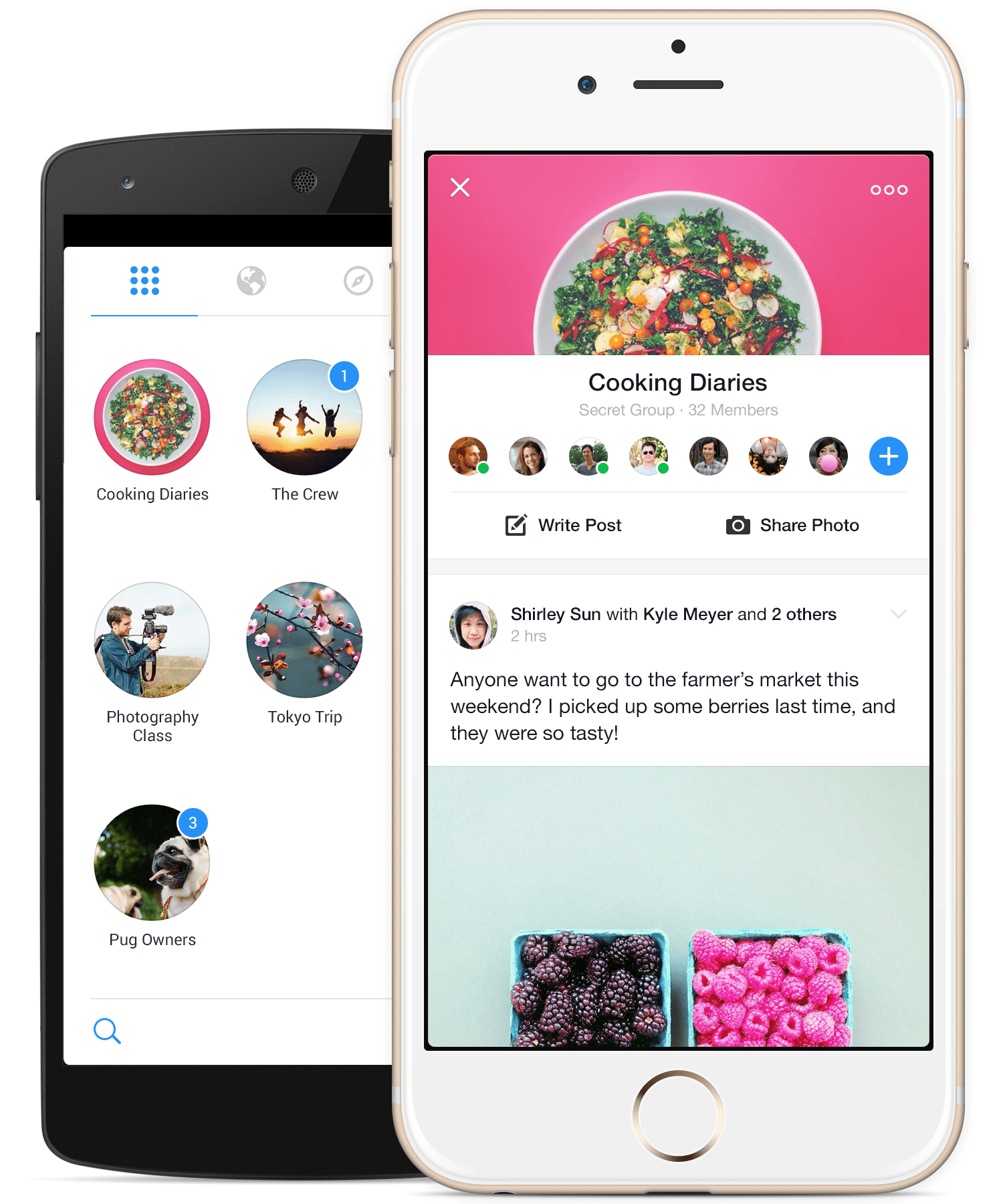 The company says the new app is built for people who use Groups frequently and aims to give them “an easier and faster experience interacting with all their Groups.” It’s worth noting that Facebook is not ripping out the basic Groups feature from the main Facebook app, as it did with Messenger. The company’s reasoning is that “Groups is deeply integrated with News Feed,” “some people prefer to interact with Groups through News Feed,” and “the main app is still the best way to do that” (one day we could hear otherwise, of course).

Mobile app developer?
Get our free report on seven proven tactics to boost your apps rankings.

The app uses the same Facebook token as the company's other apps, so if you have the main Facebook app or Messenger already installed, Groups will ask if you want to continue on as the person who's already signed in. You don't have to login separately to each of the apps.

Here is how Groups looks upon first launch: 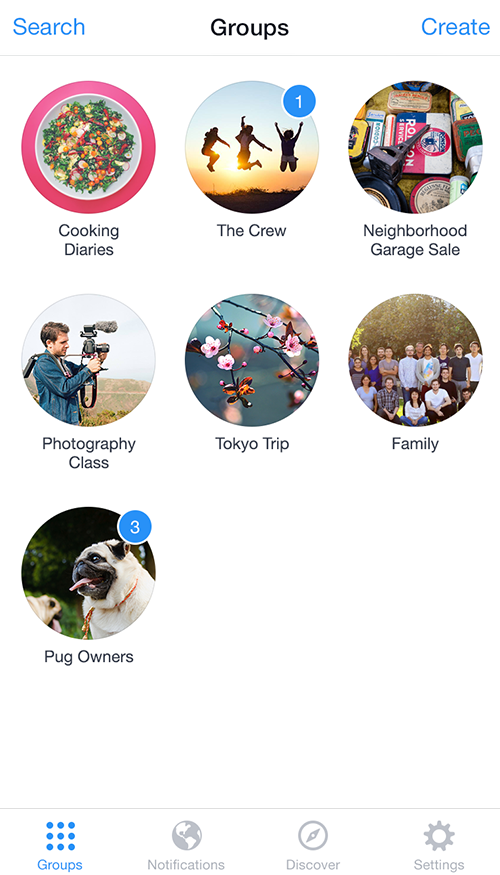 As you can see, it shows all your Facebook Groups in one place. Groups you use most frequently are at the top, and you can quickly move between each group. 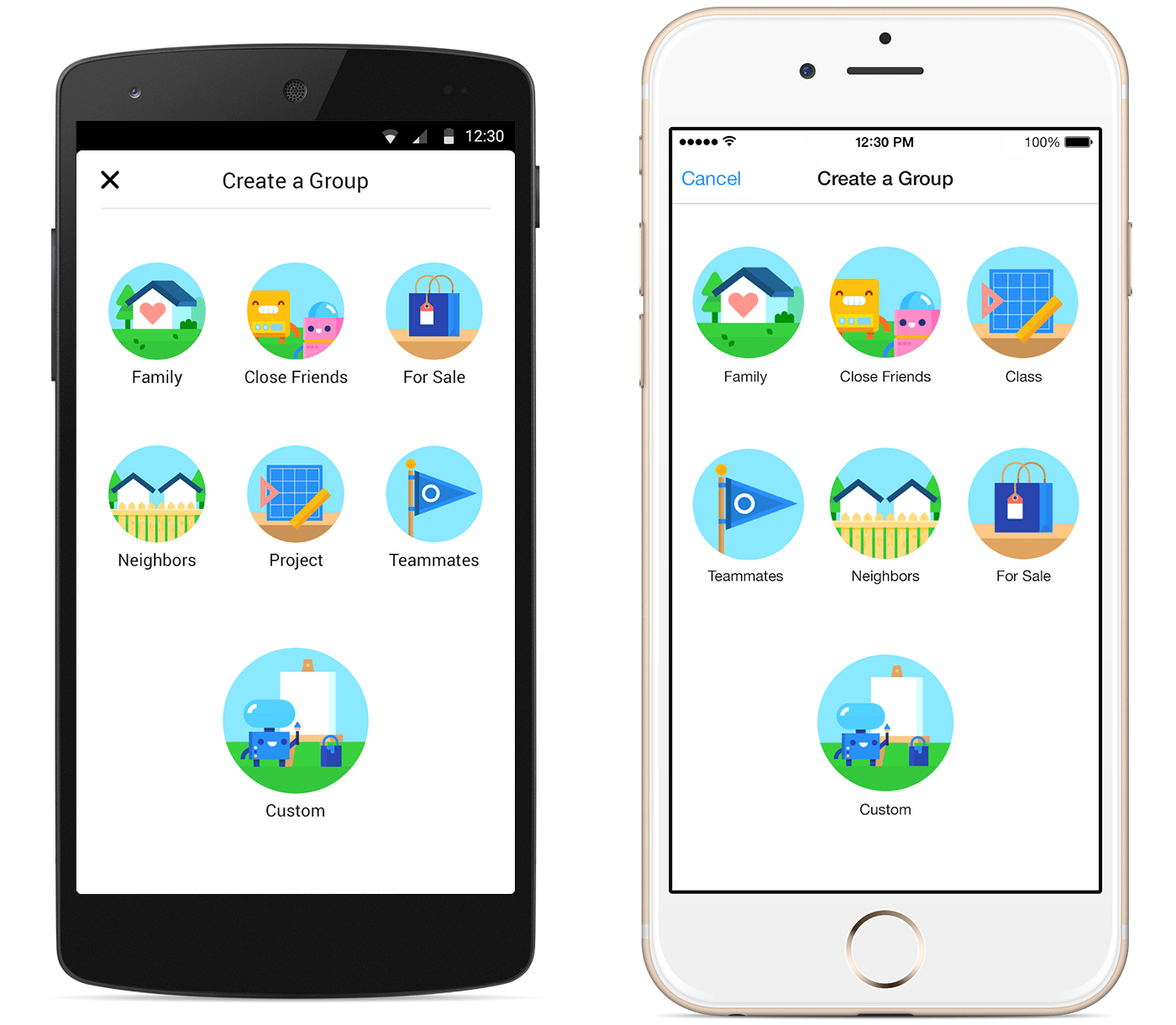 You can easily start a new group by tapping the Create link at the top. Again, this app isn’t simply a copy-and-paste of the basic Groups functionality in the main Facebook app. 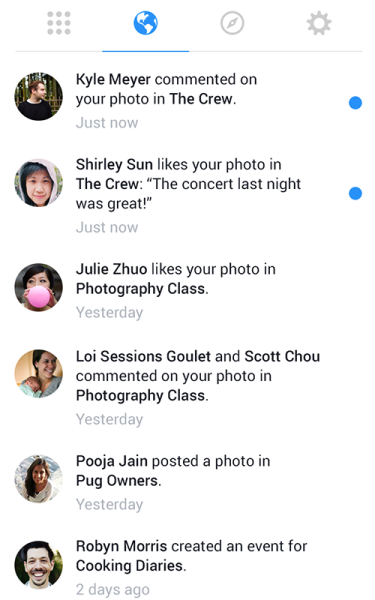 The app uses the same icon for notifications as Facebook’s other apps. You can control which notifications you want to see in the Settings page. 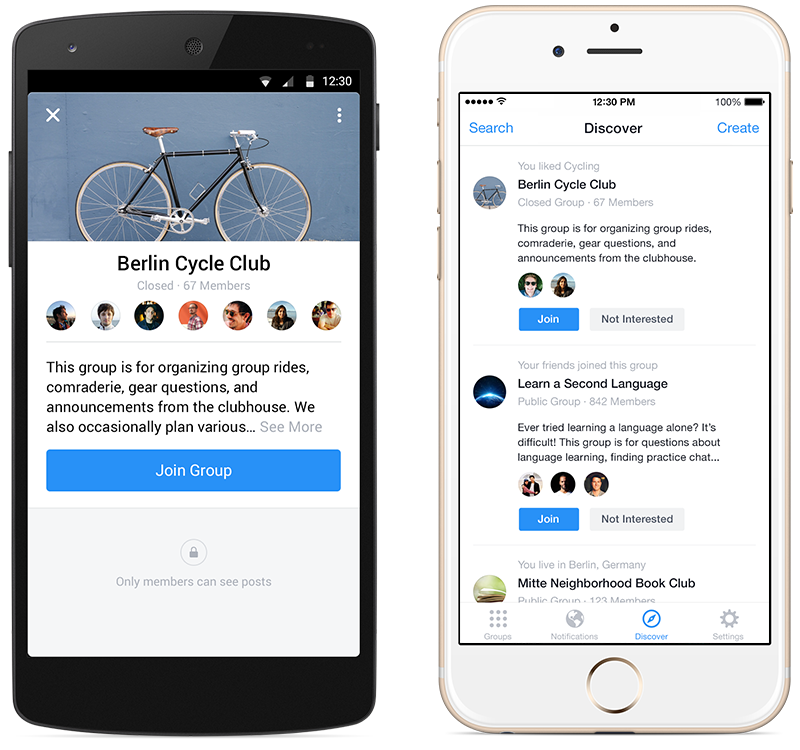 The most interesting addition, however, is the new Discover tab. This is where Facebook suggests groups for you to join based on Pages you’ve liked, groups your friends are in, and where you live.

During Facebook’s most recent earnings report, the company revealed that in Q3 2014, some 700 million people use Facebook Groups every month, up from 500 million the year before. Facebook cited that statistic again today, which would seem to imply that the company sees the Groups app launch as something similar to the launch of the Messenger app rather than its more experimental apps.

Yet the Groups app is built by the company’s Creative Labs — the same team responsible for launching many of those more experimental ones: Paper, Slingshot, Mentions, and most recently, Rooms. This suggests Facebook is definitely less sure of Groups than it was when it launched Messenger.

On the other hand, Groups is launching right away on Android and iOS, in all countries (we asked the company about a Windows Phone version, but it has no plans). Unlike previous app launches, the company isn’t interested in rolling this one out gradually.

Groups is definitely one of the more popular Facebook features, though many have criticized the company for not building it out further. It has long been seen as a lost opportunity, with few updates and many potential new features. There have been rumors of a dedicated app coming for months, with reports heating up in September.

Today’s debut seems to suggest that Facebook is betting on taking the feature to mobile first, experimenting with new functionality there, and then potentially bringing back whatever works to Groups elsewhere on the social network. In fact, the company says that “over time we’ll continue to make [Facebook Groups in the main Facebook app and on desktop] faster and better, too.”

In other words, expect the Facebook desktop site to soon start making suggestions for Groups you should join. The launch of Facebook Groups for Android and iOS is just the beginning of a bigger revamp for the popular feature.