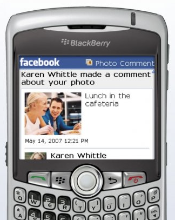 Facebook has announced that third-party developers can integrate features from web-based Facebook applications to work on mobile devices.

Most of the world uses mobile devices, and in many countries, people use phones more than they do computers. With Facebook’s audience rocketing upward around the world, this latest move could encourage higher participation, at least among people who use Facebook applications.

It comes as the company reportedly prepares New York for its new “SocialAds” ad network and tries to finalize a financing deal with either Microsoft or Google that includes rights to its international advertising. We can only assume the deal would include international mobile advertising in Facebook.

However, at least one big app developer — RockYou — is choosing to focus first on integrating with other social networking platforms in order to get more users.

Web, not mobile is how Facebook’s core demographics of users in the US, Canada and the UK access the site, RockYou co-founder Jia Shen told us. Countries like China and India that are big in mobile aren’t big in Facebook.

Mobile apps may be a good way to monetize, though, Shen tells us: “Lots of people are thinking about how to run micropayments through phone bills” as high schoolers don’t have access to credit cards for doing things like buying Facebook’s virtual gifts.

Facebook users can choose to send and receive text messages from applications and otherwise poke, prod, needle, “throw food,” and perform other gimmicky actions on applications.

Blackberry owner Research In Motion has also released a customized application for the device (see screenshot).