Facebook announced today that it was opening up its Messenger platform in beta to let chatbots into the app. What this means is that you’re now able to interact with an AI-powered “representative” from a business within one of the largest social networks around.

At the F8 developer conference, David Marcus said that product enhancements on Messenger means that more people are using it every day. “People love to interact with businesses within Messenger,” he said. “The future we’re going to build will be even more exciting.” Before the Internet era, Marcus stated, everything was conversational — you had to actually talk to a person to get what you wanted. Then the Internet allowed interactions at a much larger scale. The mobile era offered stripped-down versions of web content in the form of apps. But we download fewer and fewer apps; meanwhile, mobile web is frustrating, and we still call businesses time to time when we need to deal with urgent issues. In this morass, Messenger offers some good properties: instant and persistent user identity, presented in context.

To date, Facebook says, more than 50 million companies operate on the social network, with more than 1 billion business messages sent every month. This is a compelling reason for pursuing bots within Messenger. Marcus said that the Facebook Messenger Platform allows developers to build bots for Messenger using its send and receive API: All bots will keep your identity and send and receive text, images, buttons, bubbles, and calls to action. “In order to build a great experience, you need a combination of UI and conversation. We think the combination of UI and conversation is what is going to work,” he explained.

Facebook is offering prominent user controls at the top of every thread that allows you to block specific messages or entire conversations to make sure that “you are always in control of your messaging experience,” Marcus said. There are also discovery tools that can be incorporated into websites, along with password-free login tools, which were announced earlier at F8.

To accelerate development, Facebook has also developed a bot framework built off of Wit.ai.

Facebook has been investing more resources into Messenger in the past couple of years, especially after extracting it from the core app. And what it has done certainly has propelled a massive uptick in adoption by the social network’s 1.59 billion monthly active users, with more than half of them accessing Facebook purely on their mobile device.

Chatbots are meant to engage customers in a medium that they’re comfortable with, making responses real-time instead of having to trade back-and-forth communications via email or talk on the phone. Bots could also enhance the capabilities of Facebook’s “M” personal assistant. In August, the company claimed that M “can actually complete tasks on your behalf. It can purchase items, get gifts delivered to your loved ones, book restaurants, travel arrangements, appointments, and way more.” 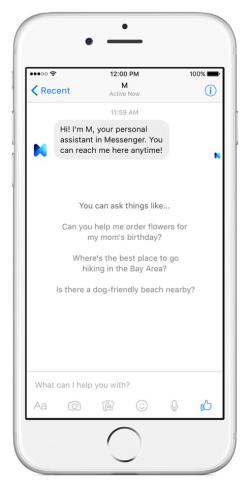 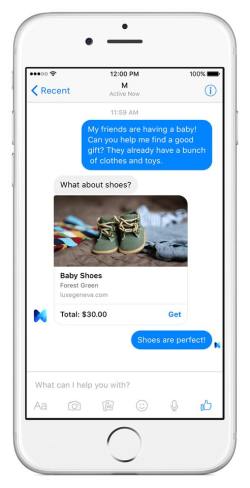 Is this new form of customer service going to stick for brands eager to tap into the massive audience on Facebook Messenger? Some think it’s not the right way to go because it lacks the human interaction that makes customer service personal. Call center software provider Five9‘s vice president of product marketing Mayur Anadkat told VentureBeat, “Complex customer interactions should certainly be left to the live agent who can read the situation and react accordingly.”

However, Yahoo’s senior vice president for product and engineering around advertising and search Enrique Munoz Torres said that companies should embrace bots. He believes that user behaviors have changed. “Users are increasingly more comfortable with conversational interfaces, and they expect that systems will be able to handle complex requests,” he said. In addition, messaging is evolving from applications to platforms.

“These developments will definitely impact search,” he continued. “Moreover, it can drive users to ask questions that they currently would not enter into a search engine, like ‘What should I do this weekend?’. Having bots be able to address these complex questions, let alone complete the actions in a really comprehensive way, would be transformative. We, at Yahoo, find this problem to be fascinating and worth exploring.”

Taking its place in the bot race

Reports about Facebook chatbots first surfaced in January with revelations of an SDK that allows developers to build these conversational tools within Messenger.

The launch of chatbots and a live chat API comes a year after Facebook launched its Messenger platform. The goal then was to allow people to express themselves in a new way and make their conversations better. The app started off supporting deep linking within conversations, along with 40 third-party integrations that included Giphy, ESPN, Imgur, and The Weather Channel.

Facebook’s Marcus also revealed an offering called Messenger for Business. With it, users are able to communicate through Facebook Messenger with participating businesses — mirroring what WeChat has offered for a while. Marcus explained that the new service is helping people “communicate more naturally” and can “vastly improve people’s lives.”

Many Facebook competitors have adopted bot technology much more quickly, including WeChat, Telegram, Kik, Slack, Microsoft and Skype, and Line. However, with more than 900 million users on its Messenger service, Facebook’s entry could have a substantial effect on the industry.