Mozilla updated Firefox Focus for Android today with cookie management and autocomplete improvements. You can download the latest version of the company’s privacy browser now from Google Play.

Firefox Focus offers privacy benefits and performance gains by blocking many web trackers, including analytics, social, and advertising. Mozilla first launched an iOS version in November 2016, and followed with the Android release in June 2017. Because Google isn’t as strict as Apple, Android users have a lot more flexibility than their iOS counterparts, like being able to set Firefox Focus as their default browser.

The biggest highlight in today’s update is additional tracking protection against advertisers, which Mozilla is trying to spin as showing the company is well ahead of the curve given Europe’s implementation of the General Data Protection Regulation (GDPR) later this month. The company says Firefox Focus is “well positioned as the go-to mobile product in the Age of GDPR.”

PR nonsense aside, Firefox Focus is getting useful improvements in this department. The new cookie management feature lets you control the source of trackers that are following you. You can now protect the visibility of your online activity by blocking cookies on all sites, from third-party sites, or not blocking any at all (Settings => Privacy & Security => Cookies and Site Data). The feature can be turned off in case it breaks some sites, such as those that depend on cookies from third-party sites. 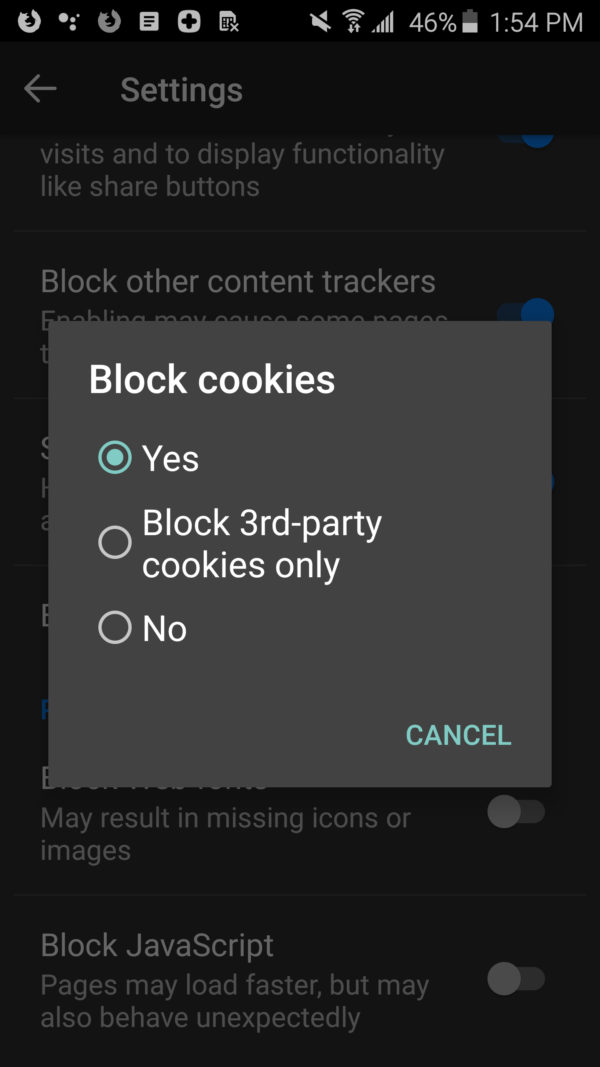 Until now, Firefox Focus blocked all first-party trackers of sites that were commonly known to follow users from site to site. The feature uses a blocking list published under the General Public License and based on the tracking protection rules laid out by the anti-tracking startup Disconnect. Anyone can view that open source blocklist over on GitHub.

Next, Firefox Focus now supports autocomplete, although it works a bit differently than in your typical browser. Users can now long-press the URL bar to add a site to Firefox Focus’ URL Autocomplete list.

This step is required in Firefox Focus on purpose, since the browser by default doesn’t save anything after you close it. Firefox Focus has supported adding favorite sites to an autocomplete list, but that required manually doing so under Settings. This way is a bit faster.

Firefox Focus keeps getting better. After Mozilla added tabs, I called it the only Android browser worth installing.

But the browser is becoming less differentiated — Mozilla turned on tracking protection in Firefox for iOS last month, making Firefox Focus for iOS a lightweight but no longer unique offering. The company could do the same on Android; “We will evaluate the opportunity based on usage for the iOS version,” Firefox product lead Jeff Griffiths told VentureBeat at the time.